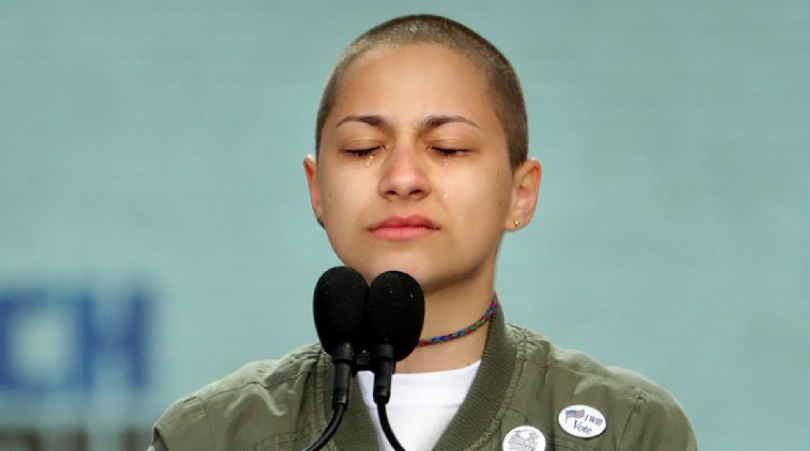 The young speakers who took the stage, one after the other, at Saturday’s #MarchForOurLives rally held in Washington D.C.—the largest of the 800 plus sister events held around the world—were astonishingly poised, articulate, moving, and memorable.

Even Samantha Fuentes whose adrenalized nerves got to her causing her to throw up on stage. Or maybe especially Fuentes, who took a bullet in her thigh and whose face was lacerated by shrapnel during the Parkland shooting.

“I just threw up on international television, and it feels great!” when she returned to the mic, and then went on to deliver a powerful speech.

There was also eleven-year-old Naomi Wadler, an Alexandria fifth-grader, who quoted Toni Morrison in her speech 3-minute 30-second speech. When she talked of representing the “African American girls whose stories don’t make the front page of every national newspaper” and the “African American women who are victims of gun violence, who are simply statistics instead of vibrant, beautiful girls full of potential..” she spoke with more poise and moral heft than most 35-year-olds could muster.

Representing Los Angeles, there was 17-year-old Edna Chavez from South LA, who, like Wadler and others from Chicago and elsewhere, also pulled the conversation away from mass shootings, to neighborhood gun violence.

“..I have learned to duck from bullets before I learned how to read,” she said to the crowd.

Later she asked those gathered to say the name of her brother who, when he was still in high school, was shot to death outside her family’s home.

Chavez told of watching her older brother’s skin turn ashen as his life drained out of him. “Ricardo was his name,” she said.

First González described with calm ferocity the terrible after effects of the mass shooting she and her friends had lived through, and named each of the seventeen who had been killed at Marjory Stoneman Douglas High School on Valentines Day of this year, and the ten thousand small actions of living they “would never…” do again.

Then she stopped speaking and was absolutely silent for four minutes and 26 seconds, staring straight ahead, unmoving, as tears rolled down her cheeks, and her breathing occassinally turned labored and rough with grief, and the crowd—which had no idea what González was doing—mostly gazed back at her transfixed.

Finally, a timer went off.

“Since the time that I came out here, it has been six minutes and 20 seconds,” González said, after shutting off the timer. “The shooter has ceased shooting, and will soon abandon his rifle, blend in with the students as they escape, and walk free for an hour before arrest.

“Fight for your lives, before it’s someone else’s job,” she said. And then she left the stage.

Yet, the impassioned young people who attended marches all over the nation were also impressive, including those in states like Montana, Texas, and Oklahoma where, for a great many kids, learning to shoot is an important and valued right of passage.

But, will all this passion translate into the kind of sustained action that results in legislation?

No one yet knows, of course. But elements of that answer may be found in a number of places.

First some numbers on gun ownership

As most of you already likely know, a look at polling on the matter suggests that most Americans are in favor of stronger laws regarding gun ownership. This includes the majority of Americans who own firearms.

“Americans have a deep history and a complex relationship with guns. A point of pride for some and a source of fear for others, guns continue to ignite sharp debates in our society,” writes Ruth Igielnik and Anna Brown of the Pew Research Center—stating the obvious on the topic of guns.

According to a 2017 Pew poll looking at the demographics of gun ownership, three in ten Americans own guns themselves.

This leaves seventy percent of Americans as non-gun owners. But a little over one out of ten who don’t have guns of their own, live in a household with a gun.

And 48 percent of those surveyed grew up in a house where a gun or guns were present.

Most gun owners say that the primary main reason they own a gun is for protection. As one might guess, the next most common reason for gun ownership is for hunting.

Sport shooting is a close third, when it comes to the list of reasons why people own firearms.

As for stronger gun laws, highest on the list of favored legislation according to the Pew poll is preventing the mentally ill from getting access to guns.

But, eighty-four percent of Americans, according to Pew, also want background checks for all gun purchases, including private sales and at gun shows.

Nearly 77 percent of those who favor background checks for all gun transfers are gun owners.

Quinnipiac University of Hamden, CT, began doing polls on the issue of attitudes toward gun legislation after the Sandy Hook shooting in December 2012.

On February 20 of this year, Quinnipiac released a new national poll, which the university said showed a sharp increase over all its previous national polls on the topic.

According to Quinnipiac, in this new poll American voters support stricter gun laws, 66 to 31 percent, with 50 to 44 percent of gun owners expressing the desire for stronger laws.

Support for universal background checks was almost….well…universal, scoring 97 in favor, versus 2 percent, against. Among gun owners, the numbers were 97 to 3 percent.

The new poll also showed a 67 to 29 percent split favoring a nationwide ban on the sale of assault weapons, and 83 to 14 percent favoring a mandatory waiting period for all gun purchases.

“In the last two months, some of the biggest surges in support for tightening gun
laws comes from demographic groups you may not expect, independent voters, men, and whites with no college degree,” said Tim Malloy, assistant director of the Quinnipiac University Poll.

Yet, despite year after year of poll numbers suggesting that the majority of Americans want stronger rules for how the nation deals with its guns and ammo, as the students who have made this issue their own have pointed to repeatedly, except in very blue states, gun regulations are difficult to pass, and on a national level, passing stricter gun laws has, in recent years, been all but impossible.

So, does the outpouring of support for the students who spoke so eloquently this past Saturday mean that lawmakers will behave differently than they have in the past?

On that count there is both bad news and good news. (Which is which depends, one presumes, on where you sit on the pro/con stronger gun laws spectrum)

In addressing the question, stories in both Vox and in the New York Times point to the element that has prevented the passage of new legislation in the past. Call it the passion gap.

Vox reporter German Lopez points out that most polls find that a majority of Republicans back universal background checks, a ban on assault-style weapons, a federal database to track gun sales, prohibitions on people with mental illness, and barring people on no-fly or watch lists from buying firearms.

“In fact,” he writes, “GOP support for three of these policies tops 75 percent.”

Where the problem develops for those who favor tougher gun legislation is the matter of “issue intensity,” as German puts it.

Roughly translated this means that although lots of Americans support gun control, “it’s not really their top priority when they go out to vote.” Meanwhile, those who oppose stricter gun laws “are simply more likely to make it the one issue they’ll vote on.”

She point to a Maine ballot measure that would have instituted universal background checks in the state. Polling suggested the measure would pass, but instead it crashed and burned in defeat.

“We know for a fact we lost the argument at the kitchen table and the bar and the bowling alley,” David Farmer, one of the ballot measure’s lead supporters told Sanger-Katz “The gun enthusiasts were talking to their friends and relatives and neighbors. They felt about it in a way that was so passionate that they won those one-on-one encounters, and they were very successful in bringing in people to their side.”

Research from Pew shows that gun advocates are also more likely to talk to theirlawmakers, or to give money to organizations that will fight for their issue. That passion gap sends a signal to legislators, writes Sanger-Katz, letting them know “that there is robust opposition even to laws that show strong public support in polls.”

The NRA ups the intensity

It is news to exactly no one that the National Rifle Association gives mountains of money to the campaigns of those running for office whose positions on gun legislation it likes. And, for those running for office who favor tough gun laws, the NRA will spend additional mountains of cash for ads in opposition to those gun-regulation-friendly candidates.

Much of the NRA’s advertising is, of course, also directed at consumers, which means that a large portion of its ad buys are made in digital media.

Interestingly, according to a story by science writer Katharine Gammon published this past Friday in the Chicago Tribune, immediately after the mass shooting at Marjory Stoneman Douglas, which resulted in the murder of seventeen students and teachers, the NRA suddenly stopped all of its digital consumer advertising, including ads on YouTube, banner ads on websites, and Facebook.

The pause in ad placement lasted a little over three days. Then around day four, just as the passionate call for gun regulation expressed by the Parkman survivors unexpectedly and stunningly began to catch fire, the NRA not only resumed its digital advertising, the organization quadrupled its buys.

The Tribune found that, according to research done by a company called Pathmatics, which “scrapes data from online ads,” the NRA’s average daily spending on digital ads in the 24 days before Parkland was $11,300. Then in the 24 days after its blackout period, that daily average “jumped to $47,300.”

That’s nearly eight times more than prior to the Parkland massacre.

Presumably, the NRA hopes to make sure the “issue intensity” scales continue to tip in its favor.

Yet, the students who have captured so much of the public’s imagination in the last few weeks, have also persuaded a healthy number of adults to up-their intensity quotient on the issue—at least for the moment.

Will it continue? Will it lead to concrete change? There is no one who can definitively answer that question. For this, we must all….stay tuned.