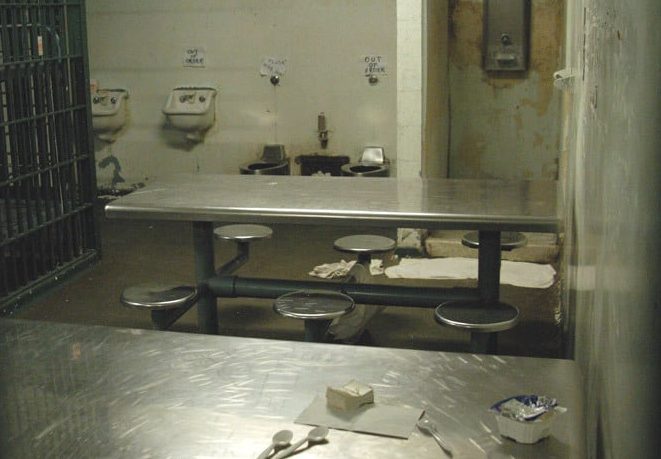 At noon on Monday, March 16, Los Angeles County Sheriff Alex Villanueva held a press conference —which was also online — to update everyone on issues related to the COVID-19 crisis, its effect on policing and, most critically, its impact on the vulnerable populations inside the county’s jails, which includes those whose job it is work in the jails. 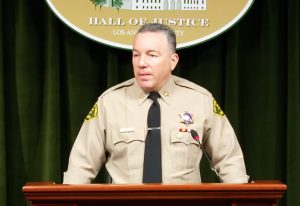 The sheriff’s manner was very calm and reassuring.

He talked about all the ways he and the department were working hard to make sure that law enforcement services in the areas the LASD serves would be uninterrupted by the coronavirus, and what kind of personal protective equipment to all field personnel were being issued including, masks, gloves, goggles, and more.

He explained that staff vacations had been canceled through the end of April, and those working “non-essential assignments” would be temporarily moved to custody or patrol assignments when necessary to make sure those most crucial areas were adequately staffed.

But it was when Sheriff Villanueva began to talk about the steps he had just taken to lower the population in the county’s enormous jail system that things got really interesting. 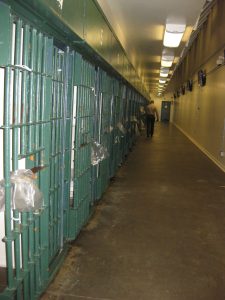 Yet, as of today, he told reporters who ventured out for the press conference (plus everyone who was listening online) the population had dropped to 16,459 — which was a difference of 617 people.  And this was a total that Villanueva expected to drop still farther.

The art of dropping the jail pop

The sheriff outlined three big changes that had allowed him to decrease the jail population so rapidly in a little over two weeks.

First, Villanueva said, he ordered the release of anyone who had less than 30 days left on their sentence.

Second, he said, the LASD plus the other law enforcement agencies throughout the county were reducing their number of arrests during the COVID-19 crisis, so fewer people entered the jails in the first place.

The average arrest rate across the county, Villanueva said, is normally around 300 arrests per day.  But, in the last week, that number has come down to “about 60 arrests per day,” he said.

The precipitous drop had occurred because LA County Sheriff deputies, along with the LAPD and various other city police forces within the county, were “doing a good job of triaging who it’s necessary to arrest,” and who didn’t need to be cited, Villanueva said.

The third big change the sheriff was making that aided in the drop of the jails’ population had to do with bail. 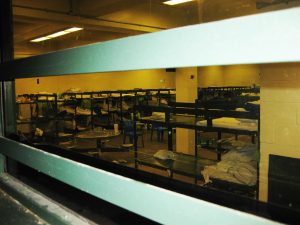 Prior to COVID-19, he said, the “aggregate bail amount for booking inmates into custody was $25,000,” meaning if your bail was set at $25,000 or higher, you would wind up in county jail — unless you came up with the money or paid a bail bondsman a non-refundable ten percent of your bail amount to pay the cash for you.

Yet, Villanueva found he had the authority to raise that ceiling to $50,000, which allowed more people who were arrested to just receive citations, rather than getting booked into custody. He decreed the new bail standard would apply, “even when there are warrants.”

In general, Sheriff Villanueva said he has directed all local agencies to “cite and release” whenever possible, meaning those people who were cited had to show up at court, but did not have to languish in jail in the meantime.

“This reduces the number of people entering our jail facilities,” said Villanueva, which would, therefore, lower “the chances of the virus being introduced into that environment.”

Villanueva found that he could make these changes under his own authority via California’s Penal Code. (He didn’t mention which part of the code, but likely it is this one.)

Sheriff Villanueva also appeared to feel quite comfortable that he could use these various tactics that were successfully reducing the jail population without harming public safety.

Of course, Villanueva’s strategies also cannot help but raise a question:  if arrests can be reduced from 300 to 60 in the space of a week, and the jail population can be dropped by more than 600 people in two weeks, with those numbers evidently expected to keep dropping as these various successful strategies are continued, why can’t LA County similarly reduce arrests and life-upending and unnecessary stints in jail even when we’re not faced with a worldwide pandemic?

As readers might remember, it was one short week ago that, with a motion authored by Supervisors Sheila Kuehl and Mark Ridley-Thomas,  the LA County Board of Supervisors voted unanimously to accept a 98-page report from the 25-person Alternatives to Incarceration workgroup (ATI).

This ATI group was made up of members of several county agencies — including two from the LASD –plus justice advocates, and members of LA County’s various communities.  It was led by Dr. Robert Ross (who in his day job is the head of the California Endowment), and the group had been working since early last year to create a roadmap for a new countywide system designed to provide “care and services first,” and to use jail as the last resort.

Serendipitously, the sheriff’s COVID-19 strategies appear to be a tangible and very welcome step toward the rebalancing that the ATI report points toward.

His strategies also overlapped with a recent letter from justice advocates, and another letter from the ACLU, both of which were delivered in the last few days to Sheriff Villanueva, the board supervisors, and other county officials, describing changes that need to be instituted in the jails and the courts because of the virus.

On March 12, Peter Eliasberg, Chief Counsel of the ACLU of Southern California, and Jacob Reisberg, its Jails Conditions Advocate, wrote the sheriff about policies for the jails having to do with the crisis that include the early release that the sheriff is now practicing,  plus the “cite and release” strategy — along with various safety and cleanliness suggestions pertaining to the jails.

Then on March 13, more than 40 organizations — including Dignity and Power Now, Human Rights Watch, the Youth Justice Coalition, the Antirecidivism Coalition, Homies Unidos, Public Counsel, and around 38 more — sent their letter to the board and the sheriff.  They also sent the letter to Los Angeles District Attorney, Jackie Lacey,  head of the LA County Department of Health Services, Jackie Clark, plus the two main judges of the LA Superior Court, Hon. Kevin C. Brazile, and Hon. Sam Oht.

Each addressee got his or her own list of strong suggestions from the advocates.

When it came to the sheriff, judging by Monday’s press conference, he was already well on the road when it came to putting several of their recommendations into operation.

One suggestion by the justice advocates to Sheriff Villanueva, in particular, seemed missing from his existing strategies to lower the jails population during this period at least, is the request to “suspend arrests and/or booking of individuals suspected of technical parole or probation violation,” which are “behaviors that would not warrant incarceration for people not on parole or probation.”

But we have a long strange road ahead of us when it comes to our new and frightening virus, so there’s still time to add promising strategies.

Unfortunately, lowering the jail population only solves so much.

Most of the county’s facilities are reportedly still huge Petri dishes due to the large numbers of people—staff and incarcerated individuals—who are crowded in small, confined spaces with poor ventilation and too often less than perfect hygiene and cleanliness.

As WitnessLA reported recently, after four-and-a-half-years under a Department of Justice oversight, the basic needs of the jails system’s mentally ill are still not being met, a tragic fact that continues to demonstrate itself in devasting ways (as an upcoming story will report yet again).

According to Supervisor Mark Ridley-Thomas, when members of the Sybil Brand Commission went recently to Central Regional Detention Center, which is the county’s large women’s jail located in Lynwood, CA, they noted a lack of staff preparedness around COVID-19, “as well as poor hygiene and substandard living conditions,” Ridley Thomas said in a statement.

And as the advocates pointed out in their March 13 letter, in L.A. County, we have an aging jail population that the Sheriff’s Department has described as “unwell.”

Then, of course, there are all the kids who are in the LA County Probation’s juvenile halls and youth camps.  As with the jails, all visits to the youth facilities are suspended because of the virus, although kids are reportedly supposed to get extra phone time with their families.

In the notification sent out last Friday, March 13, we learned that probation’s Management Services Bureau “is instructing janitorial services at facilities to ensure all bathrooms and staff quarters (where applicable) are cleaned daily and have readily available hand soap, paper towels, toilet paper, hand sanitizers, and disinfectant.”

As with the jails, it would seem that such daily cleanings and the availability of soap, paper towels, and the rest should be standard procedure without a pandemic.  (More on these issues later.)

And, as the sheriff has begun to do with the jails, this might be a good time to look hard at whether all the kids in the various halls and camps really need to be there.

As we were working on this story, other groups continued to weigh in.

Early on Tuesday morning,  31 elected prosecutors representing over 17 million people across the country issued their own joint statement on the topic of the pandemic and lock-ups,  recommending a list of actions to mitigate the spread of COVID-19 among the 2.3 million adults and children held in prisons, local jails, youth correctional facilities, immigration detention centers, and other forms of confinement.

A few hours later, more than 40 current and former probation and parole executives from across the country, as well as The National Association of Probation Executives, sent us their statement.

It provided suggestions regarding how to limit the impact of coronavirus through correctional population reduction measures.

The recommendations prominently include suspending or severely limiting technical violations for the duration of the coronavirus crisis, along with “reducing intake onto probation and parole” to only those who absolutely need to be under supervision.”

As with the sheriff’s strategies, the prosecutors’ and probation execs’ ideas would also seem to apply to life beyond the COVID-19 world we presently inhabit.

“We must act now to reduce the existing detained populations and incarcerate fewer people moving forward,” she said. “In doing so, we can not only help to reduce the spread of infection but also bring home people who no longer present a safety risk to their communities.”