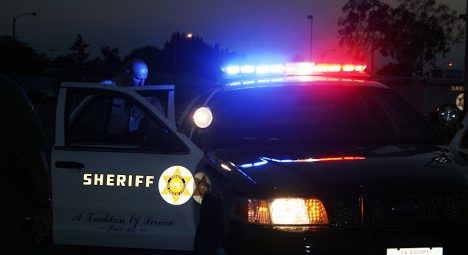 At around 7 p.m., on Saturday night, two Los Angeles Sheriff’s deputies, one male and one female, were shot while sitting in their patrol vehicle in Compton, in what appeared from the beginning to be a deliberate ambush.

The deputies were both struck multiple times in various parts of their bodies, and transported to a local hospital where, according to a 7:51 p.m. tweet by @LASDHQ, they were “fighting for their lives.”

Moments ago, 2 of our Sheriff Deputies were shot in Compton and were transported to a local hospital. They are both still fighting for their lives, so please keep them in your thoughts and prayers. We will update this thread with information as it becomes available.

As of Sunday 6 p.m. the two deputies were still in critical condition.

Saturday night, however, the facts of the ambush shooting trickled in slowly. First a sheriff’s department spokesperson said each of the deputies was shot multiple times.

As of 8:22 p.m., both were undergoing surgery, and Sheriff Alex Villanueva was present at the hospital, at St. Frances Medical Center.

The suspect who shot the deputies was — and is still — at large.

More than a dozen homicide detectives were sent immediately to the scene of the shooting, according to Homicide Captain Kent Wegener who, together with Sheriff Villanueva, spoke at a 10 p.m. press conference outside the hospital.

We he took the mic, the sheriff said the deputies were out of surgery.  He described one of the injured deputies as a 31-year-old mother of a six-year-old boy. Her husband was at the hospital with her, said the sheriff.

The male deputy, who is 24-years old, also has his family and his girlfriend with him at the hospital, and was able to be questioned by investigators.

The shooting occurred at the Metro Blue Line station at Willowbrook Ave. and Compton Blvd., which is not far from the Compton Sheriff’s Station.

The two critically injured deputies are members of the department’s Transit Services Bureau, not patrol deputies.  (TSB is the bureau  that is tasked with providing policing services to Metro buses, trains, and the like, throughout Los Angeles County.)

The shooter reportedly walked up to their vehicle and fired multiple times through  the window, then ran off and vanished.

The LASD has posted a surveillance video on Twitter that shows the suspected shooter firing on the deputies.

In the disturbing video you can see someone clad in a dark shirt over a white shirt, and dark shorts walk rapidly up to the front passenger window of the LASD patrol car, which is parked at the Metro station.

The person then raises his/her right arm and fires several times very quickly at close range, and takes off running. The passenger side door opens, presumably by one of the injured deputies who is trying to get out, several seconds before the video ends.

The deputies were able to radio for help. And, the male deputy, who was able to be interviewed, gave a description of the suspect who was reportedly male.

Both deputies are comparatively new to the department, and were sworn in just 14 months ago, according to the sheriff.

“It’s a sober reminder that this is a dangerous job,” he said, “and actions, words have consequences and our jobs don’t get easier because people don’t like law enforcement.”

Then the sheriff asked everyone to have a prayer for the two deputies to recover.

Update: The gunman walked up on the deputies and opened fire without warning or provocation. pic.twitter.com/cBQjyKkoxJ

Earlier on Saturday, community marchers gathered in South Los Angeles to protest the shooting death of Dijon Kizzee, and many department members were deployed to that area.

Tensions have been high as community members continue to hold demonstrations over their ongoing distress over the Kizzee shooting, as was illustrated on Friday at a peaceful daytime press conference organized by the National Lawyers Guild LA, was met by deputies in riot gear, one of whom allegedly assaulted an attorney who was filming him.

The video of tonight’s shooting of the two sheriff’s deputies was retweeted by President Trump this evening, with the message, “Animals that must be hit hard!”

The president’s tweet was followed up by a stream of others who tweeted about the necessity of arming themselves to support the police.

Also, this evening outside the St. Francis Medical Center, where the sheriff’s 10 p.m. press conference was held, and the two deputies who were ambushed are being treated, it appears that KPCC reporter Josie Huang who, with KPCC’s Frank Stoltze, had been covering the story for hours, was taken down to the pavement by five deputies, handcuffed, and taken away in a patrol car.

According to veteran reporter Stoltze, Huang is accused of having violated 148 PC, “which is obstruction of justice,” he said.

“They are not giving any details,” Stoltze wrote in a tweet just after midnight.

“They’re taking her to the Century Regional Detention Center now. This kind of treatment of a respected LA journalist is disturbing.”

At 1:30 a.m. Sunday, we confirmed that KPCC and LAist’s Josie Huang, an award-winning reporter was indeed charged with “obstructing the work of a police officer and resisting arrest.” She is being held at the Century Regional Detention Center, and KPPC is working to have her released.

Evidently, the five deputies who arrested Huang, reportedly did not manage to get her phone and wallet when they took her, but left them on the ground.

A reporter from ABC7 kindly picked them up and returned them to one of Huang’s colleagues. Huang appeared to be wearing her press credentials around her neck.

LAist reported on Sunday morning, that Huang was released from Century Regional Detention Center at about 4 a.m. without bail, but was cited with the obstruction charge. According to LAist, a KPCC newsroom executive said Huang had visible bruises and scrapes, a sore shoulder and a blackened eye.

LAist and KPCC called for an apology from the department. Undersheriff Tim Murakami repeatedly said he would look into the incident.

In the meantime, like so many others, we are all holding both injured sheriff’s deputies and their families in our thoughts.

Last night I was arrested and charged with obstructing a peace officer by @LASDHQ after videotaping their interactions with protesters in Lynwood. This is what I remember and what I have on video and audio.