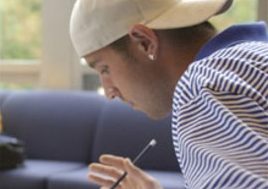 High school teacher and author, Dennis Danziger, if you’ll remember, is the person who introduced us to the wonderful young writer Nina Montoya.

Over the next few weeks, he will be telling a true story that began in his classroom.

In it, Danziger explores what happens when a really great, really decent, really talented kid you know is accused of doing something terrible.

Here is the first chapter.

THE WRITER: CHAPTER ONE

At first, he was just another guy in my first period, 12th grade English class at Venice High School.

Not one of the guys who hides his face in his hood or sits so far in the back of the classroom, back near the windows, that he seems to be outside looking in . He wasn’t a goofball. Didn’t work the room, going from girl to girl trying to get their numbers so he could hook up with them later on. Wasn’t a stoner or a drinker who sat, then put his forehead on the desk and zoned out because he was on maybe two hours of sleep. Wasn’t a jock yakking about how great Kobe is or showing off the cleat marks from yesterday’s soccer practice. Or one of those perpetually tardy guys who slink in 25 minutes late carrying a Frappaccino as if it’s perfectly normal to come late because the line at Starbucks was long.

He was just another guy in my first period, 12th grade English class, Expository Composition.

What was different about John Rodriguez was that he volunteered to read what he wrote. Every day in class I give writing prompts. Random stuff that has nothing to do with what we’re studying. Most students are shy. They might go four or five weeks at a time without reading a word they’ve written. And I never call on anyone. So if a student reads his work work, it’s because he’s eager to share it.

John didn’t emote like a bad actor when he read. He didn’t look around as if expecting applause when he finished. But he responded to all the prompts seriously. And he read pieces of his work every day. He put himself out there, risking the judgment of his classmates. He seemed to care about school, about his education.

The first essay I assigned was a 500-word job entitled, “Home.” Whatever one thought of as home, be it a bedroom, a street, a soccer field, or in a lover’s arms, write about it.

John turned in a story that begins like this:

It’s seven o’clock. I’m at home, bored. My brother Damien is sitting
next to me changing the channel on the television. I’m tired of watching
Family Guy. I feel my stomach growl. I look inside the fridge, there’s
nothing in it. Each row is like an apartment on a three story, abandoned
building.

I thought, Whoa, “…like an apartment on a three story, abandoned building.” What 17 year old writes like this?

Not many that I’ve taught in my 17 years in the LAUSD. And I’ve taught some good ones at Crenshaw HS, Palisades HS, Venice HS, and at a summer UCLA high school extension program that attracted some of the most well-to-do students in the country.

After the home essay I began paying more attention to John and his writing.

After class one day I asked, “Hey John, what do you read?”

“I read the LA Times on Thursdays, the ones you bring in.”

“What do you read outside of school?”

He shook his head.

He didn’t read and he could write. Really write. And I wasn’t the only one who thought so.

For the past three years I’ve received a grant from PEN in the Classroom, an organization that promotes literacy in high schools. They pay a professional writer to come into a high school class, once a week for twelve weeks, to work on some aspect of writing. For my students, it’s personal essay.

The PiTC mentor is Amy Friedman, a syndicated columnist who’s written a children’s column called Tell Me a Story for the past 16 years.

Two weeks into the sessions with Amy, John started cranking out essays. I read them and passed them along to Amy, who also happens to be my wife.

“I think John’s a savant,” Amy said. “I’ve never known anyone to write like this. Especially a teenager.”

“I’ve taught, what maybe 4,000 high school students?” I said. “And if John’s not the most talented one, then he’s one of the two or three best.”

The culmination of the PiTC program is that the essays are published in an anthology.

Amy and I were proud of this collection titled, “Thinking Out Loud.” That was John’s title. So was the cover art of a solid looking, but lone teen, whose face is obscured by a baseball cap. He sits, staring straight down, his hands folded together locked in prayer position. And attached to this guy’s shoulder, angel wings.

Inside the collection are 30 essays. Twenty-six of our student writers each penned one essay that made it into the book. John wrote five. And his five are the best five.

The book came out in March. All our students received a copy. Most students acted like it was no big deal, to break into print for the first time, to be published writers.

Then the next day a bunch of them would sheepishly approach me after class and ask if they could buy another copy. For their mom or a relative back home.

About that time I told John that since the PiTC project had ended and Amy would not be teaching the class anymore, that I was going to be his personal writing coach. That in addition to the class work I assigned, I was going to give him extra projects. I wanted to make sure he kept honing his craft.

I asked him if he had ever read anything by Gary Soto. He had not. I sent John to the library to check out a collection of Soto’s short stories. I guaranteed that he’d like the stories. Every California writer should be familiar with Soto’s writing. I said.

He didn’t resist the additional work. Instead he seemed to thrive at the challenge.

But a few weeks after we began the coaching arrangement,an odd thing happened. Odd and uncharacteristic. John quit coming to class.

Early April and he was a no-show. For days and days.

Finally after class one day I asked Jorge, who was either John’s friend or cousin or both, if he knew what happened to John.

“Can I close the door?” Jorge asked.

He looked at the floor. Then at me. His chin quivered.

Again Jorge looked at his shoes. Stared at them for several moments, then took a deep breath.

Note: Be sure to read Danziger’s recent column “Shut Up and Strike” at the Huffington Post.