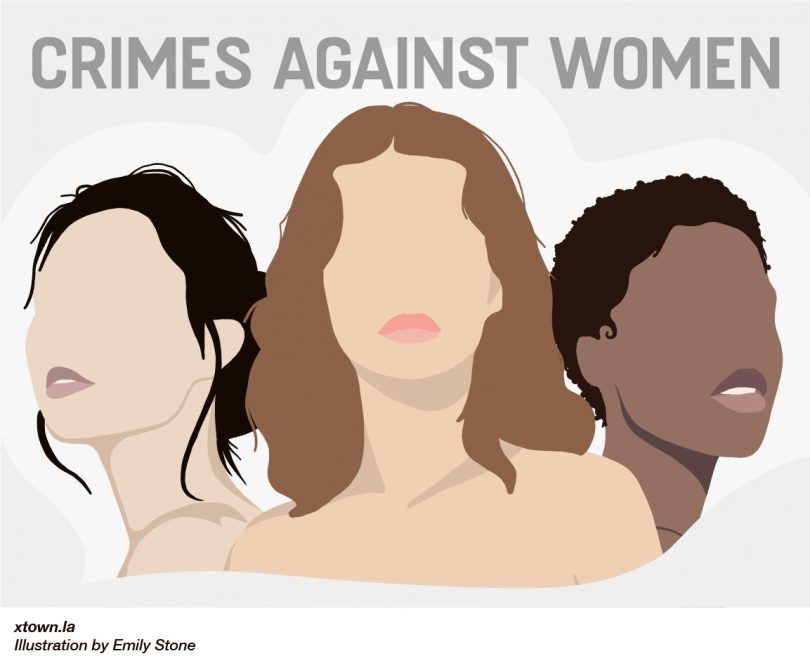 Editor’s Note: In the data-focused story below, Crosstown’s Ethan Ward looks at the prevalence of domestic violence against women in Los Angeles. Data from the LAPD reveals that intimate partner simple assault is the most common crime against women in LA.

And the LAPD’s numbers do not include the women who do not report abuse from their partners.

In a national survey of crime victims administered by the U.S. Department of Justice’s Bureau of Justice Statistics, 18 percent of women who said they had been victimized by their intimate partners also said they did not report the crime to police due to fear of retaliation from their attacker. In comparison, only three percent of women victimized by strangers said they did not report the crime against them for fear of retaliation.

Surveys of women in jails and prisons–who comprise the fastest-growing incarcerated population in the U.S.–offer an even more bleak picture of the impact of domestic violence on women, many of whom are assaulted before they are locked up, and subsequently face violence and re-traumatization within the criminal justice system.

The numbers are similar for women in local jails too, where most are stand accused of low-level, non-violent crimes, specifically property offenses (32 percent), drug offenses (29 percent), and public order offenses (21 percent).
According to the Vera Institute of Justice, 86 percent of women in jail report having experienced sexual violence.

These women in the criminal justice system are often overlooked, taken away from their children, left with untreated trauma and re-traumatized by incarceration, before being sent back out into their communities with financial instability and limited support.

The number one crime reported against female victims for the past four years the City of Los Angeles was intimate partner simple assault.

That’s when a current or former partner, co-parent or cohabitant physically attacks a victim without a weapon, and doesn’t cause serious injury, according to California law. 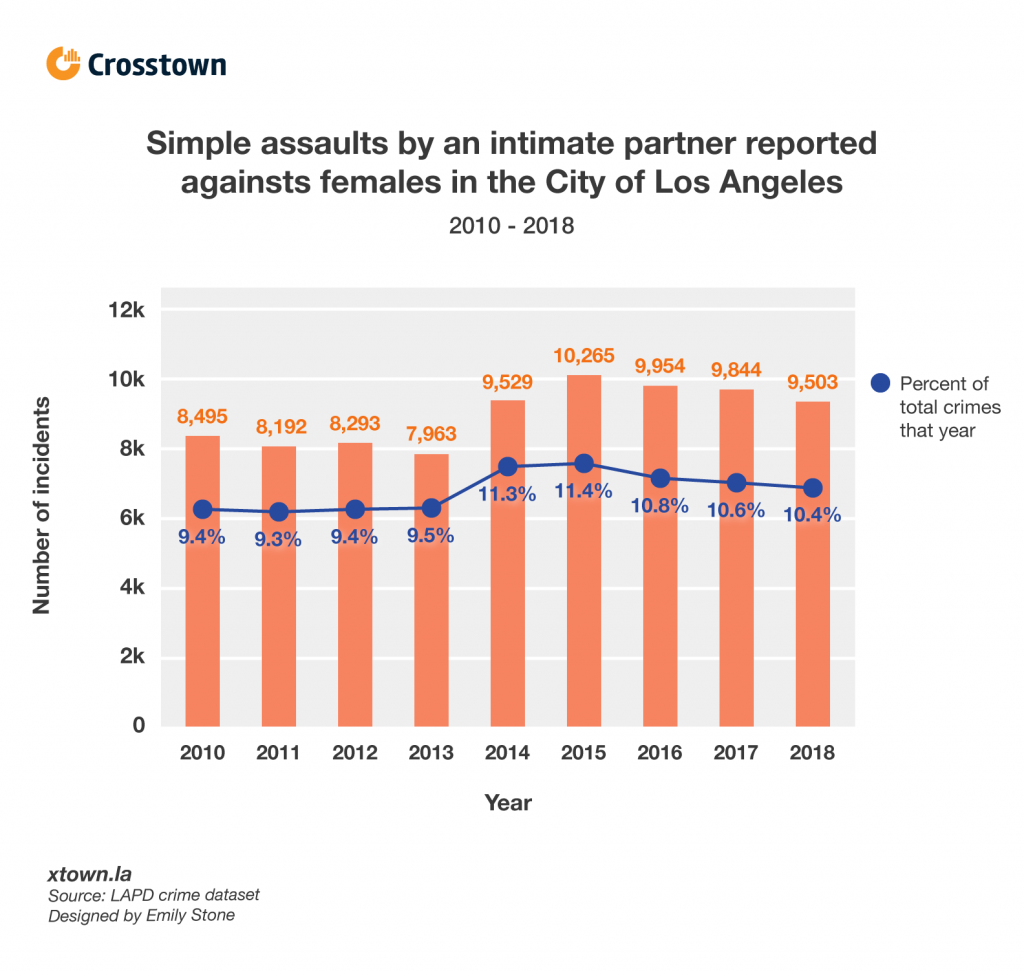 In 2018, the top crime against male victims was battery simple assault.

Intimate partner simple assault is just one offense in a broader category of crimes considered to be domestic violence, which could also include aggravated assault, stalking, rape and even murder.

Nationally, there are indications that violence against women is escalating. A recent study found that four women are killed each day in the U.S. by their intimate partners, up from about three a day in previous reports.

“There needs to be more discussions about the cultural and traditional practices that lead to intimate partner violence and the cycle of violence that many women go through,” said Denise Benitez, a Los Angeles-based licensed marriage and family therapist specializing in domestic violence.

Between 2010 and 2014, intimate partner simple assault was the second most reported crime against female victims in the City of Los Angeles, after battery simple assault.

For the past nine years, the top five crimes against female victims were battery simple assault, intimate partner simple assault, burglary from vehicles, petty theft (of $950 or less) and identity theft. 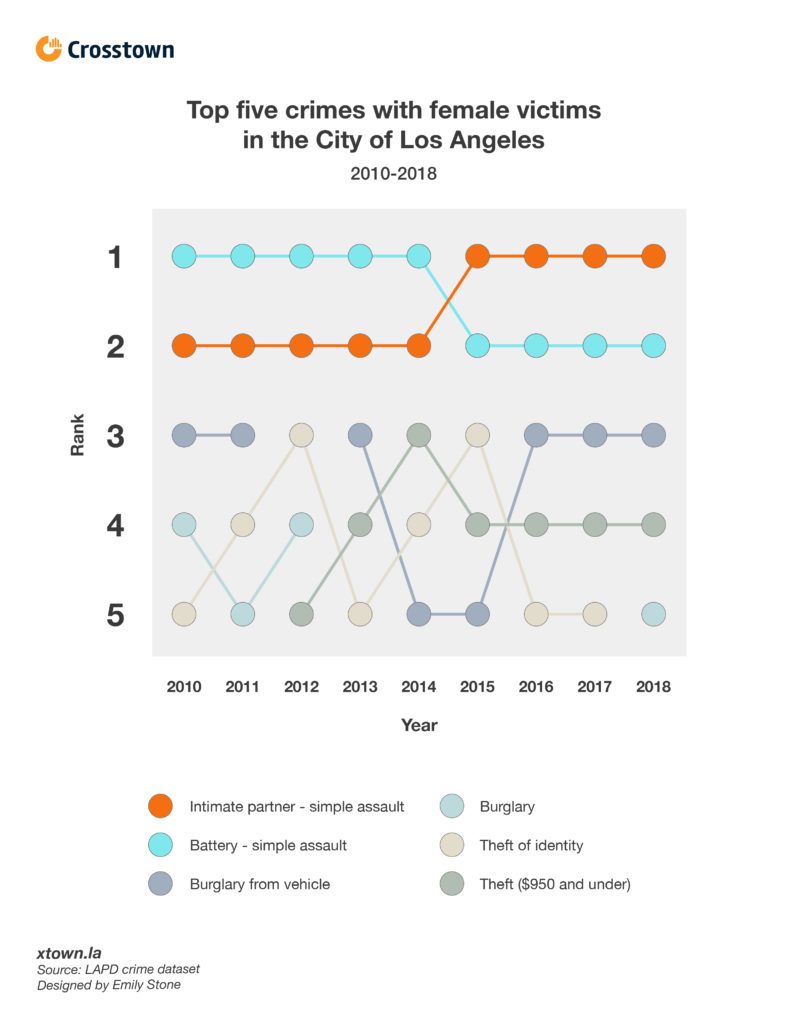 LAPD data only reflects crimes that are reported to the department, not how many crimes actually occurred. On occasion, the LAPD may update past crime reports with new information, or recategorize past reports. Those revised reports do not always automatically become part of the public database.