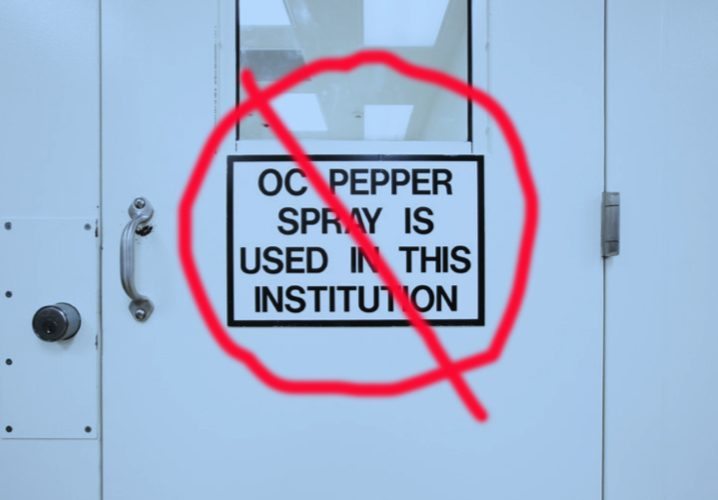 Aerosolized oleoresin capsicum or “OC spray,” commonly known as pepper spray, is so toxic that it is regulated under state law as a form of tear gas.

Yet, according to a new report released this week by the ACLU Foundation of Southern California, these tear gas weapons—a.k.a. pepper spray—have been used more than 5,000 times against children and youth as young as 12-years-old in juvenile facilities in 26 counties, and in state facilities overseen by the Division of Juvenile Justice (DJJ), between January 2015 and March 2018.

It is also used on kids with asthma, youth in the middle of a psychiatric crisis, girls who are pregnant, and kids with emotional disabilities who are engaging in activities that are artifacts of their conditions. 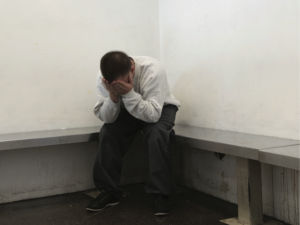 In some cases, it is used to control non-threatening and non-physical actions, even though it can cause, not only intense pain, but also blistering of the skin, respiratory arrest, and in more extreme cases an increased risk of strokes and heart attacks.

Its psychological and emotional impacts are uncertain, according to the report.

Los Angeles County used pepper spray the most during the three-year period measured, of all the state’s counties listed in the report—in part because of its size.  LA is followed by San Diego County and San Bernardino County.

(Thirteen counties did not provide data for the report, including Alameda, Sacramento, Fresno, and Riverside. Had they reported, presumably the figure of 5,000 uses of pepper spray would be far, far higher.)

Of course, now Los Angeles County hopes to phase-out pepper spray.   And a proposed a year-long phase-out plan designed to keep kids and staff safe in the process is on the table. Yet, an official plan and schedule for the phase-out have yet to arrive.

The report, authored by the ACLU’s Ian M. Kysel, is based on 15,857 pages of 10,465 documents produced in response to public records requests.

During their more than a year of research, the ACLU Foundation staff also conducted interviews with youth and experts regarding the use of chemical agents in California county and state youth facilities. Pieces of some of those interviews are peppered throughout the report, to provide a window into what the experience of being pepper sprayed is actually like for a kid.

One of those interviews was with a 14-year-old the authors refer to as J.C.

“Short and reed-thin,” they wrote, “J.C. was just 14 when she was arrested, her first experience in the juvenile justice system.

After the police came to her house, they eventually took her to the intake unit at her county’s juvenile hall, where she waited for hours before being placed in a unit. She described herself as feeling depressed and thinking, “I don’t belong here.”
The next morning at 6 a.m., probation officers opened doors to the shower. and J.C. was allowed a few minutes to wash.

She was combing her hair at one of the sinks with three other girls “when a fight broke out in the bathroom.” It seemed that one girl had used a racial slur, against another, and a fight ensued between several of the girls.

Eight probation officers arrived quickly. The first officer in the group, a male, was carrying a shield and an OC canister.  He immediately began spraying.

J.C. was simply trying to get away from the fighters and the spray, but reportedly got badly sprayed anyway.

“My reaction was that I couldn’t breathe,” she told the interviewer. “It got in my eyes and mouth and my whole face.”

J.C. said she fell knees right away, as she continued to struggle with her breathing.  “I felt it and inhaled – as if I were dying. I couldn’t see because my eyes were watery … and it was burning.”

In addition to the initial pain and breathing difficult J.C. experienced, it appears she was not allowed any decontamination at all for approximately 30 minutes, at which point, a nurse gave her cream to help with the burning. Sometime after that, she was permitted to shower,

Even after decontaminating, J.C. reported ongoing reactions for days.  She got a bad rash on her face. She was unable to eat the morning after the spraying because her throat was still burning intensely.

The worst was her difficulty with breathing, which continued for three days, she said. “I had to sleep sitting up because I couldn’t breathe right.”

Due to her ongoing breathing difficulties, eventually, the 14-year-old was taken to the hospital, according to the report, where a physician gave her medication, which eventually allowed her breathing to return to normal.

J.C.’s story is a reminder that, in April of this year, six Los Angeles County Probation officers were charged for using pepper spray against five different teenage girls who were confined at Los Padrinos Juvenile Hall in such an extreme manner that it constituted an unlawful assault.

(J.C.’s experience did not appear to be as extreme as the incidents underlying the criminal assault charges in LA County.)

In four of the six incidents pertaining to the criminal charges, some or all of the officers involved reportedly “prevented the victims from being decontaminated after they were sprayed,” wrote the DA’s office in its official statement.

There were no details in the DA’s statement about how the extreme spraying combined with the prevention of decontamination affected the victims involved in the incidents, or how long the physical symptoms lasted after the spraying.  Neither do we know whether any of the five girls—one of whom was sprayed to the point of assault on two different occasions—experience any continuing symptoms.

Is pepper spray worse for kids than adults?

The ACLU authors noted that, despite all we know about ongoing brain and physical development among adolescents and young adults, there is no concrete research that looks at the long term physical and emotional effects of OC spray on kids—nevermind that many psychotropic medications and other similar substances are known to affect juveniles much differently than they affect adults, such as the manner in which some antidepressants can send adolescents into suicidality.

Yet they did find that a recent systematic review of medical literature documenting the health impact of various chemical irritants, including OC spray, as crowd control weapons suggested that “children are more vulnerable to severe injuries from chemical toxicity,” related to the use of chemical irritants like OC spray.

With this in mind, the discovery that pepper spray was being used disproportionately against youth with disabilities, was a particular cause for concern.

For instance, in 2018, Disability Rights California and Disability Rights Advocates found a disproportionate use of OC spray against youth with mental health and behavioral disabilities detained in the Kern County juvenile justice system. This included findings that OC spray “disproportionately impacts youth with mental illness and risk of self-injury.”

In the same 2018 report, disability rights advocates found that “youth with [attention-deficit/hyperactivity disorder] and bipolar disorder appear to have been pepper sprayed for behavior related to their disabilities, over which they have little control.”

The disproportionality problem, not surprisingly, also extends prominently into the racial arena, according to the ACLU report.

For instance, in Merced County, the researchers found that, between January 2015 and March 2018, 343 out of 361 incidents of use of force involving pepper spray “were against youth not classified by the county as white.”

In Orange County, which provided ethnicity data for only 46 use of force incidents involving pepper spray, 43 of 46 incidents “were against youth not classified by the county as white or Caucasian.”

The use of pepper spray for non-violent, non-physical actions

In addition, researchers discovered that even when a county’s use of force policy prohibits the use of pepper spray against youth for behavior that is “not viewed as posing an imminent risk of harm,” these tear gas weapons are often still used.

In other counties, officials did not prohibit the use of pepper spray for situations that posed no threat to staff or kids.

For instance, in Contra Costa County, staff members justified blasting a kid with OC spray when he or she “refused to follow staff direction, became defiant,” or “refused to go to room…”

In LA County, a juvenile defense attorney gave this report to ACLU researchers:

“P. is 14 years old. He is in special ed and he has mental health issues and significant emotional needs. He also has juvenile diabetes and a condition called hypothalamic hamartoma, a benign brain tumor that may cause seizures and impact P’s ability to think clearly. P was also on anti-psychotic medication while he was in the [juvenile] hall as well as medication for seizures.

“In other words, he had many of the red flags that make the use of pepper spray not only contraindicated but very dangerous. He was sprayed in custody, not once, not twice, but four times.”

By the way, you can see what documents the ACLU received from various California counties here.)

Not surprisingly, the report concludes that pepper spray should be banned for use on kids in California, full stop.

“The widespread use of tear gas weapons in California’s juvenile justice system runs counter to the rules for juvenile detention in the large majority of U.S. states and best practices for caring for youth in detention as well as fundamental human rights, constitutional and state law standards,” the authors wrote.

The report points to research by California’s legislative counsel presented in 2018 to the State Assembly Committee on Public Safety, which found that at least 35 U.S. states do not permit the use of OC spray in juvenile detention facilities and, of those that do, only California, Illinois, Indiana, Minnesota, South Carolina and Texas allow facility staff to carry canisters of such tear gas weapons on their persons.

Interestingly, those juvenile detention systems across the U.S. that still employ OC spray “have repeatedly faced complaints or lawsuits for mistreating youth by subjecting them to excessive force through the use of the substance,” the report found.

It is also interesting to note that California state law requires that “juvenile hall[s] … shall not be deemed to be, nor treated as, a penal institution … [but] shall be a safe and supportive homelike environment.”

“Banning the use of the spray in juvenile facilities is not a new idea,” the report states.  Along with the 35 states mentioned above,  seven of California’s counties have already done it.

“The Los Angeles County Probation Department — which oversees one of the largest juvenile justice agencies in the world — is likely to join them soon,” the authors note.

LA County has a proposed plan to gradually and safely phase-out pepper spray over a 12-month period in the county’s increasingly trouble-plagued juvenile halls and camps—a plan that was designed with input from both youth advocates and probation staff.  What is missing is an official plan and schedule that lets us know when the phase-out will begin.