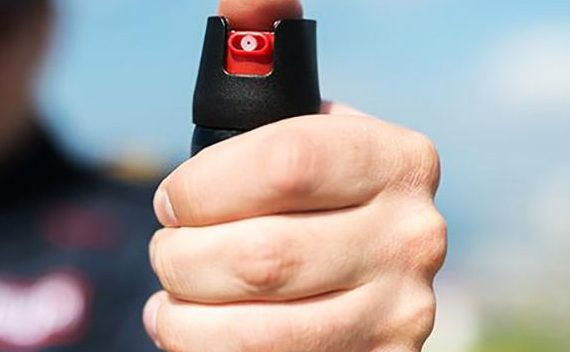 On Tuesday, June 25, at around 11:30 a.m., Chief Terri McDonald, the head of the nation’s largest probation department, with 6,500 staff and an $820 million dollar budget, presented her plan for phasing out the use of aerosolized Oleoresin Capsicum, commonly called OC-spray or pepper spray, in the Los Angeles County’s youth facilities.

Most specifically the phase-out applies to the county’s juvenile halls, along with a single probation camp that still uses the excruciatingly painful skin-and-eye-burning substance.

A month ago, McDonald sent a 14-page version of the plan to each of the members of the LA County Board of Supervisors. Since then, she and the other probation higher-ups on the juvenile side of the department, have been working to finalize their “comprehensive” report for the board, which McDonald officially presented at Tuesday’s board meeting.

In short, the report detailed the steps Chief McDonald intends for the department to take in order to have OC spray gone from the county’s youth facilities by the end of 2020.  It also has a hefty price tag attached to taking those steps with a bottom line of nearly $40 million, plus additional funds requested by the county’s department of mental health.  The combination of the two requests had some supervisors all but gasping.

Setting the goal post for complete phase-out at the end of 2020 means that it’s a year later than the board stipulated when it passed its February 19, 2019, motion to get rid of the stuff.  That motion, co-authored by Supervisors Mark Ridley-Thomas and Sheila Kuehl, asked for a plan to phase it out by the end of 2019. Yet, whatever the goal turns out to be, it is clear that the end of 2019 no longer realistic since we are now nearing the end of June, which is a far later date than many had hoped for.

The news that OC-spray—or pepper spray—was being used abusively by certain staff in the county’s youth facilities, first came to public attention on February 5, of this year when the Office of the Inspector General (OIG) delivered a 28-page report to the LA County Board Supervisors, which painted a distressing picture of the use of the spray on the youth who are housed in LA County’s three juvenile halls and, at that time, two of its youth probation camps.

The OIG’s report led to the unanimous vote by the board to phase out the use of pepper spray on the county’s kids altogether.

Since that vote, the decision was emphasized in early April of this year when six juvenile detention officers were criminally charged with the unlawful use of OC spray against five different teenage girls in the county’s care.

Then this month a federal civil rights lawsuit was filed against the county alleging that several detention officers At LA County’s Central Juvenile Hall repeatedly and unnecessarily—pepper spraying A 15-year-old girl without ever allowing her to properly “decontaminate.”

And yet, getting to phase out safely, with everyone involved agreeing to the terms of the phase-out, seems to be anything but simple.

To help breach the gap, back in February the board passed a second motion-—this one sponsored by Supervisors Ridley-Thomas and Janice Hahn—which instructed the ad hoc oversight body known as the Probation Reform and Implementation Team—-or PRIT—- to do their own research on the pepper spray problem, and come up with a set of recommendations.

The resulting 19-page report, delivered early in May, was intended to be an advisory document for the department’s own official plan, although Supervisor Ridley-Thomas suggested that the chief’s report could have and should have used the PRIT report more and better.

Even though it calls for an 18-month, four-step phase-out, as opposed to the PRIT’s recommended 12-month dial back, the chief’s plan is, in certain ways,  ambitious.

Prior to the 4-step phase-out of the use of OC spray, there is a crucial pre-phase-out plan that hopes to produce what amounts to a cultural change in the department’s youth facilities.  This pre-phase-out period will necessitate, among other things, rigorous staff training in the art of  “de-escalation, trauma-informed treatment, youth engagement, and physical intervention,” according to the proposal.

The rest of the pre-phase-out plan includes:

• Collaboration with and by DMH to expand/develop youth-centered programming and enhance our de-escalation and communication efforts towards youth in crisis and an Increase in clinical personnel in housing units;

• Implementation of the so-called LA Model in the juvenile halls that will require program enhancements in areas including arts, job readiness training, gang interdiction, conflict resolution, parenting and sports, Cognitive Behavioral Therapy and the implementation of Multidisciplinary Teams;

• An enhanced staffing model supported by the principles of the LA Model with an ideal supervision ratio of 1:5 during normal waking hours instead of the current 1:8 ratio;

• Introduction of the Deputy Probation Officer III classification in juvenile halls to allow subject matter experts to perform the function of master trainers in a variety of institutional practices;

• Improved Behavioral Management Program that supports the needs of both short-term and long-term populations; and

• Issuance of new radios to assist staff with summoning assistance when necessary.

As mentioned above, all of the above will not be cheap to accomplish, hence the chief’s request to the board for a meaningful amount of additional funding  (more on this in our upcoming story).

Yet, in general, the changes are what is called for before the report’s four-stage drawdown of the use of pepper spray can begin.

Those four steps that would comprise phase-out are as follows:

Phase 1 – Voluntary Stage:  After being trained, staff will have the option to not carry OC spray in their assigned housing unit. This step may last 30-60 days, depending on the historical frequency of use of OC in the particular housing unit and staff and youth comfort with progressing to the next stage of the phase-out.

Phase 2 – Restricted Stage:  After the 30-60 day Voluntary Stage, OC spray will be restricted to two (2) staff per shift in each housing unit. The selection of those two staff is still under consideration and requires further discussion with our labor partners. This step may last 60-90 days

Phase 3 – Secured Stage:   In this stage,  two OC spray canisters will be secured in a locked box in the unit and only accessible during extreme emergencies.

Phase 4 – Elimination:  In this final stage,  each unit and area “will be independently assessed based on analysis as to when OC will be eliminated from specific units. ” The last staff to carry or be able to access OC spray generally “will be crisis response personnel.”

Yet, there is far more to this important presentation—-most particularly the board’s reaction.