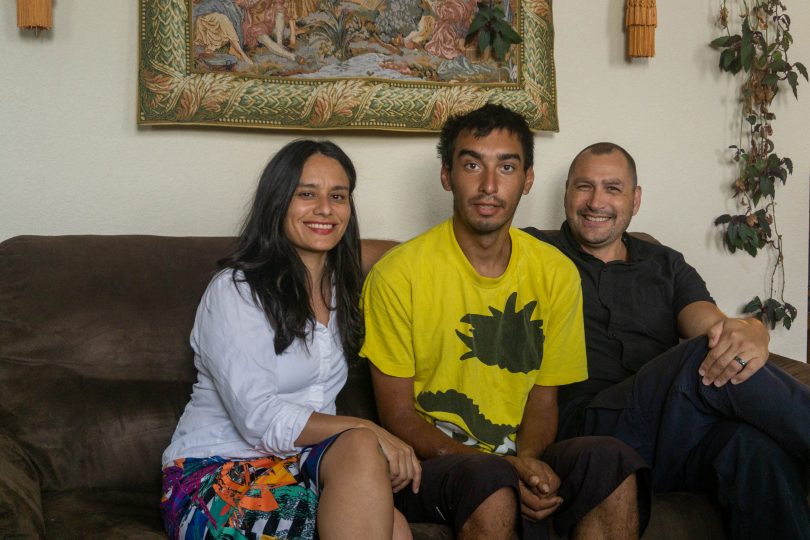 The program, which dispatches two-person teams made up of a medic and a mental health professional, differs from LA’s mental health crisis teams, which, for both the LA County Sheriff’s Department and the LAPD, are each comprised of a mental health clinician and a law enforcement officer.

However, the CAHOOTS program — and its elimination of law enforcement from the equation, freeing up police to handle more dangerous matters — is considered a program worthy of replication across the U.S.

In June, LA County’s Alternatives to Incarceration Workgroup presented its June report” rel=”noopener” target=”_blank”>more than 100 recommendations for prioritizing diversion and mental health care over incarceration in the adult justice system.

Within that report, one of the workgroup’s recommended goals was to reduce contact between law enforcement and people with mental health and substance use disorders, and thus reducing avoidable arrests and unnecessary criminalization. The workgroup pointed to CAHOOTS as a possible model, although it noted that implementing such a strategy in Los Angeles would require a reworking of the 911 system to connect 911 operators with the Department of Mental Health.

Every day that Janet van der Laak drives between car dealerships in her sales job, she keeps size 12 shoes, some clothes and a packed lunch — a PB&J sandwich, fruit and a granola bar — beside her, in case she sees her 27-year-old son on the streets.

“’Jito, come home,” she always tells him, using a Spanish endearment. There he can have a bed and food, but her son, Matt Vinnola, rarely returns home. If he does, it is temporary. The streets are easier for him. Home can be too peaceful.

But the same streets that give Vinnola comfort are also unsafe for a man battling dual demons of drug use and chronic paranoid schizophrenia.

Police and criminal courts often intervene before Vinnola gets treatment or care. Since his first diagnosis of severe mental illness in 2014, Vinnola has collected a litany of charges from misdemeanors to felony trespassing and drug offenses. Over the past four years, Vinnola has been charged in four separate Colorado courts and arrested multiple times almost every month either for new offenses or on warrants for failing to appear in court.

But soon, he might encounter mental health professionals on the street instead of cops. Denver is one of at least eight cities considering an Oregon program called Crisis Assistance Helping Out On The Streets to decriminalize and improve the treatment of people with severe mental illness — while saving the city money. The 30-year-old CAHOOTS program diverts nonviolent, often mental health-related 911 calls to a medic and a mental health professional instead of law enforcement.

Denver police and community service providers visited Eugene, Ore., in May to shadow CAHOOTS teams. Denver police officials said they are considering the model as an option to push beyond their existing co-responder program that sends mental health professionals on about six 911 calls a day.

Over 8 million people struggle with schizophrenia or bipolar disorder in America, and an estimated 40% of people diagnosed with schizophrenia go untreated, according to the Treatment Advocacy Center, a nonprofit focused on mental health. Individuals with those illnesses often lose the ability to realize their deficits, creating a roadblock in accessing care and attending medical or court appointments.

Low-level offenses can land those with paranoia, hallucinations or a reduced ability to communicate, like Vinnola, in the criminal justice system. An estimated 383,000 people with severe mental illness are behind bars nationwide, according to the Treatment Advocacy Center, while only a tenth of that number are in state hospitals.

The Push to Rethink Safety

Since the 2018 publication of a Wall Street Journal article about CAHOOTS, calls have poured into its organizers from officials in Los Angeles; Oakland, Calif.; New York; Vancouver, Wash.; and Portland, Ore., among others.

The Eugene CAHOOTS team shows up in work boots, jeans and T-shirts — and without police officers — in response to 911 calls diverted to the program.

“That difference in uniforms can assist folks with letting their guard down and being open to accepting the help that is being offered,” said Tim Black, the Eugene CAHOOTS’ operations coordinator.

For people with a history of volatile arrests often while in mental health crisis, this could make treatment more accessible, less traumatic and safer. One in 4 deaths from police shootings represent people with mental illness, according to the Treatment Advocacy Center.

Van der Laak said she thinks her son would be more willing to accept treatment if police were not part of the intervention in his mental health crises. She worries that his delayed responses to commands and difficulty answering cops will be perceived as defiance and escalate into an arrest — or worse.

Giving Voice to Her Son

After van der Laak’s son was diagnosed with paranoid schizophrenia in 2014, her everyday gaze shifted from the city skyscrapers and Colorado blue sky to the people living on Denver’s streets. It’s hard for her to pretend they don’t exist. That would mean her son doesn’t exist.

She doesn’t understand how people do it — walk by her son as if he’s just a tree, or nothing, even when his bare feet are bloody, his clothes torn and his face visibly dehydrated, all visible signs of Vinnola fighting his internal battle with schizophrenia.

“His brain just doesn’t work like yours and mine,” she said. 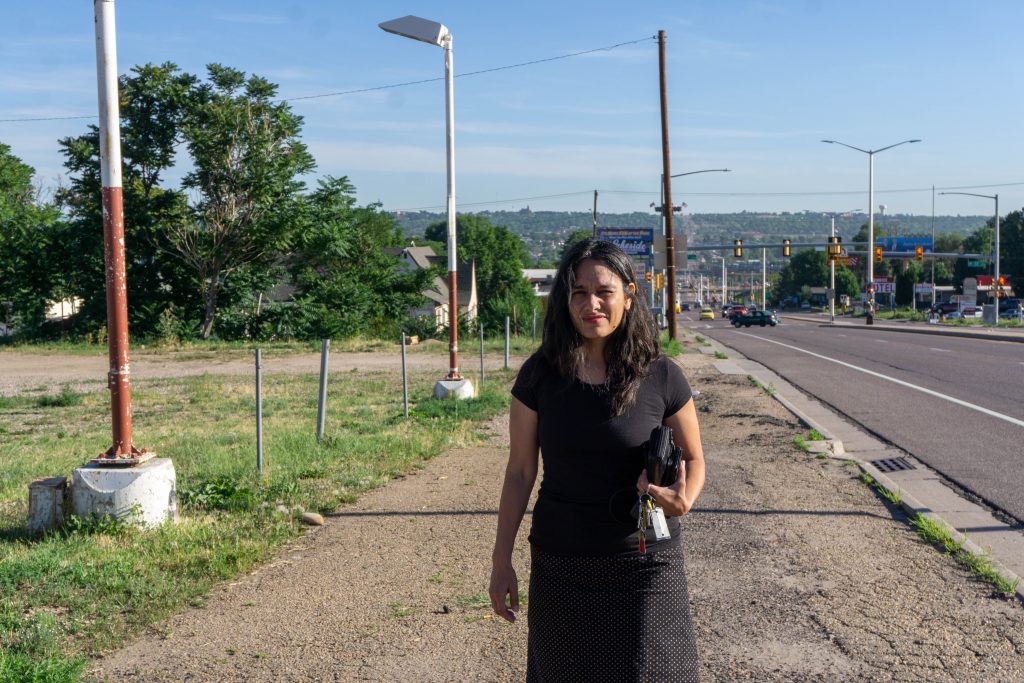 Janet van der Laak walks on Federal Boulevard in Denver looking for her son, Matt Vinnola, on July 19, 2019. Van der Laak tries to make contact with business owners and employees along this stretch of road, giving them her phone number to call instead of the police if they see her son. (LJ Dawson for KHN)

Vinnola’s mother said her son is not a danger to anyone other than himself, but many people associate mental illness with violence. People with severe mental illness are more than 10 times more likely to be victims of a violent crime than the general population, according to the U.S. Department of Health and Human Services.

Vinnola agreed to be interviewed for this article but was unable to answer questions for more than a few minutes. His answers were fragmented and short. He struggled to understand the questions. Van der Laak said he answers the same way in the courtroom.

Van der Laak is outspoken for her son, calling herself his advocate and voice. She attends his court dates, toting legal and medical paperwork in a thick manila folder. He might not attend, but she won’t miss a chance to speak up against a justice system she sees as incapable of being responsible for her son’s treatment.

“It’s critical that I’m there. Because if I am not, they will railroad him and he will end up in jail for long periods of time,” she said. “And that’s not where he needs to be.”

Dr. Sasha Rai, director of behavioral health at the Denver County Jail, said a person in a mental health crisis needs to be in a more therapeutic place for treatment than jail. To him, the biggest obstacles to care for the people he treats in jail are a lack of stable housing and the stigma of mental illness.

“If you were sick with cancer, they’re not going to stick you in jail for 84 days until they find a place to get you care,” van der Laak added, referring to when her son spent over two months in jail in 2017, awaiting one of the 455 beds in the state’s mental health hospital after being arrested for violating probation.

The Eugene Police Department uses its CAHOOTS staff for more than mental health calls. They deliver death notices across the city, hand out water bottles and socks to people living on the streets, and take after-hours community medical referrals. The staff offers those services to the city for half the cost of a police officer.

“Our police officers try the best they can, but they are not mental health professionals,” said Eugene Police Lt. Ron Tinseth.

In 2017, Eugene diverted 17% of an estimated 130,000 calls to its CAHOOTS teams. This freed up Eugene police officers to respond to higher-level emergencies.

Like many police departments, Denver is feeling the pressure of mental health issues. From July 2018 to July 2019, the department said, it received 15,915 mental health-related calls, almost a 9% increase from its annual average over three years.

To enact a program like CAHOOTS, the Denver Police Department would have to iron out details such as insurance to cover responders and partnerships with local nonprofits that offer services like sobering-up shelters, medical care and substance-abuse counseling.

Lisa Raville, executive director of Denver’s Harm Reduction Action Center, a Denver nonprofit focused on helping those who use drugs, asserts that the power of a CAHOOTS program lies in its community relationships and the ability of first responders to simply ask, “How can I support you today?”

“And then you can do it. Maybe it can be possible. Maybe this person can find some sort of safety,” she said. “We all deserve that.”

Until then, when van der Laak’s son is on the streets, she uses Facebook and her neighbors to keep track of him. She gives store clerks near the streets he chooses to live on her phone number in the hope they will call her to pick up her son during a crisis, not 911.