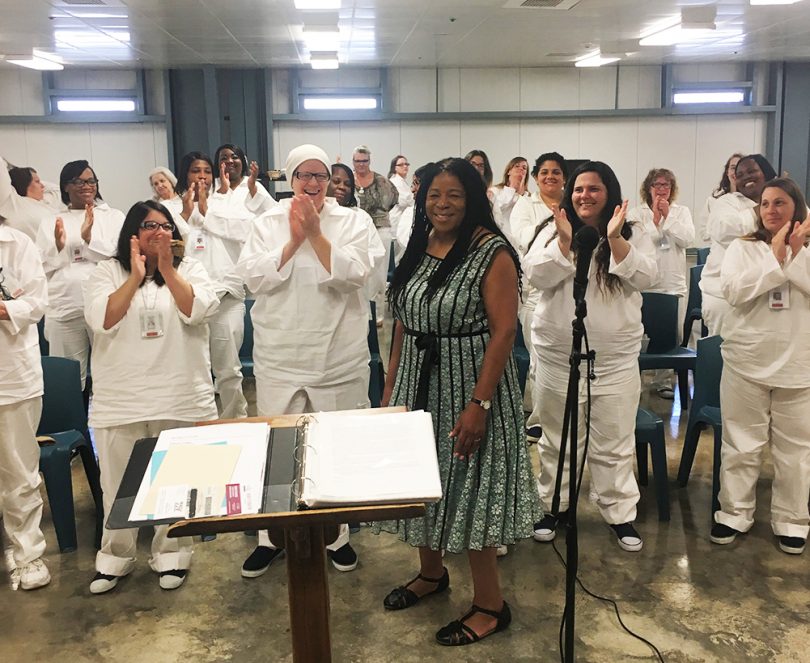 She is also the founder of A New Way of Life Re-Entry Project, a program that has, to date, helped more than a 1000 women escape poverty and trauma and get on their feet when they return from prison.

In addition, Burton is the author of the stunning memoir, Becoming Ms. Burton: From Prison to Recovery to Leading the Fight for Incarcerated Women

For the past year, along with her other activities, Burton has been on a cross-country book tour, taking “Becoming Ms. Burton” into jails and prisons all around the nation, then writing about the visits when she gets the chance, such as in the essay below.

Along with her memoir, Burton brings to the facilities her own painful past experience, which allows her to connect deeply with the men and women she meets at each stop. Burton was four years old when her aunt’s boyfriend began to abuse her sexually. At 14, she was gang raped on her way home from a Christmas party with a friend. She told no one  about the attack until her pregnancy began to show, and she had no choice but to come clean, at least to her mother.

Her first child was a girl. Her second child was a little boy who, at five, ran into the street before his mother could catch him and was run over and killed by an off duty Los Angeles police officer. No one in the department bothered to apologize, she said.

Wild with grief, Burton spun into a crippling depression that led to drug use, prostitution, and multiple trips to prison, mainly for drug offenses. Eventually, Burton managed to break free of the revolving prison door and, once she got herself stabilized, began helping other women do the same, mainly by giving them a place to live, and the knowledge that their lives mattered, at least to someone.

In the story below, Burton describes her most recent trip to two women’s prisons, the small  but seemingly constant indignities each visited on its female inmates, and the effects those indignities had on her still.

Some of her visits, Burton describes as more encouraging. For example, on her trip to what is known as the Wrightsville Unit,  a male prison located in Wrightsville, Arkansas, she wrote about the surprise she felt when she learned how much her story “resonated’ with many of the men who had come to listen to her.

“…One of the men at Wrightsville blew me away,” she wrote. “During my discussion, this man stood up and said that after reading my book he felt like he needed to apologize to me for the rape I experienced many years ago. He told me that 23 years ago, he raped a woman and had been in prison for it ever since.’

No one had ever before apologized to her for that assault or the damage it had done.

“I felt like some type of amends were coming to me through this stranger I’d never met,” she wrote. “It was courageous of him to stand up and be vulnerable in front of 40 other men. To me, he demonstrated that he has taken responsibility for what he did. I accepted his apology and told him that I was really sorry that he had to be in prison for 23 years. It does not take 23 years to correct your actions.”

Okay, here’s Susan Burton. And if you haven’t yet read her book, please do yourself a favor and don’t miss it.

I visited the Federal Correctional Institution in Aliceville, Alabama, in July. Miss Alice Johnson had recently been released from there after Donald Trump commuted her sentence, and the women there seemed really really hopeful. But for me, I’m just now able to talk about the trip because it was an extremely hard trip for me. Walking into the prison and seeing the women stripped of their identities, stripped of their individuality, stripped of their humanity hit me much harder than it usually does. Even though the women were trying to have hope, I recognized those symptoms of dehumanization as I peered from my podium at them. It wasn’t that it was different from any other prison, but some days you have so much more clarity, and that day, it was really apparent to me.

On the way to the prison, I’d driven through woods that seemed like the woods that people were lynched in. It felt eerie and heavy. There was a long, obscure drive to get to Aliceville, and I thought about how hard it must be for family and friends to go and visit the women. All of these things rambled through my brain as I drove.

I left Aliceville feeling really burdened with what I saw, with my soul speaking to me. The next day, after visiting that prison, I went to visit Bryan Stevenson’s Legacy Museum and the National Memorial for Peace and Justice, which remembers the victims of lynching. I could see the parallels between 21st century killings of Black people and what had happened historically in this country. I was just solemn.

Then the next day, I went to Tutwiler Prison for Women in Wetumpka, Alabama to visit Geneva Cooley, a woman I met during a visit there about a year ago. She was handed a 999-year sentence for drug possession. The reality is that she’ll die in prison for drugs if something isn’t done to get her released.

My visit was scheduled for 11:00 am, and I got there at 10:15. I was told I couldn’t see Geneva because I had on a sleeveless dress, so I went out to my car and put on my pajama top. Even though I got there 45 minutes early, I didn’t get in to see Geneva until almost a quarter to noon. I grew more and more concerned as I waited, but I was too scared to ask what was taking so long because I knew they had the power not to let me in. So I just sat it out. The entire process spoke to the powerlessness people have when they’re in prison and that even their visitors have.

When I was finally admitted to see her, Geneva and I went into a room where the paint was peeling and faded, and the desk was all wobbly and broke. Before I arrived, Geneva had asked me to bring a big bag of quarters so she could go to the vending machine. She talked about not having had a visit in seven years and how excited she was to get to some free-world food, even if it was from a vending machine. But the vending machine had not been stocked. I just felt so bad for her. It was so hard.

So today is the first day I was actually able to talk about that visit. The visits get harder because I see the inhumane way that women are held and treated. And I know that we have not moved far from Jim Crow. I know that we have not made the progress that this world thinks we have made. We just don’t want to think or talk about what’s happening to people. And nothing will change until we do.

You can read some of Burton’s past essays right here.