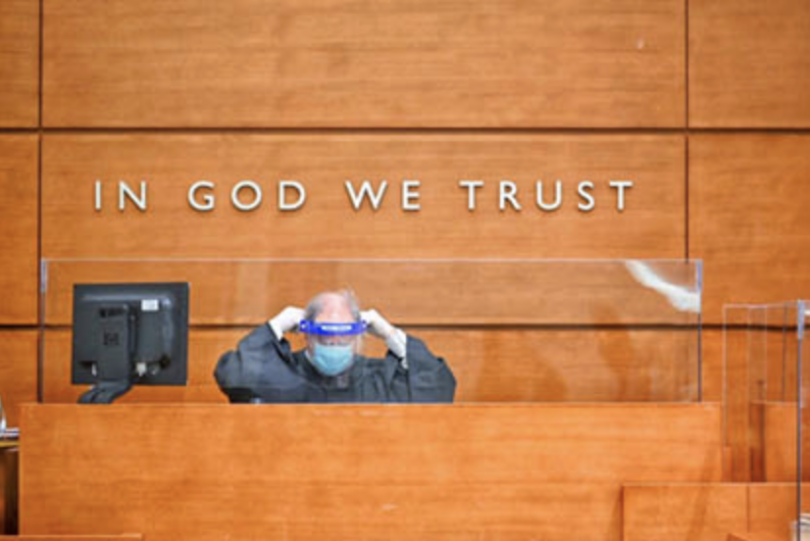 With the latest wave of COVID-19 sweeping through the country, many courts once again are suspending jury trials—leaving many defendants to languish in jail and civil plaintiffs waiting for relief.

“You can go to a grocery store or a hair salon or not,” said Paula Hannaford-Agor, director of the Center for Jury Studies at the National Center for State Courts. “If you get summoned for jury service, it’s not your choice. The courts are taking that really, really seriously. They have a special obligation not to endanger public health and safety.”

But those decisions have major consequences.

Court administrators expect an enormous backlog of cases in 2021 and perhaps beyond. Defendants are left locked up for longer periods in jail, waiting for their cases to get heard. And plaintiffs who have filed civil lawsuits claiming they’ve been harmed by a person or company can’t get them resolved any time soon.

Nearly every state suspended in-person jury trials in the early months of the pandemic, starting in March.

But by late summer and early fall, most courts had resumed in-person jury trials on a limited basis, Hannaford-Agor said. Many required masks and temperature checks; some installed plexiglass barriers and reconfigured courtrooms and jury assembly rooms to allow for social distancing.

As COVID-19 cases have spiked, courts have pulled back. While some have held virtual jury trials, most haven’t, as there has been a lot of pushback from attorneys concerned that viewing evidence and testimony remotely might affect a trial’s fairness.

At least eight states have suspended in-person jury trials until January, February or March, according to the Center for Jury Studies. At least seven other states, including Maryland and Wyoming, as well as the District of Columbia, have halted them until further notice.

Last week, following the advice of medical experts, Utah postponed a pilot program that would have moved ahead with some jury trials that had been on hold.

Most states haven’t issued statewide orders and are leaving it up to courts at the local level to make that decision. In some states, counties must give state Supreme Courts detailed information about how they would provide a safe environment before they can get approval. Many counties have chosen not to resume jury trials.

“A lot of them may not have figured out a way to do it safely because of space or because of local outbreaks or because they don’t have the funding to afford all the hand sanitizer and PPEs,” Hannaford-Agor said.

But some counties, such as Guilford County, North Carolina, have been holding in-person jury trials. Orange County, California, has held 131 since May, according to court spokesperson Kostas Kalaitzidis. Last year, it held 448 during the same period.

Jury service during the pandemic is fraught with challenges, Hannaford-Agor said. For a typical felony case, selecting a jury means bringing in a pool of 35 to 200 potential jurors. That can complicate social distancing logistics.

“Even ones that have figured out how to do it and are actually doing it with the second wave coming on are moving at a snail’s pace compared to what they used to do,” she said.

Cases are stacking up everywhere because of the pandemic, court officials say.

In Texas, pre-COVID-19, there were 186 trials a week on average, said David Slayton, administrative director of the courts. From March through the end of September, there were a total of 50.

“We’re going to continue to build a backlog because we don’t have the capacity to be able to fit enough people and try cases,” Slayton said.

Even if Texas courts get back to normal by April, they will have a backlog of around 10,000 cases that would have been tried by a jury, Slayton said.

“The bottom line,” he said, “is that it’s going to take a long time to dig out from that. I think it will be years before we are able to.”

In New Jersey, the backlog for criminal cases in which defendants haven’t been indicted rose 208% between October 2019 and October 2020.

“You can’t just shut down criminal for almost nine months and not expect that to have implications,” said Judge Glenn Grant, acting administrative director of the New Jersey Courts.

And actual jury trials themselves aren’t necessarily the biggest problem. Fewer than 1% of civil cases and between 1% and 1.5% of criminal cases ever get to a jury trial, according to Hannaford-Agor.

But having a specific jury trial date scheduled makes a huge difference in moving cases along and getting parties talking, attorneys and court officials say. That often results in plea agreements and dismissals in criminal cases, and settlements in civil ones.

“Most people don’t like to make tough decisions unless they’re up against a deadline,” said Chris Adams, president of the National Association of Criminal Defense Lawyers. “That’s true for many defense attorneys and prosecutors. You can’t get the doggone thing dismissed until there’s a trial deadline.”

States and counties have been using a patchwork of methods to try to keep the jury system going.

In Texas, courts held 48 in-person and two virtual jury trials from June through September, as part of a pilot program to determine how—and whether—they could be done safely, Slayton said.

Officials discovered they had to make a number of changes to allow for social distancing and the protection of everyone in the courtroom.

Some counties in Texas, including Travis County, have" frameborder="0" allowfullscreen> conducted the whole process remotely. Court staffers have provided potential jurors with technology, home-delivering iPads connected to Zoom and picking them up.

Since October, the Texas Supreme Court has prohibited in-person jury trials unless local court officials and a regional administrative judge approve a plan showing how they can be conducted safely.

As of now, 85 counties have submitted plans to conduct such trials, Slayton said. Several have held them, although a growing number won’t be moving ahead until next year, given the current state of the pandemic.

In New Jersey, officials decided to try a hybrid model in September, after the state Supreme Court allowed jury trials to resume after six months if social distancing was followed, said Grant. Twelve hybrid trials were completed. Four others were resolved during the trial prior to the verdict.

Jurors were selected remotely, but came to the courthouse for the final phase of jury selection and the trial. Staffers provided them with tablets so they could participate in Zoom sessions, as well as training and guidance.

State court officials also worked with counties to make sure courthouses had social distancing signage, temperature checks and room for jurors in the gallery, which allows more space, and other safety restrictions, Grant said. Staffers used tape measures in courtrooms to ensure 6 feet of separation.

“This whole thing has been an extraordinarily complicated process,” he said.

Picking juries and holding trials remotely is raising red flags for many attorneys.

“If you have people on Zoom [for jury selection], you are not going to be able to read body language or see reactions to the questions. It’s a level removed,” said Adams, of the criminal defense lawyers’ group.

“In the courtroom, you can see if jurors are paying attention and whether they’re making eye contact with somebody in the audience,” said Parr, who is also the commonwealth’s attorney for the city of Chesapeake. “When you’re a trial lawyer you watch everything in the courtroom. That’s an important aspect that’s lost if you’re doing it remotely.”

‘A Lot of People Sitting in Jail’

The suspension of jury trials is taking a toll on criminal defendants, defense attorneys say.

Because of the pandemic, most states have issued orders suspending speedy trial laws that require that defendants in custody be brought to trial within a certain time.

“There are a lot of people sitting in jail, a lot of nonviolent felonies, drug cases,” said Adams, who is also a private criminal defense attorney in Charleston, South Carolina. “The real pressure is on people who can’t bond out. They’re stuck in jail, and jails are about the worst place you can be during this pandemic.”

Ernie Lewis, executive director of the National Association for Public Defense, which includes public defenders and investigators, said his group would like to see judges release on bond more people being held in detention awaiting trial. Most can be released with little impact on public safety, he added.

Lewis and many other defense attorneys oppose the idea of virtual trials unless the defendant consents. They say clients have a constitutional right to confront their accusers and have a public trial.

“While some courts have strived to include the public, that’s really not possible like it is in a regular trial,” Lewis said. “The loved ones can’t be there, the victim can’t be there. [In remote trials] everybody is sort of equal, in Brady Bunch squares. The judge is in one, the prosecutor is in one. It changes the power dynamics.”

“They want their cases heard. They want closure,” she said. “It’s very frustrating for our victims, or if it’s a homicide, for the victim’s family.”

Civil cases also are in limbo in many areas. That means lawsuits involving car accidents, medical malpractice, product liability and defective devices are “sitting on the sidelines, for the most part,” said Tobi Millrood, president of the American Association for Justice, a national trial lawyers’ group.

“For plaintiffs, it’s frustration with a capital ‘F’. Not just because of the delay,” said Millrood, a trial lawyer in suburban Philadelphia. “These plaintiffs allege they’ve been wronged, hurt in some way. A lot of the dynamic right now is the victim is being asked to pause, have sympathy for the company because of the current financial climate, wait.”

And civil cases are not at the top of the list when it comes to deciding which jury trials to hold, said Hannaford-Agor. Typically, criminal defendants in custody are first priority, followed by those who have bonded out and are awaiting trial. Civil cases come last.

“I’ve been hearing that a lot of settlement negotiations are being done with ‘the COVID discount,’” she said. “Plaintiffs who don’t want to wait for years are willing to take less.”

Despite the frustration and the backlogs, attorneys and court officials say they’re not criticizing states and counties for halting jury trials because of health and safety concerns.

“We will all work hard once this is over, and safely do so,” said criminal defense attorney Adams. “In the meantime, we shouldn’t force jurors into a situation where they can die doing their civic duty.”