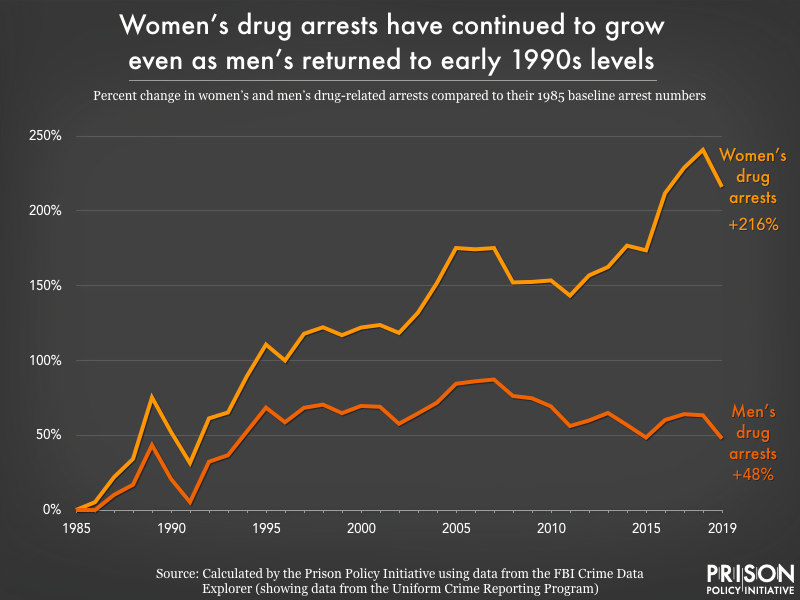 Over the past few years, reporting on and public awareness about the plight of justice-system-involved women — the fastest-growing incarcerated population for more than 40 years — has steadily grown. The Prison Policy Initiative has released a report that looks at the data from several fresh angles that reveal just how much the incarceration boom filling women’s jails and prisons has been driven by the war on drugs.

There are far more men in carceral facilities than women, who make up just 10 percent of the nation’s incarcerated population. Yet men’s incarceration rates have dropped by 33 percent since 1985, as the population inside women’s prisons and jails has increased by 25 percent.

“… Data on women has long been obscured by the larger scale of men’s incarceration,” according to PPI, which has been working to lift the veil on why women are incarcerated and what can be done to make sure that women aren’t “left behind” in the movement to drastically reduce incarceration nationally.

In local jails, where the majority of locked up women are held, population rates increased by 23 percent from 2009 to 2018, while the national men’s jail population dropped by 7.5 percent.

These disparities, the new report says, are largely due to the fact that the rate at which police arrested women for drug-related offenses has skyrocketed, jumping by more than 215 percent over the last 35 years. Drug arrests for men, meanwhile, increased 48 percent.

Women, moreover, are more likely to be locked up for possession, rather than trafficking. The report pointed to the 1990s’ rise of so-called “broken windows” policing strategies — centered on the idea that cracking down on lesser crimes prevents bigger ones — as a major factor contributing to women’s incarceration.

“Since public health research shows that women are also affected in unique ways by the opioid crisis, we decided to see whether drug enforcement trends and substance abuse could be contributing to the rising number of women behind bars,” the researchers wrote.

When PPI looked at the issue of drug use in the general population, they found that while men and women struggle with substance use disorders at relatively even rates, women are more likely to experience opioid addiction.

During the 17 years between 1999 and 2016, the number of women who died of opioid overdose deaths increased at nearly double the rate of men’s deaths (a 600 percent increase for women, and a 312 percent increase among men).

Additionally, approximately 70 percent of women serving prison and jail sentences (not including those held pretrial) have struggled with drug use, according to the report, and drug use among women in state prisons has outpaced that of men in recent years.

“Patterns unique to women’s incarceration are easily obscured when we focus exclusively on the larger, overall incarcerated population,” says the report. “And when we overlook incarcerated women as a unique group, we also fail to address the additional challenges they face — including different health care needs and a greater likelihood of being a primary caretaker of young children — that make their growing numbers all the more alarming.” The researchers call for further research to “understand the continued rise in women’s incarceration — and to make sure reforms impact women as well as men.”