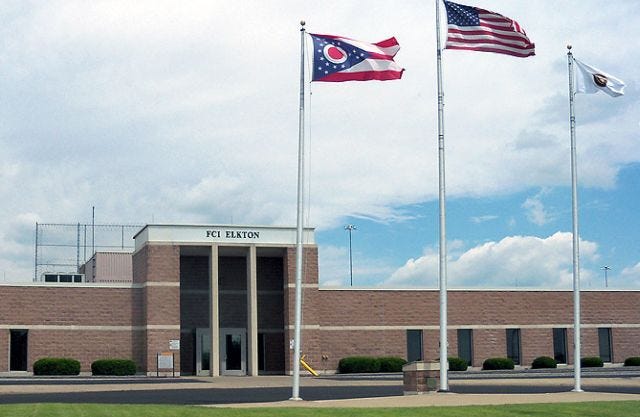 On April 3, Attorney General William Barr sent his now-well known memorandum to Bureau of Prisons Director Michael Carvajal, directing Carvajal to move as many minimum-security inmates out of prison and into home confinement, or a similar situation, as was possible during the COVID-19 emergency in order to “combat the dangers” the virus posed to our most vulnerable inmates “while ensuring we successfully discharge our duty to protect the public.”

Of the approximately 177,000 people residing in BOP facilities, around 27,600 are classified as minimum-security.

In this memo, Barr called out three of the prisons that he noted were already experiencing “significant levels of infection,” and ordered Carvajal to “immediately review” all inmates “with COVID-19 risk factors,” starting with the three prisons he’d mentioned.  One of those prisons was Elkton FCI, located in Ohio.

Yet, in the weeks since the Barr memorandum was made-public, very little appears to have happened in the way of releases, including at the facilities about which the AG particularly expressed concern.

Hoping to speed things along,  on April 13, the ACLU of Ohio and the Ohio Justice and Policy Center brought a class-action lawsuit on behalf of people locked up in Ohio’s FCI Elkton.

The emergency legal filing asked for the release of Elkton’s most vulnerable inmates to home confinement, parole, or via furlough to half-way houses, or similar facilities, where they would serve their sentences in a safer environment until the risk of the virus had abated.

“With the shockingly limited available testing and the inability to distance inmates, COVID-19 is going to continue to spread, not only among the inmate population, but also among the staff,” Judge Gwin wrote.

(At the time, Elkton reportedly had received only 50 COVID-19 swab tests, and one Abbott Rapid testing machine with 25 rapids tests.  Most of the swab tests were used and showed a worrisome percentage of positives, while the Abbott tests were reportedly back-ordered and would not arrive until July or August.)

Gwin told Elkton to submit to the court a list of “Medically-Vulnerable Subclass Members,” and to release or transfer or furlough all of those people within 25 hours, specifying that such releases or furloughs and the like did not necessarily mean release from custody.

Although the order seemed to follow the lead of Barr’s memo, the BOP fought back and appealed Judge Gwin’s order to the Sixth Circuit Court of Appeals, claiming that all kinds of terrible and damaging things would happen if the order was followed—or general words to that effect.

On May 4, however, a three-judge panel from the Sixth Circuit slapped down the Bureau of Prisons’ appeal unanimously, refusing to stay the enforcement of the district court’s order to begin transfer and release of what turned out to be 837 medically-vulnerable prisoners from Elkton FCI.

“The district court found that Elkton’s dorm-style structure rendered it unable to implement or enforce social distancing,” wrote the three judges in their directive.  “The COVID-19 virus, now a pandemic, is highly contagious and can be transmitted by asymptomatic but infected individuals.”

The Sixth Circuit trio noted that Elkton already has higher occurrences of infection than most other federal prisons. And, as Judge Gwin had already pointed out, “respondents lack adequate tests to determine if inmates have COVID-19.”

David Carey, Senior Staff Attorney for the ACLU of Ohio praised the appellate court’s decision, which he said, “confirms the urgent need to respond to the crisis unfolding at Elkton. Lives of prisoners, prison staff, and the community depend on swift action to move the most vulnerable people away from the COVID-19 outbreak before it is too late,” Carey said.

David Singleton, Executive Director of the Ohio Justice & Policy Center, was similarly thrilled with the Sixth Circuit’s decision. “The court’s ruling is grounded in precedent and allows this litigation to proceed with the urgency that this life-and-death situation demands.”

Meanwhile, today, Wednesday, May 6, the BOP reported that an eighth person at FCI Elkton has died of COVID-19.  His name was James Druggan, and he was 70-years old.

And closer to home, at the Federal Correctional Institution (FCI) Terminal Island, as Rebecca Weiker reported for WitnessLA earlier this week, 623 of the Terminal Island residents and 15 staff members have tested positive for the virus.

Six residents have died due to COVID-19.