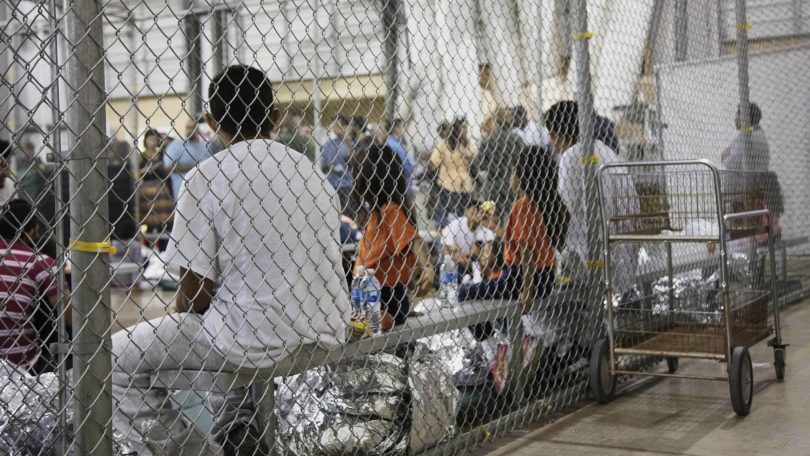 An immigration official announced this past Friday that, in the 42 days between April 19 and May 31, approximately 2,000 immigrant children were removed from the care of their parents and taken into federal custody.

As of Sunday, the number is up to 2342 kids, a number that climbs by approximately 67 kids every day.

At the same time, 11,000 immigrant children are now in shelters, according to the Office of Refugee Resettlement. “Shelters,” however, appears to be a catch-all term for a wide variety of facilities that vary from small, generally child-friendly structures, to a converted Walmart with limited exposure to sunlight, to an old warehouse in South Texas, where hundreds of children wait in a series of temporary cages made of metal chain link fencing.

Over the weekend, a tent city of sorts opened up to hold immigrant kids and adults, also in Texas.

On Sunday, reporters and others were allowed inside the South Texas chain link cage-filled facility, which most people now call Ursula, for the street on which it is located, and what they described was not encouraging. Kids rest in one of the cages at a facility in McAllen, Texas, Sunday, June 17, 2018., photo courtesy of U.S. Customs and Border Protection’s Rio Grande Valley Sector via AP

“A 16-year-old girl was taking care of this child who followed her around asking for her diaper to be changed,” reported Michelle Brané, director of migrant rights at the Women’s Refugee Commission. “No officials “were concerned or cared.” In another instance, Brané tweeted in fury about a cluster of five-year-olds she watched being scolded by stressed officials for playing. Yet there were no visible toys or books or other items that the kids could use to occupy themselves, she added.

As harrowing accounts continued to surface of kids being forcibly separated from their parents, and of unaccompanied minors who surrender to officials at or near the border winding up in detention facilities, physicians began warning about the psychological harm that was being done to these children, and its long-term negative implications.

“[What is occurring] can cause irreparable harm to lifelong development by disrupting a child’s brain architecture,” Colleen Kraft, the president of the American Academy of Pediatrics told BuzzFeed News this week. “Immigration has become so politicized. We would really like people to sit back instead and think of the health of these children.”

It didn’t help Kraft’s outlook when she was persuaded by other very upset physicians to visit a shelter for immigrant children separated from their parents, which was also in South Texas. Kraft told NPR reporter Joel Rose on Morning Edition that she was particularly undone by a little girl she saw at the shelter who could not stop crying. The girl “couldn’t have been more than 2-years-old,” Kraft said. “Just crying and pounding and having a huge, huge temper tantrum. This child was just screaming, and nobody could help her. And we know why she was crying. She didn’t have her mother. She didn’t have her parent who could soothe her and take care of her.”

Kraft added that staff at the shelter told her regulations did not allow them to touch or hold children to soothe them.

“We know that family separation causes irreparable harm to children,” Kraft wrote in an official statement the AAP released on Friday. “This type of highly stressful experience can disrupt the building of children’s brain architecture. Prolonged exposure to serious stress – known as toxic stress – can lead to lifelong health consequences.” The day before the AAP statement was released, the American Psychological Association (APA) wrote its own letter to the president using strong terms to convey a similar message.

So, is it true? Is the effect of this kind of trauma for children really that extreme and long-lasting?

The short answer is, yes. It really is.

So what are we talking about when we talk about trauma?

At WitnessLA we’ve been writing off and on about the effect of trauma on kids and adults since our launch in 2007. But here’s a bit of background on the topic that most pertains to the subject at hand.

The easiest place to begin is with what is known as the ACE study.

From 1995 to 1998, a physician and researcher named Dr. Vincent Felitti, who was, at the time, the chief of the Department of Preventive Medicine for Kaiser Permanente in San Diego, together with Dr. Robert Anda from the U.S. Center for Disease Control and Prevention (CDC), conducted an unusual study in which they asked more than 17,421 Kaiser patients about ten categories of childhood trauma, which Felitti and Anda termed adverse childhood experiences or ACEs.

Felitti, whose preventive medicine department had become internationally known for the skill of its medical evaluation center, launched the ACE study after he discovered, somewhat by accident, that several hundred of the patients enrolled in his obesity clinic had been sexually abused as children. Flabbergasted at the high numbers, he decided to explore this trauma/health connection a little further. After hearing of his unusual, but still limited findings, epidemiologist Robert Anda decided to sign on to Felitt’s research plans, bringing the CDC with him. When WitnessLA spoke to Dr. Felitti years later in 2014, he explained that when he and Anda began the 1995 study, he coined the ACEs term because the term “trauma” has, for obvious reasons, a negative connotation, whereas the term adverse childhood experience sounds more neutral. This meant that research subjects asked about the latter rather than the former, tended to answer questions more easily and honestly.

After analyzing the initial data that resulted, in 1998 Felitti and Anda published their findings, which showed what appeared to be an irrefutable relationship between their subjects’ ACE scores and their physical and emotional health later in life.

After those first findings, Felitti and Anda continued to follow their subjects over subsequent years with periodic updates, and the correlation became even stronger and more specific. Dr. Robert Anda, formerly of the CDC, via RobertAndaMD.com

In a 2002 article published in a medical journal, Felitti wrote further about the results of his and Anda’s research for medical professionals.

“The findings are important medically, socially, and economically,” he wrote. “They provide remarkable insight into how we become what we are as individuals and as a nation. The ACE Study reveals a powerful relation between our emotional experiences as children and our adult emotional health, physical health, and major causes of mortality in the United States. Moreover, the time factors in the study make it clear that time does not heal some of the adverse experiences we found… in the childhoods of a large population of middle-aged, middle-class Americans. One doesn’t ‘just get over’ some things.”

Building on the Kaiser ACE study

Although the results of Felitti and Anda’s 1998 study were incredibly dramatic, it took awhile before anyone outside a certain circle of medical professionals and researchers really talked much about the profound implications the ACE study revealed.

Eventually, of course, the Kaiser study became the foundational research from which an entire area of inquiry has developed, along with parallel research that has delved further into why something traumatic that happened to you at age seven could lead to a physical condition forty years later.

Now we know that certain kinds of childhood trauma can trigger chemical reactions that in turn produce long-term changes in a kid’s brain structure, and that high ACE scores can compromise the immune system, produce learning issues, and dramatically increase the likelihood of high-risk behavior, of depression, of suicidality, of later incarceration, and lots more.

These correlations were illustrated strikingly in a California study released in November 2014 by San Francisco’s Center for Youth Wellness, led by Dr. Nadine Burke-Harris.

(Burke-Harris has become a leading voice in the world where childhood trauma and health intersect, and her TED talk is an excellent short course in the issue, if you’ve not ever seen it.)

(The Behavior Risk Factor Surveillance System, which was established in 1984 by the Centers for Disease Control and Prevention, is the nation’s premier system of health-related telephone surveys that collect state data about U.S. residents regarding their health-related risk behaviors.)

The 2014 study found that a Californian with 4 or more ACEs was:

More recent information demonstrating more specific ACEs’ effects emerged from a 2017 UCLA study, published in the American Academy of Pediatrics, which gathered data from 14,344 participants from the National Longitudinal Study of Adolescent to Adult Health, 14% of whom reported being locked up between the ages of 12 and 23. Of those, 50.3% were incarcerated for one month or less, 35% were locked up between one and 12 months, and 15% were incarcerated for a year or more.

The underlying national study that the UCLA team worked with was longitudinal, in that the researchers interviewed their subjects first as adolescents and then a second time between the ages of 24 and 34. From the second round of data, the UCLA researchers learned, for example, that those young people who were incarcerated for up to a month were 41% more likely to experience depression as adults than the study’s participants who had never been incarcerated, among a list of other problems. And those who were locked up between a month and a year were 48% more likely to report worse general health than their non-justice-system-involved peers. This was after researchers had controlled for factors like race, income, parents’ education level and more.

These 2017 findings about the adverse physical and psychological effects produced by just a month of confinement during childhood, of course, have a direct bearing on the difficulties faced by immigrant children whose heart-lacerating stories now appear daily in our news feeds.

The LA County Supes weigh in

With all of the above in mind, the Los Angeles County Board of Supervisors will vote on Tuesday on a motion co-sponsored by Supervisors Hilda Solis and Sheila Kuehl that, if passed, will  result in a letter send from the board to the Secretary of the Department of Homeland Security, the Senate and House leadership, and the Los Angeles County Congressional Delegation: