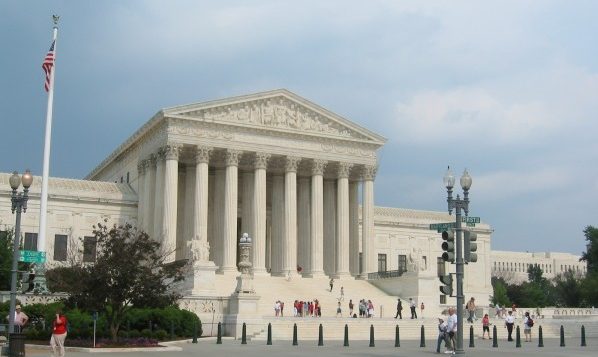 At the center of the SCOTUS case was Tyson Timbs, an Indiana man from whom officers seized a $42,000 Land Rover, after Timbs sold a small amount of heroin–$225 worth–to an undercover police officer.

Timbs was sentenced to one year of home detention to be followed by five years of probation, and was ordered to pay $1,203 in fines.

In this case, Timbs purchased his car with money from a life insurance policy after his father’s death, not drug money. But he did reportedly admit to using the car to commit drug crimes. The state of Indiana hired a private law firm, hoping to get Timbs’ vehicle through civil forfeiture because the man had transported heroin in it.

After Timbs was convicted, a trial court denied the state’s attempt to take the Land Rover, which, when Timbs bought it, was worth more than four times the maximum fine for Timbs’ drug crime–$10,000. The trial court said the forfeiture would violate the constitutional ban on excessive fines. An appeals court upheld the decision, but the Indiana Supreme Court disagreed, arguing that the clause only applied to the federal government.

Not so, said all nine U.S. Supreme Court justices.

The Constitution’s protection against excessive fines like the seizure of Timbs’ $42,000 Land Rover over $225 worth of heroin, “has been a constant shield throughout Anglo American history for good reason,” Justice Ruth Bader Ginsburg wrote for the court. “Such fines undermine other liberties.” Excessive fines “can be used … to retaliate against or chill the speech of political enemies,” said Ginsburg. “They can also be employed, not in service of penal purposes, but as a source of revenue.”

Last month, an immense, multi-part Greenville News investigation into every asset forfeiture case over a three-year period, found that police seized cash in 20 percent of cases in which no criminal charges were brought against a person. In another 20 percent of cases—involving nearly 800 people—there were no convictions. And an incredible 65 percent of the people who faced forfeiture in SC were black men. In South Carolina, black men account for just 13 percent of the population.

In response to the Greenville News investigation, 71 SC lawmakers introduced a historic bill that would drastically curtail asset forfeiture in the state, ensuring that people not convicted of crimes do not lose their property.

South Carolina, Indiana, and many other states (including California) circumvent their own forfeiture laws through the controversial federal Equitable Sharing Program, which authorizes law enforcement agencies to use seized money as revenue, with only “probable cause” that laws have been broken, by bringing the feds into an investigation.

The U.S. Department of Justice paid state and local agencies $643 million in 2013 through the Equitable Sharing Program.

In 2016, California legislators passed SB 443, a bill establishing that police cannot keep assets under $40,000, unless the owner is convicted. (Previously, the amount was set at $25,000.) Officers must meet a lower burden of proof to permanently seize assets in excess of $40,000. Officers have to be able to give “clear and convincing evidence” beyond a reasonable doubt, that the cash or property was connected to a crime. Law enforcement lobbyists killed a similar bill introduced in 2015, successfully convincing enough lawmakers that local agencies and governments sorely need the extra funds garnered from asset seizures.

In a 2015 report called “Policing for Profit,” the Institute for Justice gave California a C+ grade for its civil asset forfeiture laws. But California also ranked second-worst—50th out of 51 states (and DC)—for its heavy participation in the DOJ’s Equitable Sharing Program.