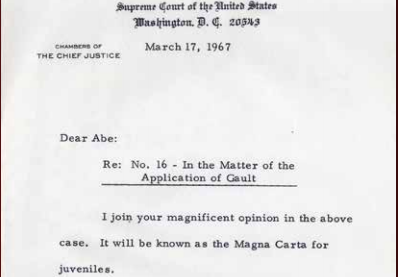 It has been 50 years since the 1967 US Supreme Court ruling in In re Gault established that youth in juvenile court proceedings have a constitutional right to counsel. Yet states fail to ensure that kids have access to adequate legal representation. A report by the National Juvenile Defender Center (NJDC) takes a state-by-state look at the shortcomings of juvenile defense that remain five decades after Gault.

The high court ruled in Gault that all children have due process rights, including “the guiding hand of counsel at every step” of court proceedings against them. However, according to NJDC, “no jurisdiction in the United States wholly fulfills the constitutional promise of justice for children.”

Only 11 states provide all children with a lawyer, regardless of finances. In 9 states, families are charged an administrative or application fee between $10 and $50 to access a public defender. What this means is that “families must pay to prove they do not have enough money for a lawyer,” according to the report.

Just eight states have laws requiring that juveniles always see an attorney before waiving their right to legal representation. Two states require hearings to determine whether children understand their decisions to waive counsel.

No state guarantees an attorney during every interrogation of a child. Just one state—Illinois—requires it under limited circumstances. (In IL, kids under 15 who commit certain crimes must be represented during interrogation.)

In California, children—no matter how young—can waive their right against self-incrimination without first consulting with an attorney.

In 2011, a 10-year-old with developmental disabilities named Joseph shot his abusive neo-Nazi father, Jeffrey Hall, in the head while he slept. The night before, the father had threatened to burn their Riverside home down while his family was sleeping.

When a police detective asked Joseph if he understood his right to remain silent, the boy answered, “Yes, that means I have the right to remain calm.” Joseph was permitted to waive his Miranda rights and confess to the murder. California’s Supreme Court denied a petition on behalf of Joseph to review the case, and later the US Supreme Court refused to take up the case.

In response to the case, California Senators Ricardo Lara (D-Bell Gardens) and Holly Mitchell (D-Los Angeles) have been working to ensure kids’ rights are protected. This year, the legislators re-introduced a bill, SB 395, that would require that kids under the age of 18 consult with an attorney before they are interrogated by police, and before they waive their Miranda rights.

“Expanding Miranda protections are critical because a child is more likely to give a false confession, and that hurts the child and the investigation,” said Sen. Lara.

Post-sentencing counsel for juveniles is crucial to ensure that kids are treated fairly while under the supervision of court or state. Yet only 11 states provide juveniles with access to a lawyer after sentencing.

Beyond sentencing, youth often need lawyers to assist with appeals, probation review or revocation hearings, efforts to seal or expunge juvenile records, and removal from offender registries. In addition, after sentencing, attorneys can act as advocates for their clients, ensuring that kids have access to family visits and education, are not held in prolonged solitary confinement, are provided adequate physical and mental health services, and more.

In their report, NJDC recommends that states implement across-the-board eligibility for public defenders for children, regardless of financial circumstances. In addition, local governments should not levy fees against families seeking access to publicly funded counsel. Children should also have access to a juvenile defender before interrogation, and “well in advance” of a first court appearance, says NJDC. All states should ban the waiving of the right to counsel unless a youth has had spoken with a juvenile defender about the consequences of waiving counsel.