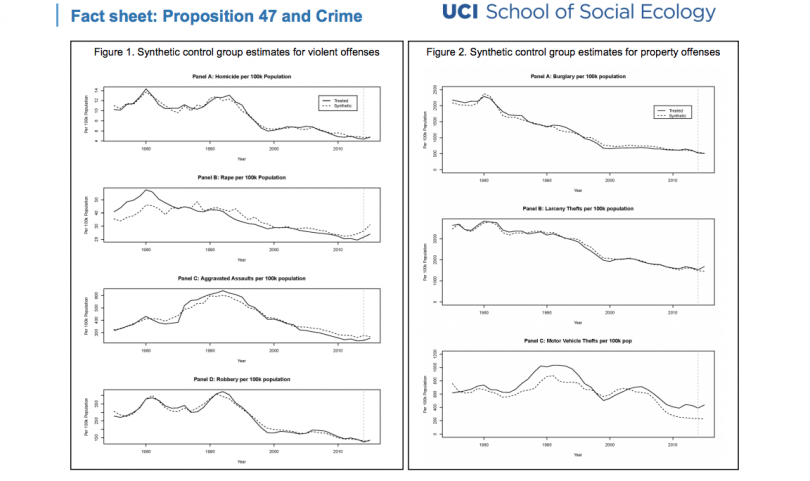 California’s voter-approved Proposition 47—which downgraded six low-level drug and property-related felonies to misdemeanors, and thus, reduced the state’s prison population—has been repeatedly accused of having harmed the state’s public safety by causing a spike in crime.

Now, a new study from the University of California, Irvine, suggests that the blame is misplaced.

“Many people assume that since rates for some types of crime went up after the passage of Prop. 47, that it must be the cause, but our study indicates that is not the case,” wrote the team of researchers. On Friday, the Association of Deputy District Attorneys disputed Kubrin and Bartos’ interpretation of their findings, but we’ll get to that in a minute.

According to Kubrin and Bartos, the problem that analysts ran into previously when attempting to determine whether or not Prop. 47 caused the state’s crime rates to rise, is that they had no “control” against which they could assess how California’s crime rates would have behaved without Prop. 47’s implementation.

To deal with this scientific roadblock, Kubrin and Bartos created what they call a “synthetic California,” which they in turn  used as the control for studying crime rates before and after Prop. 47.

To create this synthetic state, the researchers looked at data from the 44 years between 1970 to 2014 (when Prop. 47 kicked in) and then selected with a group of states that experienced crime trends similar to those of California, prior to the end of 2014, when Proposition 47’s effects would have been felt. The combination of these states’ crime rates serve as the “control California,” which the researchers compared with California’s crime rates in 2015, after the passage of Prop. 47.

And what they concluded was that the legislation was not responsible for increases in homicide, rape, aggravated assault, or robbery in California. “When we compared crime levels between these two California’s, they were very similar, indicating that Prop. 47 was not responsible for the increase,” Kubrin said.

The researchers did note, however, that property crime trends appear to show Proposition 47 caused an increase in larceny and motor vehicle thefts, “but these findings do not withstand sensitivity and robustness testing,” they wrote.

“What the measure did do,” continued the researchers, “was cause less harm and suffering to those charged with crime. Of course, we want to keep our streets safe, but we also want to be as humane as possible along the way. And it’s good to cut criminal justice costs, especially when that money can be earmarked for crime prevention programs, as some of the money saved by Prop. 47 is supposed to be.”

These initial findings are part of a forthcoming study by Kubrin and Bartos to be published in the Journal Criminology & Public Policy.

Yeah, but which crimes are we talking about?

On Friday morning, the Association of Deputy District Attorneys disagreed firmly with the study’s findings, in the form of a blog post by ADDA’s Los Angeles president, Michele Hanisee. The ADDA made some important points.

First the prosecutors pointed out that although Prop.47 changed the designation for certain low level drug crimes, the study did not consider drug offenses at all.

“Instead, it examined ‘Part 1′ crimes which include homicide, rape, aggravated assault, robbery, burglary, auto theft and larceny.” However, since, Prop 47 only affected the sentencing on drug offenses and larceny offenses (and, to some small degree, auto thefts if the car is valued at less than $950),” the ADDA argued, it was “irrelevant” to consider its impact on “homicide, rape, aggravated assault and the other Part 1 crimes that Prop 47 never addressed.”

We’d like to interject here that Prop. 47 has been blamed by many critics for any and all upticks in crime, including Part 1 crime, but we fully get the prosecutors’ point.

So, what were the results of the study regarding larceny crimes in 2015? “Not surprisingly,” said the prosecutors, “the study showed that ‘Prop 47 did have an impact’ and ‘the larceny effect appears significant.”

Only larceny, wrote the researchers, “appears to have an impact that is large relative to the unidentified variation observed in donor pool states.”

Indeed, while the rest of the crimes that the study looked at, including auto theft, appear unaffected by the ballot proposition. Larceny, however, was, according to the study, although the authors appeared to downplay this part of their findings.

The challenge of determining the causes of crime trends

This new UCI study isn’t the first time that co-author Charis Kubrin, who has studied crime trends for 20 years, has been involved with research pertaining to the effect of California’s reform measures on crime. (Bradley Bartos, a Ph.D. student in criminology, while newer to the study of crime trends, co-authored a leading next on the intriguing synthetic control method.)

In 2016, she co-edited a massive study looking at the effects on public safety of California’s “realignment” prison reform strategy. The study, which was funded in part by the National Science Foundation, was a compilation of work by researchers from a group major California universities, including the Public Policy Institute of California and UC-Berkeley.

The findings—which took up the entire issue of the The Annals of the American Academy of Political & Social Science, which was guest edited by Kubrin and her UCI colleague Carroll Seron—concluded that the state’s prison downsizing strategy put in place by AB 109 had no significant effect on the state’s crime rate, despite many claims to the contrary..

Kubrin spoke to KPCC’s Rina Palta, who reported at the time on the 2016’s study’s release, about the work, which she said back then presented the most comprehensive investigation into the impacts of 2011’s prison realignment to date, and answered the biggest question the reform raised.

“Is California more dangerous as a result of realignment? The answer is ‘no,’ ” Kubrin said..

Now Kubrin’s newest work suggests the same may be true of the often maligned Prop. 47—except maybe in the category of larceny.

Since we published this story, we notice that the San Francisco Chronicle too did a story on the study, in which they briefly noted the DA’s objections.

The Chron story, which is written by the very smart Bob Egelko, contacted the study’s co-author, UCI Professor Kubrin, and asked her about the ADDA’s objection to her dismissal of the admitted rise in larceny as irrelevant, and not caused by Prop 47.

“Our analysis tells us Prop 47 was not responsible,” Kubrin told Egelko, “so it must have been something else,” such as poverty, inequality, guns or drugs. Kubrin went on to tell Egelko that it was the first systematic analysis of the ballot measure’s effect on crime rates and has been reviewed by top scholars in the field.

We are genuinely very grateful to Kubrin, Bartos, and UCI for their fine and innovative research that has gone a long way to counteract the anecdotal, non-fact based criticism, of Prop. 47. However, when the ADDA and Bob Egelko posed a legitimate question about the significant rise in larceny rates after Prop. 47’s passage, a reply “Trust us,” and “all the smart people say we’re right,” or words to that effect, is not sufficient.

No doubt Kubrin and Bartos have a research-based explanation for the larceny numbers. But, if so, they need to be able to explain it to the rest of us who belong to the great unwashed masses out here.

Their failure to do so does harm to the rest of their valuable research.

On Monday, we heard from UCI professor Charis Kubrin who kindly responded to our criticism. Kubrin thanked us for “bringing attention to this important issue” and directed us to the formal response that she and Bradley Bartos made to the ADDA’S criticism, which you can find in full here.

In brief, however, here are some of the main points that Kubrin and Bartos made.

1. Our study set out to answer one fundamental question: did Prop 47 have an impact on violent and property crime in the year following its implementation? We find that it did not.

2. As we mention briefly in the press release and explain in detail in the paper, our initial model suggests that larceny more than any other offense category may have experienced an increase following Prop 47. However, when we subject this finding to standard post-estimation tests, we are unable to reach a definitive causal conclusion regarding Prop 47’s impact on larceny. In particular, the finding was sensitive to alternative compositions of Synthetic California. Thus, we are unable to reach our goal of identifying a causal effect on larceny.

Or in simpler terms: Yes, larceny went up the year after Prop. 47 but when we subjected that simple finding to further analyses and tests to reveal causality, we could not convincingly attribute the rise to Prop. 47.

In any case, we thank Kubrin and Bartos for taking the time to address the questions that we and the ADDA raised.