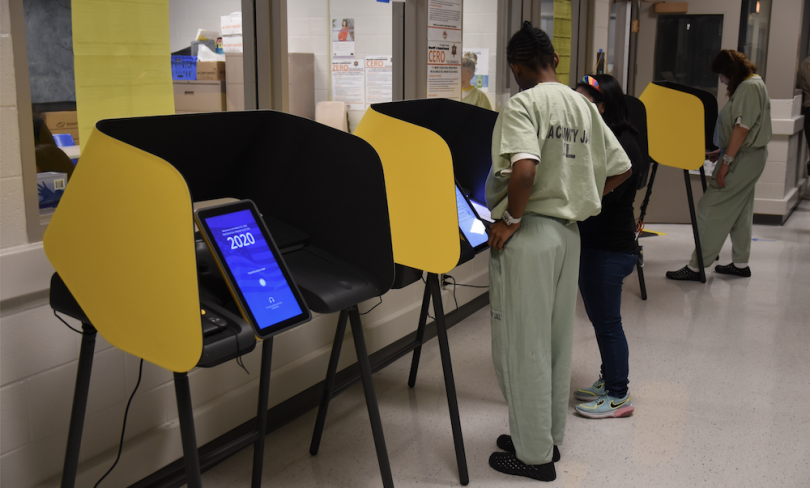 At a joint press conference on Sunday, Los Angeles County Registrar-Recorder Dean Logan, and Sheriff Alex Villanueva announced the launch of a “We All Count” campaign to educate and assist eligible voters locked in LA County jails with the registration and voting process, with the help of the ACLU and other partner organizations in the community. 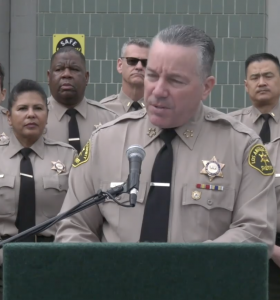 In the program’s first day — and the first day of early voting in California — nearly 2,200 incarcerated Angelenos were registered to vote — more than any previous year, according to Sheriff Villanueva. And inside CRDF, 35 women voted using the new mobile voting machines. (In all other facilities, eligible voters are using mail-in ballots, as in previous years.)

So far, the registration numbers represent a mighty victory considering confusion over voting laws keeps eligible voters from exercising their right to vote, often out of fear of possible prosecution. (Horror stories like those of Keith Sellars and Whitney Brown certainly don’t encourage justice system-involved people to vote.)

State law currently disenfranchises people convicted of felonies who are serving time in state or federal prison or who are on parole. Californians with felonies on their records can, however, vote once they have completed parole.

And nearly everyone in jail can still vote.

People in jail may register and vote if they are awaiting trial, serving a misdemeanor sentence (a misdemeanor never affects your right to vote), or if they are in jail as a condition of probation, or because of a probation violation.

Those citizens locked-up for non-serious felonies serving time in county jails or under county supervision through CA’s prison realignment (AB 109), are also allowed to vote, a right that was clarified and affirmed by AB 2466, a bill then-Governor Jerry Brown signed in 2016.

The ultimate goal, is to foster civic engagement that formerly incarcerated folks take back out into their communities, Villanueva said on Sunday. “If the inmates within our care and control are engaged civically here, once they go back out into their local communities, they’re going to continue that behavior. We expect them to continue participating, voting in elections, and successfully reintegrating into society.”

It was important that the sheriff’s department encouraged those in jail “to vote and express opinions on issues which affect themselves and their families,” Villanueva added.

In addition to getting to vote for state and federal lawmakers, LA City councilmembers, LA County supervisors, and the LA County District Attorney, justice-involved voters will also vote on Measure R, which directly impacts people in LA County jails.

For those unfamiliar, Measure R would give the Civilian Oversight Commission (COC) overseeing the sheriff’s department the ability to subpoena documents and compel testimony. The ballot initiative would also require the county to develop a plan for reducing the LA County jail population.

Over the weekend, teachers inside the jails taught a civics course to more than 7,000 incarcerated people to help them “gain a basic understanding of politics, government, and a brief history of how our nation’s governments were developed,” Logan said. Department staff trained as “deputy registrars” visited every housing unit in the jail system and helped individuals register to vote in the primary election.

A Long Road to Streamlined Voting in LA County Jails

The ACLU of Southern California has been keenly focused on bringing jailed individuals into the ranks of voting citizens in LA and the OC. The “We All Count” campaign is largely a result of the ACLU’s efforts to expand voting opportunities in the jail system.

Twenty years ago, in 2000, the LA County Board of Supervisors approved a motion that required the registrar-recorder and sheriff to work together to develop voter education and registration strategies for eligible incarcerated people, with the help of volunteers.

By 2004, just under 200 people in LA County jails registered to vote, but few actually turned in their ballots, according to Registrar-Recorder Dean Logan.

The system has slowly improved since then, election after election.

In 2012, a little over 1,200 eligible people registered to vote inside the jails, and more than 600 cast their ballots, Logan said.

In 2017, the ACLU approached the Registrar-Recorder’s Office and proposed working together to develop a model program that could eventually be replicated across the state. “I’m pleased to say that we achieved that,” Logan said.

In July 2018, the Los Angeles County Board of Supervisors approved a motion by Supes Mark Ridley-Thomas and Sheila Kuehl to create a “Voter Engagement Taskforce” co-led by the Registrar-Recorder’s Office and the Office of Diversion and Re-entry, and comprised of other county departments and more than two dozen community-based organizations. The taskforce focused on registering as many people involved in the criminal justice system in advance of the November 2018 election as possible.

With all this focus on improving voter turnout in the jails, and through the partnership with the ACLU’s “Unlock the Vote” campaign, more than 2,000 people in LA jails were registered, and 1,410 cast ballots in the 2018 midterms.

“For this 2020 primary election, the sheriff has offered unprecedented access and support for volunteer organizations,” Logan said.

The sheriff, registrar-recorder, the ALCU of Southern California, the Los Angeles Regional Reentry Partnership, Susan Burton’s A New Way of Life, and the League of Women Voters – Los Angeles, are making history, Logan said, by ensuring incarcerated Angelenos have unprecedented access to voting education and opportunities this election.

“I’m just so proud of the partnership, and the work that we’re doing together here in Los Angeles County,” the registrar-recorder said.