Do Americans want their policymakers to take a second look at some of the outsized sentences that U.S. courts—state and federal—began handing down nearly 40 years ago?

In the same vein, do Americans believe prosecutors should reexamine these ultra-long sentences and the individuals who are serving them, to see if early release from lock-up for at least some of those people would be safe and available?

The progressive think tank, Data for Progress, decided to find out.

So, between Feb. 7, 2020, and Feb.10, 2020 the Data for Progress group surveyed 2400 likely voters across the nation and asked them what they thought on the general topic.

The poll’s results, and accompanying report, were released last week, and what the researchers found genuinely surprised

Overall, 69% of voters supported “second look” legislation that allows for “the re-examination of old sentences to provide a second chance for people who have been in prison for more than ten years and who can be safely returned to the community.”

Yet the most surprising part of the results was the fact they showed support for the reforms was bipartisan and cut across geographic and ideological lines.

The just-released report on the findings — written by attorneys  Sean McElwee of Data for Progress, Kyle Barry and Ben Miller from The Justice Collaborative, and Miriam Aroni Krinsky of Fair and Just Prosecution (FJP) — found that support for second-look legislation among voters who characterized themselves as “very conservative” was 63%, and support among voters who saw themselves as “very liberal” was 82%. 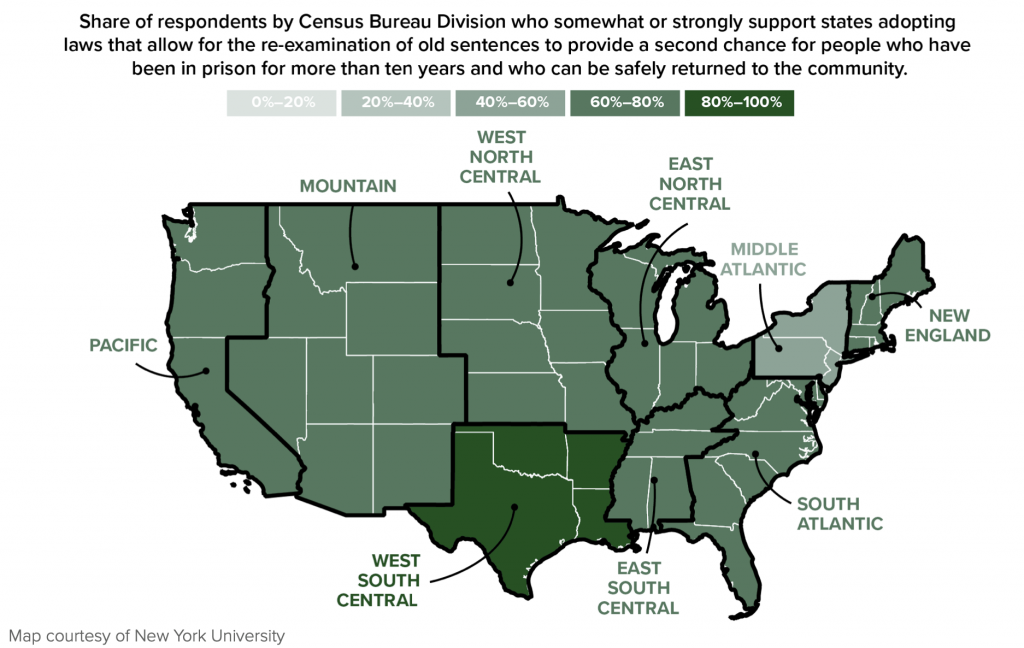 Yes,  the self-described very liberal among those surveyed supported the reform by a greater margin, but the majority of the very conservative voters also wanted change.

These numbers correlated with the support the researchers measured when viewing the results along party lines, with 81% of Democrats and 64% of Republicans supporting such new laws.

Similarly, two-thirds (67%) of all voters surveyed supported the idea of “elected prosecutors reexamining past sentences to provide a second chance to people who have been in prison for ten years or longer and who can be safely returned to the community.”

As with the preference for “second look” legislation, strong support for prosecutors doing their own sentence reviews also cut across political lines with 69% of “very conservative” voters, in favor and 73% of “very liberal” voters supporting proactive action on the part of their elected DAs.

For a better understanding of the significance of the survey, it helps to glance at some history:

For a very long time, the United States has held the uncomfortable title of being the world leader when it comes to incarceration.

One of the big drivers of that outlier distinction is the fact that, during the law and order years of 1980’s and the 1990’s, at both a state and federal level, due to “mandatory minimums” and sentencing enhancements, prison terms began getting longer and longer, with life sentences, or the equivalent of life sentences—terms that ran over 100 years—being handed out as if there was no other way to keep the nation’s communities safe.

The fact that most other nations didn’t find they required the same lock-’em-up-throw-away-the-key response to equivalent crimes in order to meet the needs of public safety, seemed not to matter.

In the last few years, however, both public attitudes and public policy have begun to change. In California, where we led the rest of the nation with such sentence-lengthening statutes as three-strikes, 10-20-Life, the STEP act, and others, a partial roll-back has been taking place.

Yet, despite the “emerging bipartisan consensus around the need for criminal justice reform,” wrote the report’s authors, there hasn’t been a lot of action among policymakers to address the fact that a large number of the men and women serving lengthy sentences “no longer pose a serious risk to public safety.”

As a consequence, even as the U.S. begins to rely less on incarceration going forward, hundreds of thousands of people are being warehoused in prison serving long sentences.

“The city of Philadelphia alone,” the authors wrote, “has more people sentenced to life without the possibility of parole than any other country in the world.”

In California, over 30,000 people are serving a life sentence, and 31 percent of the state’s prison population has a sentence enhanced by California’s three strikes.

Statistically speaking, an aging prison population is both low risk and high cost since a great many people “age-out” of criminal behavior, according to a 2016 report from the Brennen Center for Justice., meaning hundreds of thousands of people who pose little to no threat to public safety are stuck behind bars.

And, without big changes, if we continue at current rates, according to the new Data for Progress report,  in ten years one in three people in American state prisons will be over 50.

As mentioned above, the survey asked its respondents about two specific ways that the problems created by previous decades of over-sentencing could be addressed.

One is the advent of “second look” legislation, that allows for the re-examination of old sentences to provide a second chance for people who have been in prison for a designated period, and who can be safely returned to their communities.

The other is a form of sentence review that is led by prosecutors who proactively look for cases with which their offices were initially involved that would be appropriate for resentencing.

Yet, this second, prosecutor-led version of the needed reform requires regional DAs to widen their views of their traditional job descriptions since, historically, prosecutors have viewed their role in a case to be finished once a conviction is secured and all appeals have been finalized.

Yet, according to a new policy brief put out by Fair and Just Prosecution (the founder of which, Miriam Krinsky, was one of the survey report’s authors), a growing number of district attorneys have concluded that their offices have both the power and the responsibility to correct past injustices.

“A sizeable number of DAs,” states the FJP brief, “have established conviction integrity units or processes to revisit wrongful convictions.”

Some prosecutors, however, such as Larry Krasner, in Philadelphia, and Dan Satterberg in Seattle, have taken the concept one step farther to include the cases of those people who have been validly convicted but who are serving sentences that are disproportionate to their crime, and generally out-of-line with contemporary sentencing practices, or are deemed to be, in some other way, not just.

“I think we’re seeing a new generation of prosecutors who are increasingly embracing the view that dispensing justice, means doing the right thing,” said Krinsky when we spoke with her about the survey, and the brief.

This includes, she said, looking backward to correct past injustices.  “But that means, not only unjust convictions but also unjust sentences.”

Progress in California and beyond

For the resentencing to originate with prosecutors isn’t all that easy, legally speaking, as this Marshall Project story explains.   In most states, the Marshall Project writes, “courts allow a prosecutor to seek re-sentencing only in limited circumstances, such as when new evidence arises or when legislators pass a new sentencing law that needs to be applied retroactively.”

However, when San Jose District Attorney, Jeff Rosen became frustrated by his inability to get a judge to resentence certain inmates whose prison terms he deemed had become unjust, along with the ACLU and other reform advocates, he helped to push California lawmakers into passing a law that would make the needed change in AB 2942, which was signed by then-Governor Jerry Brown in September 2018.

There are other states where bills are now pending that would allow past sentences to be reopened and provide individuals with a second chance. Last year, New York State Senator Zellnor Myrie introduced a bill similar to California’s that would allow prosecutors to petition a judge to set aside a sentence, in most cases, after a person has served 15 years.

Yet, although California was one of the first states to create a legislative vehicle where prosecutors can go into court and proactively identify cases where individuals no longer need to be behind bars, only a few of the state’s local DA’s have taken advantage of their new powers other than Santa Clara’s Rosen and a very short list of others.

Alameda County District Attorney Nancy O’Malley, was one of AB 2942’s supporters, as was George Gascón who began to work on a sentencing review program when he was still in San Francisco, but there are not all that many more.

“The hope is that Los Angeles will eventually follow the lead of the others,” said Krinsky.

And, if the new survey is correct, it is likely that a majority of LA voters would agree if they were asked.