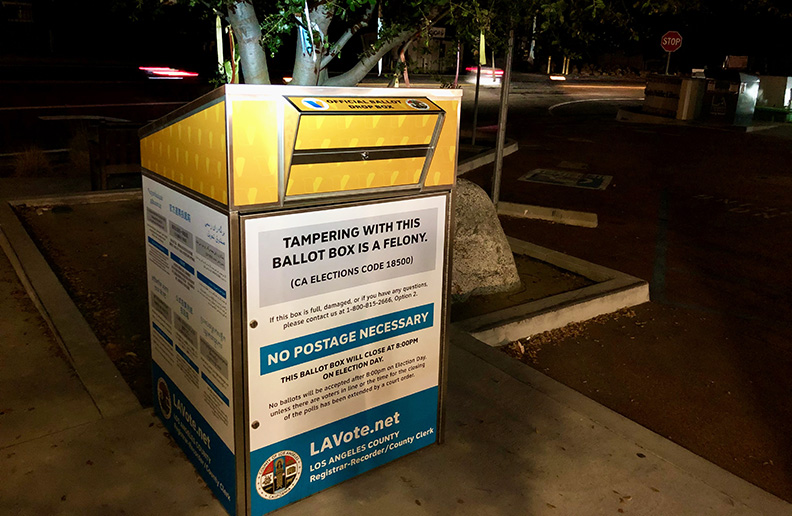 Self-appointed poll watchers across the U.S. are gearing up to patrol polling precincts on Election Day for signs of voter fraud — even though voter fraud is exceedingly rare. This dangerous development is all the more concerning because the 2020 presidential election will be the first since 1980 that will not be under the watch of a federal “consent decree” — a legal order that until it expired in 2018 gave courts a speedy way to block efforts to intimidate or harass voters.

Absent a federal response to voter intimidation or a good way for courts to oversee the process, local prosecutors must take on new responsibility for ensuring a free and fair election process.

The federal consent decree took effect after the 1981 New Jersey gubernatorial election, when some political strategists sought to block voters they claimed were fraudulent — many of whom were Black or Hispanic — from getting to the polls. In the 2020 election, many of the tactics used to intimidate voters in 1981 seem likely to re-emerge.

Some may justify these poll-watching efforts as necessary to prevent voter fraud, but experts repeatedly have found that in-person voter fraud is exceptionally rare. A comprehensive report from The Brennan Center reviewed elections meticulously studied for voter fraud and found incident rates of fraud between 0.0003% and 0.0025%, concluding that it is more likely that a voter “will be struck by lightning than that he will impersonate another voter at the polls.” The Washington Post similarly analyzed more than 1 billion ballots cast between 2000 to 2014, and found only 31 credible cases of impersonation fraud.

Yet even if in-person voter fraud were to occur this year, it is unlikely that poll watchers, without formal training or insight into the voter rolls, would be able to stop it. Rather, history has shown that these tactics are far more likely to single out and suppress the votes of people of color. And with confidence in the police at an all-time low, we simply can’t afford for communities to lose even more faith in the legitimacy of their government.

In the remaining weeks before the election, elected state and local prosecutors should redouble their efforts to spread the message that anyone who intimidates or harasses voters will be prosecuted. They should coordinate with their local Boards of Election to establish a plan for referring cases of voter intimidation for prosecution. They must also make sure that both voters and poll workers  know their rights and know how to report unlawful disruptions.

Along with other public leaders, elected prosecutors should educate voters on what, if any, identification they will need to vote. In the 21 states that allow voter registration on Election Day, prosecutors should make that choice clear. They should tell voters that anyone told by a poll worker that they are not on the voter roll has the right to request a provisional ballot and is able to challenge their eligibility with their local election authority.

As states continue the decades-old practice of purging eligible voters from the rolls, such protective measures will be especially important. Local prosecutors can post notices, send mailers, work with local media or speak directly to community groups to raise awareness of voters’ rights and ensure the public knows that violators will be prosecuted. For example, Vermont Attorney General TJ Donovan has been vocal about the rules imposed on election observers and his willingness to prosecute those who intimidate voters.

On Election Day, local officials should be prepared to respond quickly and decisively to reports of voter intimidation. They should have qualified experts, including prosecutors and municipal attorneys, ready to document concerns and, if possible, resolve disputes. They also should ensure that their teams are trained to sensitively defuse polling-place crises without escalating tension.

For example, in Fort Bend County, Texas, District Attorney Brian Middleton has established a task force that will spread throughout the county on Election Day, ready to address complaints of voter intimidation. In Fairfax County, Va., where local officials have already dealt with intimidation during early voting, Commonwealth’s Attorney Steve Descano has created a team that is trained on how to address the tactics used by militia groups to disrupt elections.

Officials should also be sure that they have strong systems to swiftly identify crises and deploy additional resources. In Philadelphia, District Attorney Larry Krasner has launched a hotline that will direct calls to his assistant district attorneys, who will be ready to send detectives to investigate reports of voter suppression or intimidation as they happen.

Voter suppression, not voter fraud, is the real problem

Rather than focus on voter fraud, which in fact is rare, it may be more beneficial to counter voter suppression, which is rampant in U.S. politics.

In 2000, before the presidential election was decided by a mere 537 votes in Florida, at least 12,000 eligible voters, disproportionately Black, were purged from the state’s voter rolls. This practice continues across the U.S. today.

Similarly, in 2016, estimates suggest that almost 1 million eligible U.S. voters were unable to cast their ballots due to problems with either the registration or voting process. This year, many voters will face burdensome voter identification requirements, reduced availability of polling sites, exorbitantly long lines, purged voter rolls and, of course, a pandemic. Any new obstacles seeking to intimidate or drive voters away from the polls will only cut more voices out of the political process.

Local elected leaders are needed now more than ever to speak out on behalf of protecting fair and free elections — and on behalf of all in their community who seek to exercise one of the most fundamental rights in our democracy: The right to vote.

Miriam Aroni Krinsky is executive director of Fair and Just Prosecution. The advocacy group recently released this video message on elections: Protecting The Integrity of Our Elections: A Message from DAs to America. Krinsky served for 15 years as a federal prosecutor, including on an organized crime and narcotics task force.