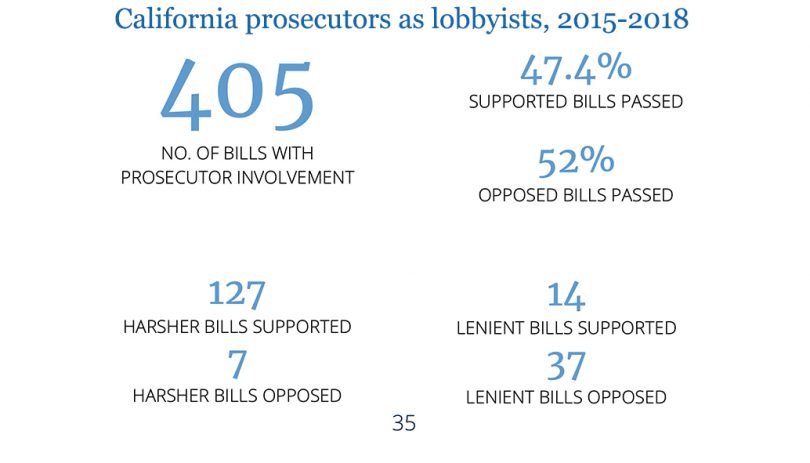 A new study by the “Prosecutors and Politics Project,” a research initiative at the University of North Carolina School of Law, looks at the role of prosecutors in the nation’s state criminal justice systems, with a focus on their their “political power,” specifically the power of DAs as lobbyists pushing for or against proposed legislation.

For their rigorous and very readable study, the North Carolina Law researchers confined their data gathering  to the three years from 2015 to 2018. In the 314-page report, the authors first lay out a view of the nationwide patterns of how prosecutors attempt to influence legislation.

Then in the bulk of the report, the researchers break out their findings by individual states, giving a detailed view of what local prosecutors and prosecutorial organizations are doing when it comes to political lobbying.

On a national level, the study found that, in general, American prosecutors are very active lobbyists when it comes to justice-related bills introduced by their respective state legislative bodies.

Although the U.S. is gradually moving in the direction of justice reform, for the most part, noted the study’s authors, during the three year period the study covers, across the nation, most prosecutors generally still favored bills that made criminal law harsher.

With the election of progressive district attorneys in the last few years — people like George Gascón in Los Angeles, Chesa Boudin in San Francisco, Philadelphia County’s recently reelected Larry Krasner, and a growing list of others — presumably the tough-on-crime emphasis will continue to gradually lessen.

But, during the three year period the study covers, — from 2015 to 2018 — state and local prosecutors were involved in more than a quarter of all criminal-justice-related bills introduced in the 50 state legislatures. Furthermore, they were nearly twice as likely to lobby in favor of a law that “created a new crime or otherwise increased the scope of criminal law,” than a law that would “decriminalize conduct,” or otherwise narrow the scope of criminal law and punishment, according to the North Carolina Law School researchers.

And, the study’s authors noted, for the most part the prosecutors’ attempts to put their thumbs on the legislative scales, generally worked.  In particular, when state prosecutors lobbied in favor of a bill, it was more than twice as likely to pass than an average bill.

Yet, interestingly, when prosecutors lobbied against a bill, their lobbying efforts faired far less well.

In state of California, the study found that prosecutors lobbied more than the national average.  In fact the golden state’s prosecutorial lobbyists were more than twice as active during the period studied, pushing for a preferred legislative outcome for approximately 56% of the criminal justice bills introduced in the state’s legislature.

During the period studied, California’s prosecutors lobbied either pro or con on 405 out of 745 the total criminal justice-related bills according to the study.

(Plus, there were an additional 24 criminal justice bills for which the researchers did not have sufficient information to determine for certain if prosecutors were substantively involved.)

Interestingly, when California’s DAs and others lobbied for or a against legislation, they were not spectacularly successful.

The California legislature passed 45% of criminal justice bills that were introduced during the time period.  Yet, when the statewide California District Attorneys Association (CDAA) lobbied in favor of a bill, the bill was just slightly more likely to pass (47.4% pass rate), then if the CDAA had stayed out of the matter.

However, when the CDAA lobbied against a bill, there was a greater likelihood that it would pass, adding up to a 52 percent passage rate for the bills that the prosecutors worked to kill.

The study’s authors note that the statewide organization was not the only lobbying entity. The state’s largest DA’s offices, such as Los Angeles San Diego, and Sacramento, also lobbied the legislature on behalf of their own offices.

(That is the same ADDA that has led the highly vocal opposition to many of the reformist policies of present LA DA George Gascón.)

So which bills did CA prosecutors try hard to kill?

The researchers were thorough as they examined which of the justice-related bills that each state’s lobbyist prosecutors opposed or favored — or chose to ignore.

In terms of methodology, the study’s authors identified every bill related to the criminal justice system that was introduced in every state legislature during the study period.

“A separate spreadsheet was created for each state,” they wrote, “and each bill was given its own row in the spreadsheet.”

(Curious readers may access the spreadsheets, which are archived here.)

When it came to California’s prosecutorial lobbyists, in general, the authors wrote, the CDAA opposed reforms intended to reduce sentences and further decrease prison populations throughout the state.

Among the bills the CDAA and other CA prosecutors opposed is AB 1448, a bill to release elderly inmates who were over 60 and had served at least 25 years on their sentence.

“Over the last decade, we’ve seen a steady erosion of constitutional principles of truth in sentencing, and Marsy’s Law, at the expense of accountability and public safety,”  the CDAA wrote regarding their opposition to the proposed law. “AB 1448 continues this troubling trend.”

Another typical bill the CDAA lobbied against according to the study was AB 2590, which allowed judges to impose “community-based punishment” for certain misdemeanors.

Not surprisingly, the CDAA opposed SB 1437, which changed the felony-murder rule “to require substantial participation in or knowledge of the murder itself.”

(After then Governor Jerry Brown signed the bill into law on September 30, 2018, the prosecutorial challenges continued.)

California’s prosecutors also opposed a list of youth justice reform bills such as SB 395, which required children under 15 to consult with an attorney before waiving Miranda rights.  Part of the bill’s raison d’être was to address the problem of kids giving false confessions.

“We believe that the procedure sought by this bill would frustrate criminal investigations and cast doubt upon voluntary confessions introduced at trial,” wrote the CDAA of SB 395, which passed despite prosecutorial opposition.

(WitnessLA wrote about how Jackie Lacey’s office put out a sort of instruction memo after the bill became law, suggesting how law enforcement could wiggle around SB 395, in order to question kids under 15 without having to make sure they consulted a lawyer first.)

Another youth justice bill California’s prosecutors opposed was SB 394, which eliminated Life Without Parole as a sentence for youth under 18.

The study also notes when certain prosecutors and DA’s offices deviated from the general state patterns, such as when Jeff Rosen, Santa Clara’s reformist DA, elected in 2011, supported a bill that would allow prosecutors to make a request for the court to recall and re-sentence cases, they believed were faulty.

“While we prosecute zealously those who commit crimes that harm members of our community,” wrote Rosen of the bill, according to the study. “I also recognize that there are some cases where new information casts doubt on the wisdom or justice of the original sentence…. I don’t believe a prosecutor’s job is done after the conviction, but instead the demands of justice continue. When we discover new evidence that points to innocence, we act. When we discovery new evidence that casts real doubts on the justice of a sentence, we need to act as well.”

Meanwhile, in Los Angeles during the period of the study, the local LA prosecutors union, the ADDA, opposed various reformist bills, such as bail reform that would prevent the detention of people solely because of an inability to pay.

“It would be a horrible mistake if our Legislature decides that we should let loose defendants before trial, and remove an effective way to ensure their return to court to face charges, for a misguided notion that the bail system is unfair,” wrote former ADDA president Marc Debbaudt, of the issue, according to the study.

Current ADDA president Michelle Hannasee has also led the organization in active lobbying, such as the ADDA’s opposition to SB 1391, which prevented prosecutors from transferring 14- and 15-year-olds to adult court.

So what are we to make of all of this?

Here’s what the study’s authors have to say: