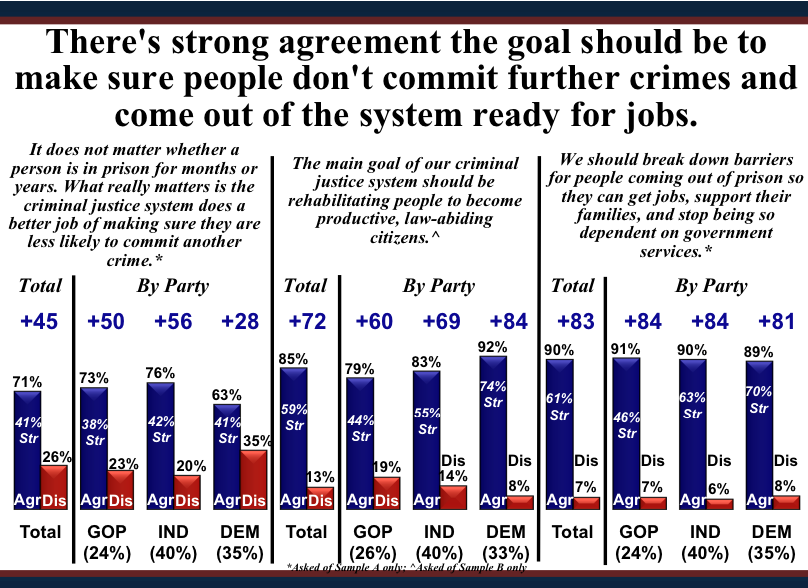 Eighty-five percent of voters believe that rehabilitation, rather than punishment, should be the goal of the criminal justice system in America, according to a new poll conducted by Public Opinion Strategies on behalf of Justice Action Network.

Republicans (79%), Independents (83%), and Democrats (92%) agree
that the criminal justice system should focus on rehabilitation rather than punishment.

Three-fourths of Americans believe that the criminal justice system is in need of significant improvements, according to the polling results.

The overwhelmingly pro-reform poll results come at a time when U.S. Attorney General Jeff Sessions is rolling out outdated tough-on-crime policies, ordering federal prosecutors to seek the longest sentences possible for drug offenses, and vowing to crack down on states that have legalized marijuana.

“With these eye-popping numbers, I’m hopeful Washington may finally get on the same page as the American voters,” says Holly Harris, Executive Director of the Justice Action Network. “Our federal prison population has exploded over the past few decades — especially the population of incarcerated women.”

Harris pointed out that states, even those that are overwhelmingly Republican, are pushing through important criminal justice reforms with tangible results. “But for some reason, there has been a disconnect between Washington and what’s happening in federal lawmakers’ backyards,” Harris says.

Of those polled, 87 percent of Americans believe a portion of the money spent incarcerating people for nonviolent offenses should be diverted into community supervision (probation and electronic monitoring) and community service. Again, Republicans (80 percent), Independents (90 percent) and Democrats (90 percent) were in agreement on the issue. Eighty-seven percent of women polled in favor of spending money on alternatives to incarceration.

And 85 percent of those polled support getting rid of the current cash bail system in favor of pre-trial community supervision.

Ninety percent of respondents say the U.S. should get rid of barriers to success for people reentering their communities after incarceration “so that they can get jobs, support their families, and stop being so dependent on government services.”

And 79 percent say that after probation, youth under the age of 25 who are first-time, low-level offenders should have the ability to expunge their conviction.

Eighty-seven percent of voters believe that people accused of non-violent crimes should not face mandatory minimum sentences. Rather, judges should have more discretion in sentencing.

A full 90 percent of respondents say that prisons should provide basic hygiene products to incarcerated women for free. And 86 percent of voters agree that incarcerated pregnant women should not be shacked or handcuffed while they are in labor.

While there are things that Republicans and Democrats will disagree on, “when it comes down to the fundamentals of human worth, human dignity, human value and worth, this is not a partisan issue,” says Representative Doug Collins (R-GA). “For me, this is about stewardship. It’s about stewardship of financial resources but also of the infinite worth of people.”

Collins and Representative Hakeem Jeffries (D-NY) have co-sponsored the Prison Reform and Redemption Act, which would force the Attorney General to implement a post-sentencing risk and needs assessment. Additionally, the federal Bureau of Prisons would be required to develop programs to reduce recidivism among prisoners.

Lawmakers on both sides of the aisle “all agree that it’s time to do something about over-criminalization in America and fix our broken criminal justice system,” says Hakeem. “We have been heartened by the interest the White House has shown in trying to get something done on this issue. I look forward to continuing the work with Congressman Collins and all the advocates to get this legislation over the finish line.”