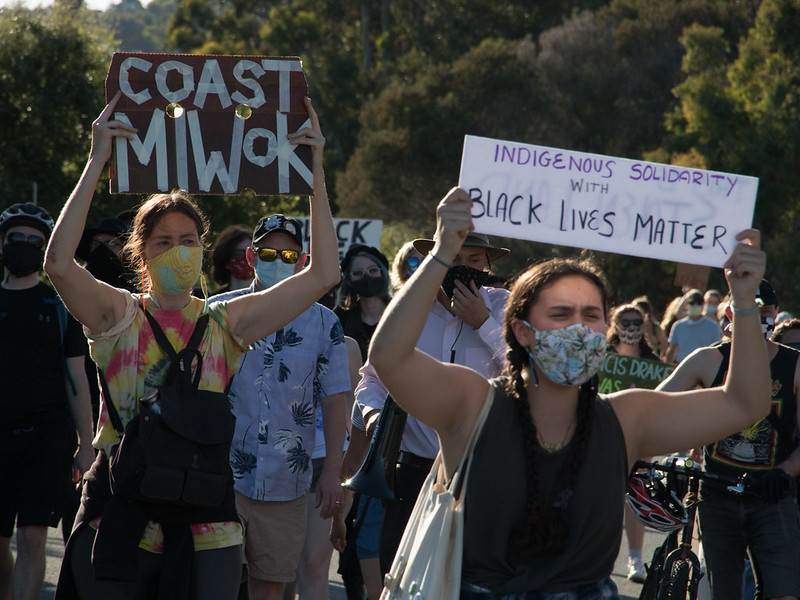 America’s indigenous people are “consistently affected,” by the criminal justice system, “yet continuously excluded from broad public discourse” about race and justice, according to a report from the Lakota People’s Law Project.

Native Americans, the report says, face incredible discrimination in the justice system. For example, while Native youth comprise just one percent of the nation’s total youth population, they make up 70 percent of kids admitted to federal prisons. Native kids are often criminalized for low-level status offenses, many of which involve alcohol possession and consumption.

The report points to data from 2009 that revealed Native American men were admitted to prison at four times the rate of white men, and that Native women were imprisoned at six times the rate of their white counterparts.

On any given day, 4 percent (or 1 out of every 25) Native Americans adults is involved in the criminal justice system.

Additionally, Native Americans are more likely to be killed during encounters with law enforcement than any other racial group proportional to their overall population, Mike Males, of the Center on Juvenile and Criminal Justice highlighted in a 2014 report.

Using data from the Centers for Disease Control and Prevention, Males found that from 1999 through 2011, Native law enforcement officers killed 4,531 people, 96 percent by firearms and 96 percent of them men. While Native Americans comprised just .8 percent of the population, they made up 1.9 percent of police killings. (Police in the U.S. killed a far higher number of members of other racial groups, but not at rates more than twice their overall population percentage, as was the case with indigenous people.)

While these studies may seem a bit old, data collection and research surrounding how indigenous people experience the criminal justice system — including data surrounding the epidemic of violence against Native women, most of which is committed by non-Native people — has been appallingly scant.

Bureau of Justice Statistics data shows that indigenous people are violently victimized at more than twice the rate of the general U.S. population.

An incredible 84 percent of Native women have experienced violence, according to a study funded by the National Institute of Justice.

And 88 percent of all violent crimes against Native women were committed by non-Native individuals.

A 2018 report conducted by the Seattle-based Urban Indian Health Institute looked at hundreds of cases of missing and murdered native women in urban areas (not on federally defined tribal lands) over the last decade, and going back as far as the 1940s.

And in the course of its research, the UIHI team struggled to collect relevant data, scouring multiple missing persons databases, news and social media sites, speaking with members of Native American communities, and filing public records requests to law enforcement agencies. Of the 71 city police agencies from which UIHI requested data, a startling 59 percent of departments either failed to provide any data at all or provided “partial data with significant compromises,” according to the report. Some agencies only agreed to confirm cases that UIHI had already found, or shared what they could, from memory.

According to the National Crime Information Center, there were 5,712 reports of missing American Indian and Alaska Native women and girls in 2016, on and off federally recognized tribal land. By contrast, NamUs, the U.S. Department of Justice’s missing persons database, logged just such 116 cases.

While Native individuals and groups have had a strong presence at rallies in support of Black Lives Matter in recent weeks, “local organizing must continue in our community,” the Lakota People’s Law Project writes. “We must speak in unison, explicitly to these issues.”

Additionally, the federal government must “begin reallocating resources directly to the tribes,” the report says. “The tribes must begin to manage their own child and family service programs, their own juvenile detention facilities, and also healing programs. The continual support of Tribal Title IV-E programs and court training will provide an opportunity for this type of development to occur, and should be encouraged by all necessary Federal agencies, including the Department of Justice and Health and Human Services.”