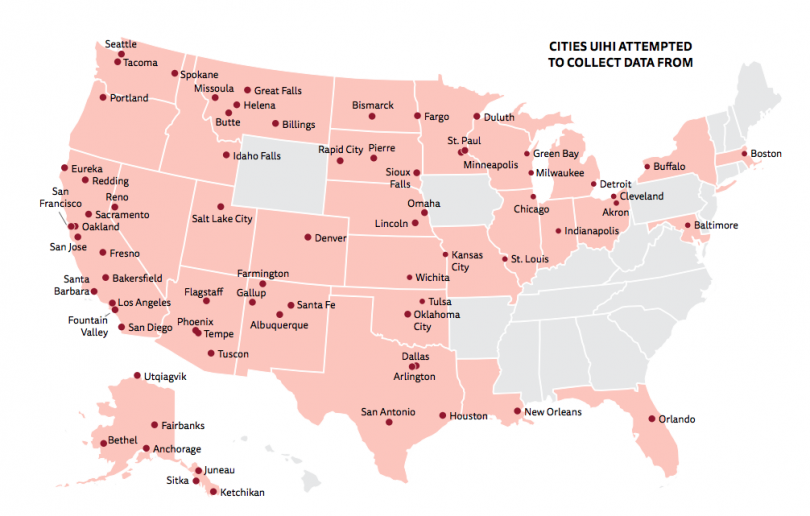 A new report aims to shine a light on the nation’s woefully inadequate data on missing and murdered Native American and Alaska Native women and girls, and the role that law enforcement agencies and media outlets play when it comes to letting this population slip through the cracks.

The study, conducted by the Seattle-based Urban Indian Health Institute, looks specifically at 506 cases of missing or murdered “urban Indian” women and girls in 71 cities across 29 states dating back to 1943. While the cases date back to the mid 20th Century, two-thirds of the cases land between 2010 and 2018. (The study did not look at cases on reservations and other federally defined tribal lands.)

Most of the nation’s Native Americans–around 71 percent–live in urban areas, rather than on federally designated tribal lands, according to the report. And of the women and girls involved in the cases UIHI tracked, 75 percent had no tribal affiliation.

Because there has historically been so little government data collection in this area and little media attention on the issue, the Urban Indian Health Institute believes the actual number of missing and murdered Native American women in urban areas is far higher.

According to the National Crime Information Center, there were 5,712 reports of missing American Indian and Alaska Native women and girls in 2016. By contrast, NamUs, the US Department of Justice’s missing persons database, logged just 116 cases.

And in the course of its research, the UIHI team struggled to collect relevant data, scouring multiple missing persons databases, news and social media sites, speaking with members of Native American communities, and filing public records requests to law enforcement agencies. Of the 71 city police agencies from which UIHI requested data, a startling 59 percent of departments either failed to provide any data at all or provided “partial data with significant compromises,” according to the report. Some agencies only agreed to confirm cases that UIHI had already found, or shared what they could, from memory.

“It is unacceptable that law enforcement feel recalling data from memory is an adequate response to a records request. In the one instance where this occurred and the officer searched their records after, several additional cases the officer could not recall were found,” says Dr. Annita Lucchesi. “This highlights the need for improved records provision standards and shows that the institutional memory of law enforcement is not a reliable or accurate data source.”

Some agencies, including the Los Angeles Police Department, reported severe FOIA request backlogs, preventing them from complying with UIHI’s requests.

At the same time, some agencies, including the Anchorage and Lincoln police departments, responded promptly with case data, demonstrating, according to UIHI, that “the barriers other agencies have identified are not inherent to law enforcement as a whole.”

“Institutional practices…allow [indigenous women and girls] to disappear not once, but three times—in life, in the media, and in the data,” UIHI says.

Seattle had the highest number of missing and/or murdered indigenous women and girls with 45 cases, followed by Albuquerque, where 37 cases were identified.

UIHI found cases in 13 cities in California, a state that is home to 109 reservations. California had a total of 40 cases–the sixth highest of the 29 states studied. A total of 17 of California’s cases were in San Francisco–the tenth highest total among the 71 cities.

Last week, the U.S. Senate Committee on Indian Affairs voted to advance Savanna’s Act, a bill aimed at addressing the national crisis of missing and murdered indigenous women and girls.

In October 2017, U.S. Senator Heidi Heitkamp introduced Savanna’s Act, dedicating the bill to Savanna LaFontaine-Greywind, a member of the Spirit Lake Tribe, whose disappearance and death—caused by “homicidal violence,” according to police—were far too common among Native American women.

Eight days after she vanished on August 19, 22-year-old LaFontaine-Greywind’s body was found by kayakers in the Red River near Fargo, ND. She was eight months pregnant.

The bill would improve tribal leaders’ access to federal crime databases, as well as create protocols for the federal government’s response to cases involving missing and murdered Native people, and work to improve cooperation between tribal, federal, state, and local law enforcement officers.

According to Heitcamp, who previously served as North Dakota’s Attorney General, jurisdictional problems create unnecessary roadblocks “to responding to and prosecuting crimes committed on Tribal lands.” But, Heitcamp said, “the complexity of jurisdiction” is “not an excuse” for hampering an investigation.

Additionally, Savanna’s Act would require the DOJ to present a report of statistics on missing and killed Native women to be presented to Congress, with recommendations regarding ways to better gather data.

“Until there is cooperation and better tracking systems at all government levels, the data on missing and murdered Indigenous women will never be 100 percent accurate, which is what we need to strive for in order to protect our mothers, daughters, sisters, and aunties,” says Abigail Echo-Hawk Director of the Urban Indian Health Institute, and a member of the Pawnee Nation.