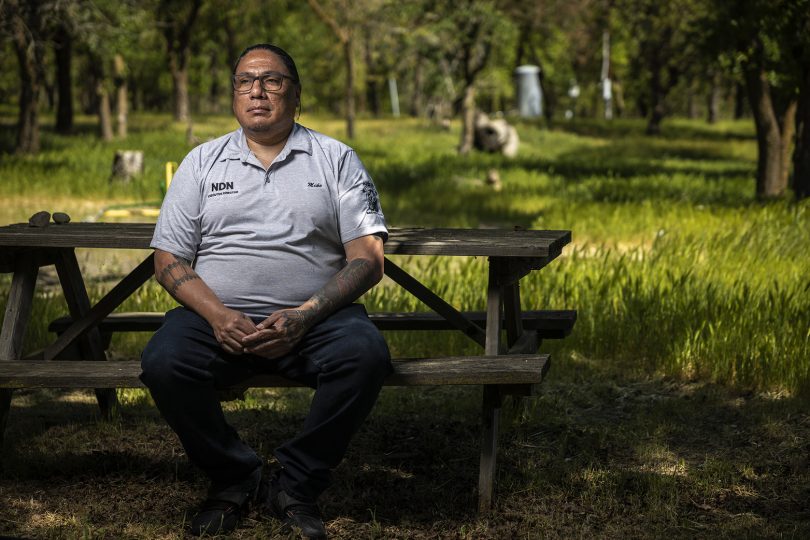 “Tradition and culture are really at the core of who we are.  It’s how we heal.”

For much of his early adulthood, Mike Duncan, a member of the Round Valley Indian Tribes in Mendocino County, wrestled with unhealthy ideas about masculinity that devalued women and child-rearing. Among Duncan’s chief regrets from that time are how he behaved toward the mother of his oldest children, and the negative example he presented to his kids.

“I was … trying to be right, trying to be masculine, you know, ‘I’m the man, listen to me,’ type of mentality,” says Duncan, speaking during an online workshop on parenting he’s held regularly during the pandemic. “It was all just part of the sickness, the belief system that I grew up with.”

For many years, Duncan cycled in and out of jail and battled with alcoholism, neglecting his health and abandoning his responsibilities of fatherhood. Now 14 years sober, he is trying to change that belief system he sees infiltrating Native American communities like the one he grew up in in Sacramento.  Duncan believes his old attitudes contributed to substance abuse and domestic violence.

This misogynist belief system didn’t originate in Native American cultures, he says.  It arose from centuries of colonialism and the trauma that history continues to cause.

Unhealthy cultural norms for male behavior, often referred to as toxic masculinity, are widespread. In a recent statewide survey by the Blue Shield of California Foundation of almost 2,000 Californians from a variety of racial and ethnic backgrounds, a majority of respondents said they felt “our” culture pressures men to conform to gender norms such as being aggressively competitive and dominating or being in charge of others.  By our culture, some respondents appeared to be referring to mainstream white culture.  Others, referred to a variety of other cultures of origin.

Yet, Duncan describes a pattern of toxic behavior that was overlaid on Indigenous culture in combination with multigenerational trauma.

Duncan is founder of Native Dads Network, a Sacramento-based nonprofit that runs workshops on healthy parenting and relationships throughout Northern California, primarily for Native Americans. The workshops draw on traditional Indigenous teachings and cultural practices about the value of life, the role of parents and the sacredness of women. The network is one of a growing number of programs across the state that seek to address high rates of domestic violence and family dysfunction in many Tribal communities by using Native American people’s own traditions and history as a guide. 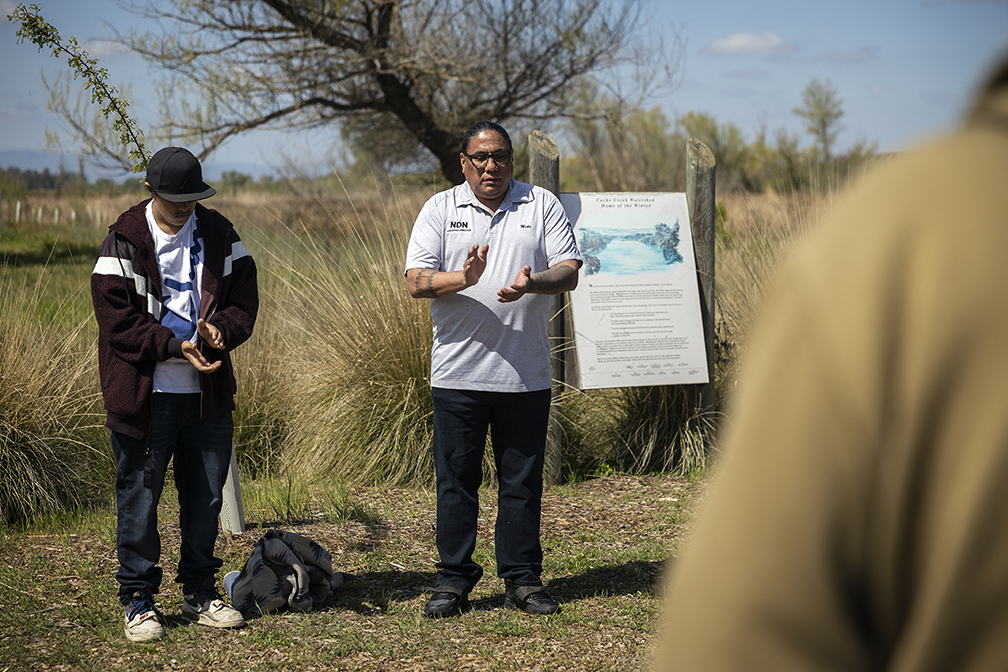 Mike Duncan and his son Sisario perform a traditional song at the Cache Creek Conservancy in Woodland, CA. The conservancy is located within the ancestral territory of Duncan’s Wintun forebears. Photo by Martin do Nascimento / Resolve Magazine

Colonization and historical trauma “is what contributed to our mental health issues, substance abuse issues, domestic violence in our families,” explains Dr. Carrie Johnson, a clinical psychologist who oversees a program for survivors of domestic violence at United American Indian Involvement, a behavioral health and social service provider for Native Americans and Alaska Natives living in Los Angeles. “That has really torn apart who we are.”

Inter-partner violence is also high for Native men, although they are less likely than their female counterparts to experience physical and sexual abuse. In some areas of the U.S., Native women also face murder rates more than 10 times the national average

In many cases this violence is perpetrated by non-native people, a problem that has garnered increased attention in recent years as tribes seek greater authority to prosecute such crimes. Yet, poverty, isolation and high rates of substance abuse and mental distress — all byproducts of colonization — likely also contribute to the prevalence of domestic violence in Native American communities, research shows.

Native Americans have a long history of trauma, including conquest,  genocide, displacement, and the forced removal of children from their families for placement in boarding schools between 1860 and 1978, where many report they were physically and sexually abused. The boarding schools also stripped Native children of their cultural identities and the opportunity to learn healthy parenting skills, Johnson says. Some of the domestic violence survivors her agency serves have parents or grandparents who were in boarding schools. Many experienced abuse as children and grew up thinking violent relationships were normal. 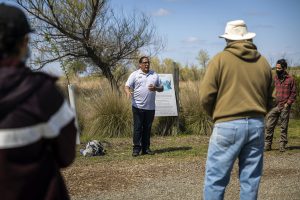 Mike Duncan speaks to a group at the Cache Creek Conservancy in Woodland, CA. photo by Martin do Nascimento / Resolve Magazine

Over the past five years, Johnson’s program has been offering domestic violence survivors paths to healing that incorporate Native American cultural practices and beliefs into programs. The organization runs beading, dancing and drumming classes, and informs survivors about how Native societies traditionally respected women as sacred, life givers connected to Mother Earth. Many tribes were also matrilineal, tracing their member’s lineage through mothers rather than fathers.

Although traditions vary by tribe, the underlying philosophies are often similar, Johnson says. In urban areas like Los Angeles, many Native American residents are disconnected from their tribes of origin and welcome the opportunity to engage in Native American traditions, even if not specific to their own ancestry.
The practices empower survivors, says Johnson, giving them “much more strength to get out of those [violent] relationships.”

At Native Dads Network, Duncan focuses on Indigenous traditions as he speaks with both men and women working to overcome addiction, improve their relationships, and become better parents. He encourages participants to learn more about their own tribes and to connect with their roots through prayer and ceremony. He also discusses the impact of historical violence, intergenerational abuse, and colonial attitudes toward women to help participants better understand the origins of some of their challenges.

“We have to take responsibility for our behavior, but you have to understand that’s not who we are, it came from somewhere,” Duncan says. “If we change our beliefs, we get different results. And it’s not really changing our beliefs, it’s re-understanding our [traditional] beliefs.”

Duncan’s Native Dads Network classes are based on curricula created by Albert Pooley, founder of the Arizona-based non-profit Native American Fatherhood and Families Association. Pooley’s approach focuses on seeing fatherhood and motherhood as sacred and strengthening relationships between generations. Pooley, a marriage and family counselor born to Hopi and Navajo parents, says his curricula don’t espouse any specific religion or tribal tradition. Instead, they incorporate universal Native American principals such as the presence of a Creator, the importance of prayer, and the notion of sanctity. He said he created them after realizing that many Indigenous people he’s worked with didn’t connect with standard therapeutic approaches.

Pooley’s programs have generated interest from tribal communities and professionals working with Native Americans across the country, including mental health practitioners, child welfare agencies, schools and county jails. More than 370 people have been trained as facilitators in California alone.

Meanwhile, in Northern California the Yurok Tribe has developed its own culturally rooted 52-week intervention program for perpetrators of domestic violence.  Called Skuy-ech-son, or “to heal oneself,” the program is open to both Native and non-Native people in Del Norte County, which had the highest rate of domestic violence in the state, in 2018, the latest year data is available. Most participants are referred by a judge. 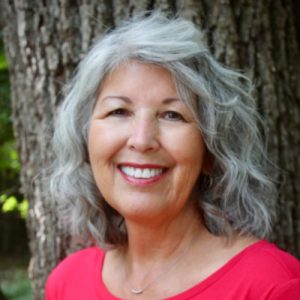 Lori Nesbitt, a Yurok tribal probation officer and program facilitator, said many of the perpetrators have faced poverty, a lack of access to education, and behavioral health challenges. The program works to help them recognize where they went wrong, and to build a more positive identity and connection with those around them.

Activities draw on foundational principles in Yurok society — the importance of family, cultural traditions and elders. Participants are encouraged to create a family tree and talk about family members or others in their communities who are important to them. They’re also asked to learn about their own cultural heritage, values and traditions, whether those are Yurok, Irish or from another culture, and to share them with the class. Another activity involves interviewing an elder about their relationship experiences, and how they resolve conflicts.

“We work on making them feel like they belong,” Nesbitt says.

Nationally, the StrongHearts Native Helpline provides culturally sensitive support to Native American and Alaska Native survivors of domestic, sexual and dating violence. The hotline launched in 2017 after staff at the National Domestic Violence Hotline, a general helpline for domestic violence survivors, realized they received very few calls from Native Americans, and that a more culturally responsive helpline was necessary. Although the StrongHearts helpline is based in Minnesota, its highest call volume is from California, said director Lori Jump. About 1 in 8 callers to the helpline are from California.

StrongHearts Native Helpline operators identify as Native American or Alaska Native themselves, and understand Native cultures, historical trauma and issues facing Native survivors seeking justice on tribal lands. In addition to connecting survivors to resources, they can talk about ways to take care of themselves through healing practices at home or through community ceremonies.

“Tradition and culture are really at the core of who we are,” says Lori Jump, the helpline’s director.

“These spiritual practices help us to mend our spirits. … At the end of the day, not only do we want people to be safe, but we want them to heal.”

Anyone experiencing domestic violence can call the  StrongHearts Native Helpline at 1-844-7NATIVE (1-844-762-8483). Operators are available daily between 5 a.m. and 8 p.m. and will also respond to messages left after hours.

Photo at top is of Mike Duncan, founder of Native Dads Network, a nonprofit focused on promoting healthy parenting and relationships for Native Americans is photographed at the Cache Creek Conservancy in Woodland, CA. The conservancy is located within the ancestral territory of Duncan’s Wintun forebears. Photo by Martin do Nascimento / Resolve Magazine. 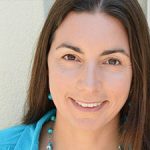 This story was produced in partnership with the California Health Report.