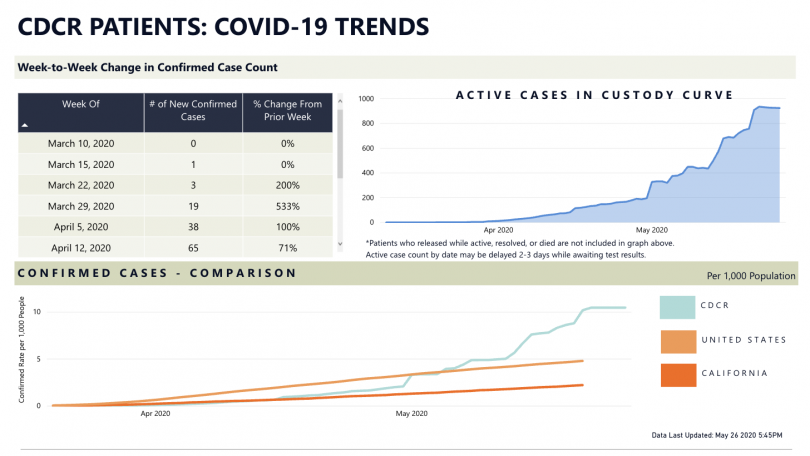 Since mid-March, California prison officials have struggled to gain access to coronavirus testing supplies that would allow the prison health department to test more widely in at least a few of its 35 facilities, particularly those with higher numbers of staff members reporting positive COVID-19 results.

Over the past couple of weeks, however, the California Department of Corrections and Rehabilitation’s testing capacity has expanded significantly. Between May 11 – 23, California Correctional Health Care Services tested 7,597 people for the virus, bringing the total number of administered tests to 11,797, which lands at just under 10 percent of the state’s custody population.

This expanded testing has revealed new outbreaks in several facilities that, before testing, appeared to have no more than a handful of positive cases, if any at all.

And, in the case of the Chino-located, California Institution for Men (CIM), which was already experiencing a fast-rising outbreak even before the recent expansion of testing, wider testing blew the infection rate through the roof.

Now, as of May 26, out of CIM’s 3,317 prisoners (as of the latest count), 635 people, or close to 20 percent of residents, have tested positive. Those numbers continue to rise daily.

In the past few weeks, 161 of those men have reportedly recovered from the virus, and nine have been released with active coronavirus infections, leaving 456 active cases among CIM’s custody population.

Since April 16, nine of the positive-testing people have died after falling ill inside the prison. The death number hovered at five for a while, before a sixth person died earlier this month. Then, suddenly, over the weekend of May 23 – 24, three more died.

Many more remain in outside hospitals receiving treatment for complications stemming from coronavirus.

CDCR officials say that hospitalization numbers are not being released to the public. A May 20 filing in federal court put the total hospitalization count at 32, of which 27 were from CIM.

Both staff members and those living inside the prison expect infection rates to shoot much higher.

In addition to residents, CIM also has the highest number of staff members who have gotten the virus, with a total 58 staff members testing positive, 39 of whom have returned to work as of May 26.

Those tracking CDCR COVID-19 stats online watched CIM’s staff infection number tick up at a much slower pace than that of prisoners. Staff members must obtain testing in their communities, and then self-report positive results to their employer.

“Offering staff testing, even if voluntary,” said CDCR Press Secretary Dana Simas, “would require a collective bargaining process with all impacted labor unions to determine when, where, ensuring equal access to testing across all shifts, and determining how test results would be used by the department.”

In other words, although nearly all of CIM’s inmates have now been tested for coronavirus, it’s unknown what percentage of staff members have been tested.

“CDCR, in coordination with the Federal Receiver and local county departments of public health have successfully secured the capability to implement emergency mandatory testing for all employees at both California Institution for Men and Avenal State Prison,” Simas told WLA on Wednesday. “We are still actively working to develop the capability at other institutions statewide.”

One woman whom we’ll call Deborah, as she asked to remain anonymous to protect her boyfriend in CIM, told WLA that “from the looks of it, [the CDCR] isn’t having a problem distancing employees and keeping them safe.”

Yet the department “can’t seem to figure out how to keep the men safe. It’s inhumane.”

Another woman — we’ll call her Elena — told us most of the corrections officers at Soledad State Prison, where her husband is incarcerated, “want the same thing” that prisoners and their families want.

“They do not want to be working in these conditions.”

As of the latest count on May 26, 262 corrections workers have reported positive coronavirus results to the CDCR. So far, 135 of those people have recovered from the illness and have returned to work.

While CIM, and California State Prison, Los Angeles County (LAC), located in Lancaster, have been battling outbreaks since March, the California Institution for Women (CIW), and Chuckawalla Valley State Prison (CVSP) have each seen a significant number of new positive test results among their custody populations.

Then, in an alarming demonstration of how fast COVID-19 can move once the viral match is lit, over the past week, Avenal State Prison (ASP) in rural King County, which was barely on virus watchers’ radar, suddenly had 198 people receive COVID-positive results. Of the 457 tested, then, Avenal has an infection rate of 43 percent. We won’t know the full data story, however, until the CDCR can test the rest of the prison’s 4,170 residents.

A handful of other prisons are seeing the first stages of potential outbreak, with infections in the single digits, at least for now.

The CDCR struggled for months to get enough tests for the prison system, and was forced to make decisions without the critical knowledge of where outbreaks were occurring, said attorney Michael Bien, of Rosen Bien Galvan & Grunfeld. (RBGG and the Prison Law Office have spent the past two months working to get federal judges to order the state to reduce prison populations, much of which consist of elderly and medically vulnerable people, amid the coronavirus pandemic.)

Now, that the CDCR has tested more than 7,000 people in May (out of the 11,744 tested overall), and expects to get 18,000 tests per month moving forward, health care workers can shine a light on previously undetected outbreaks like those at Avenal and CIW, where high rates of asymptomatic cases might otherwise hide a spreading disease.

In Ohio, for example, state leaders tested everyone in the Marion Correctional Institution in April, and found an infection rate that topped 80 percent. And 96 percent of those positive cases were asymptomatic. The silent spread of symptom-free infections had fatal consequences. By May 25, 66 Ohio prisoners had died of the virus.

More than 35,000 prisoners are currently in quarantine in Ohio, out of a statewide population of approximately 49,000.

In response to the spike in positive tests inside CIW, the CDCR put the entire population into quarantine, and said it would move those who had tested positive for the virus into a housing area that has sat empty.

In response to the outbreak at ASP, the CDCR said it was “following isolation and quarantine guidance from public health experts.”

Last week, a source told WitnessLA that Corcoran State Prison had also been placed under quarantine, indicating that the infection numbers — then officially at zero — might also be headed toward an outbreak. As of Friday, May 22, Corcoran had two staff members testing positive for COVID-19.

The rest of the nearly three dozen prisons across the state, still potentially face their own uphill battles against the virus.

Part of the problem is that most of CA’s long-overcrowded facilities are still stuffed beyond capacity, creating an environment in which any staff member or prison resident who has the virus is likely to get a few others sick, followed by the exponential doubling and redoubling of infection that has created crises in nursing homes, shelters, and other congregate care settings across the nation.

It doesn’t help that last Monday, the CDCR announced that it would resume taking prisoners from the more than 100 jails across the state. This process had been paused since March, on Governor Gavin Newsom’s orders. Rosen Bien Galvan and Grunfeld argue that it’s not yet safe to restart prison intakes, and that they shouldn’t occur “until it is established that there is adequate space to safely house the additional people.”

Ohio, too, the nation’s capital of prison deaths, announced last week that it would reopen its prisons to new transfers from jail, a move that brought sharp criticism from advocates.

Too few early releases to make a difference

As California now gears up to allow new entries into the already overcrowded prison system, state leaders continue to foot-drag with regard to any measures that would reduce the prison population in any meaningful way, according to attorneys and advocates.

On March 31, prison officials identified 3,500 people, who were already within 60 days of scheduled release, to receive expedited early parole in light of the pandemic. All of those the CDCR ultimately considered eligible for release — “more than 3,400” — were in fact freed from prison by April 13, according to the department.

Since then, however, state officials have done little to reduce the prison population.

The families of incarcerated Californians, their attorneys, and advocates say state leaders should have released far more than a few thousand people. As prison residents began to fall ill and die, one by one, cries for ramped up releases became more urgent.

“We think there are tremendous numbers of persons incarcerated in California prisons” Bien said, “who are safe and appropriate for release.”

State leaders, Bien told WLA, should have kept the process rolling, and even released people further out from the end of their sentences. Why not release people 90 and 120 days out from their scheduled release, Bien said. How different is that from 30 and 60 days?

Additionally, for weeks, the state has had a list of elderly and otherwise vulnerable prisoners for whom early release or even furlough could be a life-saving gift.

This month, WitnessLA has talked to wives, girlfriends, and mothers of incarcerated men, who described their fear for loved ones with underlying medical conditions, who are less than 6 months away from getting out of prison and coming home.

For now, prisoners and their families are kept waiting, hoping the virus won’t bring tragedy to their doorstep.

“It’s hell,” having the husband and father of your children in prison during a pandemic, a Southern California woman we’ll call Laura told WLA.

“I feel helpless,” she said, choking up over the phone.

Laura’s husband, in Corcoran State Prison for a felony DUI with priors, has a scheduled release date in July. But, in the time between July and now, Laura is worried that his health — high blood pressure, kidney disease, Hepatitis C, and other immune system troubles — put him gravely at risk if he contracts coronavirus.

“I understand picking and choosing” who is eligible for early release, she said. “No violence, nobody that doesn’t have a home” or somewhere to stay.

“But there are a lot of guys like my husband that are reformed. They just made some stupid choices,” said Laura. And they’ve paid for them. “My husband is a grandfather now. We have a daughter together.”

While out on bail for two years and waiting for his DUI case to be settled, her husband had gotten sober again, and was helping her to take care of her aging parents, while working two jobs, Laura said.

“My dad’s a Vietnam vet, and he’s in a diaper right now from a stroke.”

Laura’s family’s story is one that WLA has heard, with small variations, from many of the men and women we’ve talked to over the last month.

Calls for more releases, and where those releases could come from

Michael Bien told WLA that early releases could come from several different directions, including from the CDCR, from J. Clark Kelso — the longtime federal receiver appointed to oversee the quality of health care throughout the prison system — and from Governor Newsom.

There are “literally thousands” of clemency petitions sitting on Newsom’s desk, Bien said. “Some of them have been there since Governor Brown left them there.”

While the governor has reviewed and granted some clemency petitions, he has not increased output during the pandemic. “Other governors have used the commutation and clemency process as a way of decreasing population during the COVID-19 crisis,” Bien said.

“I totally understand” that Governor Newsom “doesn’t want to release violent criminals” or overload our streets with homeless people, Laura said. But she doesn’t get it, she said, why the state can’t weed through those, without only a few months left, that have a stable home waiting for them on the outside.”

This story was updated to include new information on staff testing.