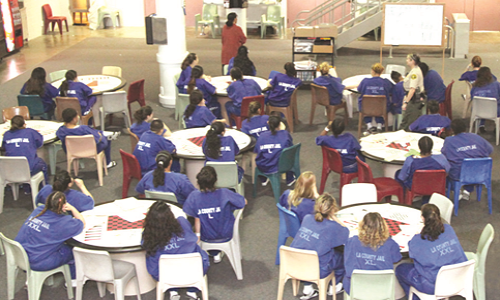 As the firing of CBS chief executive Les Moonves in the wake of  another round assault and harassment claims continues to make national headlines, in another part of Los Angeles, a new lawsuit filed recently by two women made similar accusations against a Los Angeles County Sheriff’s deputy named Giancarlo Scotti, alleging he sexually harassed, abused, and assaulted female inmates whom it was his duty to protect in the Century Regional Detention Facility (CRDF) women’s jail located in Lynwood, California.

The lawsuit filed in federal court on Friday, August 31, is the third of its kind, raising the total number of women suing Scotti for sexual misconduct to five, each of the alleged victims former inmates at CRDF, where until September of last year, Scotti was working .

In addition to the three civil lawsuits, in February of this year, Scotti was criminally charged with sexually assaulting six female inmates at the Lynwood facility, with the alleged abuse said to have occurred between March and September of 2017.

It’s not clear if  some of the five women who have filed lawsuits against the deputy are among the female inmates that Scotti is already criminally charged with having assaulted, in that the women referenced in the criminal charges are not named.

Yet, however much or little the women in the lawsuits cross over, with the women connected with the criminal case against Scotti, some of the dates referenced in this latest court filing bring up troubling questions that go beyond the accusations of abuse, intimidation, and assault previously raised by the other three women who filed the earlier two lawsuits.

According to the new complaint, one of the two new women was allegedly assaulted on or about November 25, 2016, and a second time, on or about December 2, 2016—dates that greatly expand the time period in which Scotti may have been sexually preying on women.

This woman—whom we’ll call Jane 5—told of first a sexual assault where she was allegedly ordered to disrobe by Deputy Scotti on November 25, 2016. Then a week  later, according to Jane 5, Scotti approached her in the jail’s laundry room and told that he wanted to “fuck,” then allegedly ordered her to follow him into the staff elevator, where he “forcibly grabbed her breast,” then stopped the reported assault and told her to return to her cell.

According to the complaint, it turned out that the staff elevator was under video surveillance, but we’ll get back to that in a minute.

Jane 5 was released from jail on December 9, 2016, and had no more direct contact with Scotti. Shortly after her release, however, according to the complaint, Deputy Scotti contacted Jane 5 on social media with the message, “do you want to fuck.” Jane 5  didn’t respond.

Also, sometime after her release, according to the complaint, a Sergeant Bernal of the LASD contacted Jane 5’s mother and said that he wanted to speak to Jane about the assaults. Jane met with department personnel and told them about what she experienced. According to the complaint, during a meeting with LASD officials they showed her video footage of the alleged assault by Scotti in the staff elevator.

The matter of dates

Right now, the attorneys representing these latest two women don’t know with any certainty on what date Jane 5 first met with LASD personnel, and precisely when it was that they showed her the video of her assault.

Those dates would be important.

Yet, the November-December 2016 dates of Jane 5’s alleged abuse took place three months earlier than the first dates referenced in the criminal charges, and at least seven months before the dates of the incidents claimed by the other four women who filed the three lawsuits.

Furthermore, as mentioned above, there was reportedly a video of Jane 5’s alleged Dec. 2 assault, which Jane 5 says she was shown at one of her meetings with LASD investigators.

So when did LASD officials know about the allegations of sexual abuse made by Jane 5 against Scotti?  And when did they see the staff elevator video, presuming the  complaint is correct, and there was staff elevator video showing Jane 5 being assaulted by Deputy Scotti on December 2, 2016.

All five of the women in the three federal lawsuits are represented by attorneys Justin Sterling and Erin Darling.  And all five allege that before the various plaintiffs were”sexually assaulted by Deputy Scotti,” the deputy had sexually assaulted other
female inmates at CRDF and that the County, the LASD and Sheriff Jim McDonnell “were on notice of this conduct.”

The complaints also allege that Scotti had been “put on employment probation by the county” before the sexually assaults alleged in the complaint, but that he was nevertheless still allowed “to work at a women’s jail, permitting him the regular, daily task of supervising women inmates.”

Thus far, we only know for sure that Scotti was put on administrative leave without pay in mid-September of 2017, when he was initially arrested for assaulting two women and charged with two counts of rape and oral copulation under color of authority.

But when did LASD investigators first have evidence of Scotti’s predatory actions? If they talked to Jane 5 sometime between December 2016 when she was released and March 2017 when the first of the assaults for which he was criminally charged allegedly occurred, while was he still working with female inmates until mid-September 2017?

Attorneys Sterling and Darling say they cannot yet comment on the details of the new lawsuit.

But Darling did point to what he called “the tragedy” of Deputy Scotti’s alleged actions, which he said represent “failure on an institutional level” at the Los Angeles County Sheriff’s Department that, in turn, calls for “aggressive litigation.”

Department spokeswoman Nicole Nishida said the LASD would “reserved comment on pending litigation,” but that Deputy Scotti is still on administrative leave without pay.

So we are left with three legal complaints (see below), which make for unsettling reading.  Some of the women’s accounts include allegations of retaliation when they attempted to report the abuse.

In the case of the newest lawsuit, the second woman (let’s call her Jane 4) describes a campaign of sexual abuse by Scotti, and finally the demand to touch her bare breasts through a slot in her cell door, followed by the demand for “oral copulation,” to which she said she fearfully complied. (Jane 4 had reportedly been a victim of sexual assault as a 15-year-old, which increased her fear, according to the complaint.)

When Scotti was arrested a few days after the last alleged assault against her, Jane 4 “came forward” to an employee at the jail. This necessarily brought investigators into her cell for a search, which included the use of a blacklight. Now identified as one of Scotti’s alleged victims, rather than being protected, the lawsuit alleges she was instead left vulnerable to retaliation by certain deputies, and subjected to crass and demeaning sexual remarks of the “Don’t act like you didn’t like it” variety—and worse.

The legal complaints,  of course, contain only allegations, but those allegations are made more believable by the preliminary audit of the Lynwood women’s jail released last spring.  The audit looked at Prison Rape Elimination Act (PREA) compliance, and found that CRDF,  the largest women’s jail in the nation, failed to meet 41 out of 43 national PREA standards needed to keep women inmates safe from the threat of sexual assault.

The highly critical 138-page audit, completed in January 2018, (and first acquired by the LA Times’ Maya Lau) was requested by the LA County Sheriff’s Department to help the department get up to speed on the PREA requirements.

In part as a consequence of the disastrous scores in the audit, in May of this year, the LA County Board of Supervisors passed a motion to establish PREA Compliance Units within both the LA County Sheriff’s Department and the Probation Department. The motion also included a report-back on the feasibility of having the Office of Inspector General conduct PREA compliance audits of the county’s lockups.

This is all to the good, of course, but from what we hear, despite everyone’s best intentions, thus far progress in getting the PREA Units up and pro-actively running has been discouragingly slow.

This past April, when we were reporting on the failing scores reported by the PREA audit, we talked with Amanda Goad, a senior Staff attorney for the ACLU of Southern California, and an expert on such issues,  At that time, Goad said that both the audit, and the allegations made against  Deputy Scotti, suggest that a much larger PREA problem may exist below the surface in CRDF.

“We know,” Goad said, “both anecdotally from the conversations the ACLU staff have with folks in the jails in the course of our monitoring work, and also from broader studies of these issues, that the vast majority of people who do experience sexual victimization in jails never report it.”

And now we have more accusations, and still little in the way of concrete progress.

Post script: you can read the text of the five women’s three civil complaints for yourself by going here and here and here.