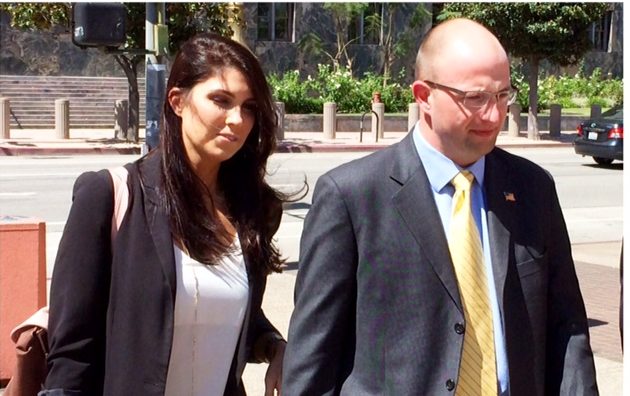 On Tuesday afternoon Los Angeles County Sheriff’s Deputy James Sexton was found guilty of obstruction of justice by a jury of seven women and five men.

The verdict was a surprisingly swift one. After closing arguments for the four-and-a-half-day trial, the jury left Judge Percy Anderson’s courtroom a few minutes after the noon hour Tuesday to begin deliberation, and returned with their decision at around 2:20 p.m. that same day.

Deputy Sexton—a former eagle scout with a West Point appointment who once interned for Vice President Joe Biden and was recently awarded a master’s degree at the University of Southern California—was 25 years-old and three years out of the sheriff’s academy when the events resulting in the charges against him took place in August and September of 2011. He received Tuesday’s news accompanied by his wife, brother, mother and father, plus a contingent of somber-faced LASD deputies, most of whom appeared to be close to Sexton in age.

Sexton’s father, Ted Sexton, a long-time former sheriff of Tuscaloosa County, Alabama, moved to Los Angeles in 2013 to work for Lee Baca and the LASD when the scandal-beleaguered Baca had fallen out with his once-close undersheriff, Paul Tanaka, and reportedly was desperate to hire someone whom he felt he could trust.

James Sexton is the seventh LASD sworn officer to be found guilty of obstruction of justice in connection with the FBI’s investigation into civil rights abuses by sheriff’s deputies inside LA County’s troubled jail system.

Specifically, Sexton was found guilty of obstruction of justice and conspiracy to obstruct justice because of his part in helping to hide federal informant Anthony Brown from his FBI handlers.

The trial that culminated Tuesday, was the second time that Deputy Sexton was tried for the same charges. His first go-round, which took place in May of this year, resulted in a hung jury, that split six-six.”

Paul Tanaka, who testified at both of Sexton’s trials and is running for sheriff, is believed to still be the subject of an ongoing criminal investigation by the FBI and the U.S. Attorney’s office.

When asked about the significance of Sexton’s conviction, government prosecutor Brandon Fox said that the verdict showed that, “…no matter if you’re low or high in the rank, if you commit a crime, the jury’s going to hold you liable for that crime. It’s not an excuse to say, ‘I was just this low level guy and other people told me to do this. And I didn’t exercise my own judgement.’

“I think something that all these convictions mean,” Fox said, is that its not okay to simply remain silent and to not disclose criminal acts that are going on. The thin blue line does not benefit anybody.”

Sexton, added Fox, confessed in his grand jury testimony to all the crimes of which he was charged.

“One of the differences between this trial and the first trial is that we provided evidence that Mr. Sexton is not a naive junior deputy.”

Of course, part of Sexton’s defense in his first trial had little to do with the following-orders-strategy, but pertained to the fact that he had reportedly cooperated with the FBI for over a year, meeting with federal representatives, either by phone or in person, at least 37 separate times. In this trial, however, most of the references to Sexton’s cooperation were prohibited.

As for those at the other end of the LASD chain of command, like Lee Baca and Paul Tanaka, who arguably issued the orders for whom the now-seven department members have been convicted, Fox declined to comment in any detail, but said he would welcome information from those to whom orders in question were given.

We will have more on that trial later this week.