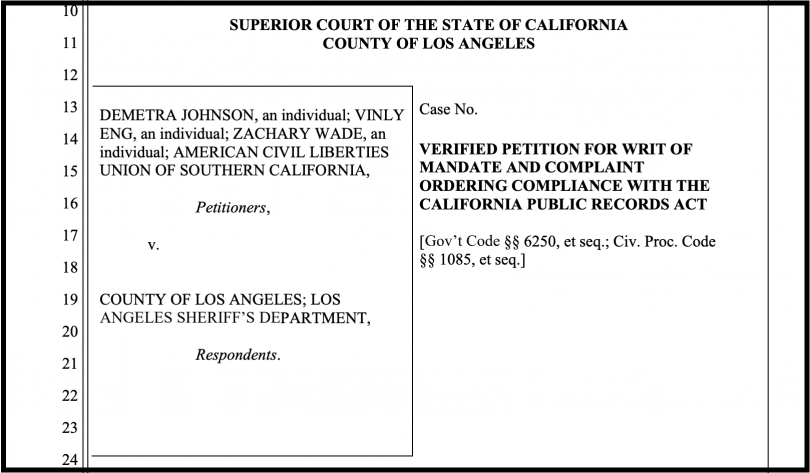 By refusing to release documents to the ACLU and to families seeking information after deputies used fatal force, the Los Angeles County Sheriff’s Department continues to violate SB 1421, California’s “Right to Know” police transparency law, according to a new lawsuit against the department.

The ACLU of Southern California and Munger, Tolles & Olson LLP filed the lawsuit in the Los Angeles Superior Court, on October 29, on behalf of the ACLU and three family members of people killed by LASD deputies. The sheriff’s department has denied these families’ requests for documents related to their loved ones’ deaths, as well as requests from the ACLU for records related to misconduct and shootings.

For those unfamiliar, starting on January 1, 2019, SB 1421 made records related to police misconduct and serious and fatal uses of force available to the media and the public via California Public Records Act requests.

SB 1421 grants the public access to personnel records of officers who are found to have been dishonest in the “reporting, investigation, or prosecution of a crime.” Until this year, even prosecutors have been barred from accessing personnel records that may impact their cases, even for officers with a history of lying in police reports or planting evidence.

Prior to January 2019, state law ensured that police personnel records remained private “without regard to the public interest in the records or any balancing inquiry,” the ACLU and Munger, Tolles & Olson said in their lawsuit.

Four decades ago, in 1978, California barred public access to this information, making it the most secretive state in the country when it came to law enforcement records. Prosecutors in CA have not even had the authority to access the records of officers found to have committed misconduct under the color of authority, including those records related to planting evidence or lying in police reports.

The secrecy surrounding police misconduct was supposed to have cracked open with the passage of SB 1421, but police officials across the state resisted the new law, challenging the bill and its retroactivity in court, and physically shredding documents they didn’t want to make public, in order to protect officers.

Last week’s filing marks the latest addition to a line of lawsuits against agencies that have refused to turn over SB 1421 documents. (The First Amendment Coalition even had to sue California Attorney General Xavier Becerra, after the AG chose to withhold records relating to misconduct among state police officers. The FAC ultimately prevailed against the AG’s office.)

These public records, according to the lawsuit, should be released within a maximum of 24 days after a request is submitted. Of all the police agencies from which the ACLU has requested SB 1421-eligible documents, the LASD was the only agency that has not provided the organization with any records at all.

The LASD has denied the ACLU’s document requests multiple times, by employing “meritless and inapplicable exemptions” to the California Public Records Act — saying that the ACLU’s requests were overly broad, and the org needed to provide the names of officers about whom the org was seeking records.

But “given the secrecy of peace officer records prior to the passage of SB 1421,” the suit challenged, “it is impossible for the ACLU or any requestor to provide the names of deputies who have disclosable records of misconduct.” Other agencies in the state had responded to requests under the new law without the ACLU or news media organizations having to provide specific deputies’ names. The department has statutory “duty to assist” with the formulation of a CA Public Records Act Request due to its “greater knowledge of its own recordkeeping system,” the lawsuit continues.

Even when the ACLU sought personnel files for the individuals named on a “Brady list” of officers found to have been dishonest, the sheriff’s department rejected the requests. According to the LASD, the request was “overly broad” and failed “to describe an identifiable record.” Moreover, the department said it was “not obligated to expend time to . . . . research to attempt to determine the names of the personnel [ACLU] is seeking.”

The ACLU is suing on behalf of the families of Anthony Weber, Jazmyne Eng, and Nephi Arreguin, who are still waiting to receive LASD records related to their loved ones’ deaths during law enforcement encounters.

“They have waited months since making those requests and years since their family members’ deaths for this information but have received nothing but silence from LASD,” according to the suit.

When LASD Deputy Brian Vance killed Jazmyne Ha Eng, who was reportedly under 5-feet-tall and weighed little more than 100 pounds, the 40-year-old had been seeking psychiatric help at the Asian Pacific Family Center in Rosemead. Eng, who was suffering from schizophrenia, was holding a small ball-peen hammer and screaming when Vance, one of four deputies who responded to the call for a psychiatric hold, shot her. The shooting occurred within 12 seconds of the deputies making contact with Eng on January 4, 2012.

Vinly Eng, Jazmyne’s brother, sought records regarding his sister’s death and the deputies who responded to the call. The department said that it had no eligible records for the three other deputies involved, and has produced no records for those deputies or for Vance, the deputy who shot Eng — despite the fact that the deputies were disciplined for failing to meet department standards during the encounter.

On May 7, 2015, LASD deputies opened fire into a vehicle, killing Nephi Arreguin, a reportedly unarmed 20-year-old soon-to-be father suspected of burglary. It’s unclear whether Nephi was sleeping when deputies approached him in his car, whether he began driving when deputies neared, and whether he drove toward one of the deputies before the shooting occurred.

Anthony Weber was 16 when deputies fatally shot him on February 4, 2018, as he fled from deputies into an apartment complex. Officers said they had seen a firearm tucked into Weber’s waistband before they shot him, but no gun was found at the scene. “… The department publicly speculated that someone removed the gun from the scene of the shooting,” the lawsuit states. The shooting set of weeks of protests in South LA, and Weber’s family received a $3.75 million settlement from LA County. Yet, Weber’s mother, Demetra Johnson, still hasn’t been able to access records related to her son’s death.

On March 21, 2019, Johnson, submitted a CA Public Records Act request to the department, seeking documents related to the police report and investigation of her son’s death, as well as any records of administrative discipline for the officers who killed her son.

The department sent a 14-day extension request to Johnson. Months later, however, the department has failed to respond to Johnson’s follow-up letter, and still has not released the requested records, according to the lawsuit.

“My son Anthony was 16 years old when he was shot by the deputies for no reason,” says Johnson. “He had no gun, nothing to threaten them. It has been more than a year, and I still don’t have answers. We deserve to see those records, not just for my family, but because it will help change the sheriff’s department.”

The LA County Sheriff’s Department has “repeatedly refused to satisfy [its] obligations under the CPRA to timely search for and produce records responsive to Petitioners’ requests,” the lawsuit says. “This conduct violates the CPRA and Article I, § 3 of the California Constitution.”