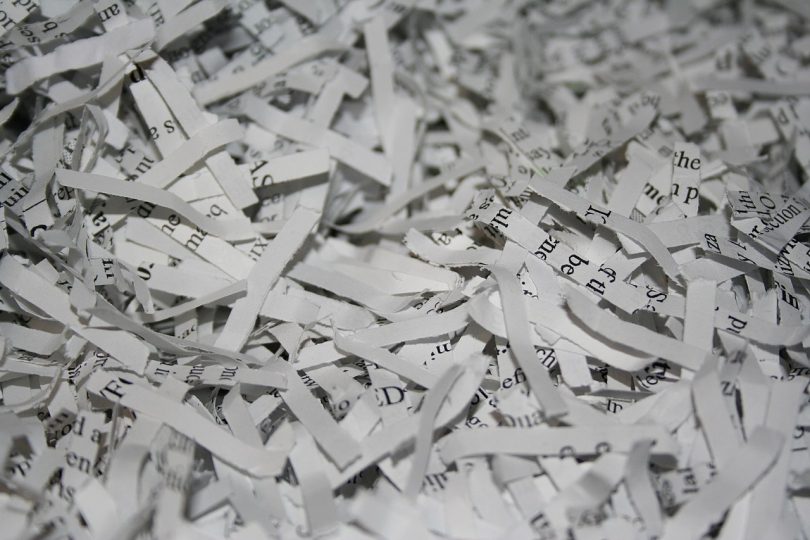 By Darwin BondGraham, The Appeal

A landmark California transparency law making police misconduct records public for the first time went into effect in early January, but some city governments shredded files while lawmakers were considering the legislation.

In late 2018, Fremont, a suburban Bay Area city 25 miles south of Oakland, destroyed a multi-decade archive of police records. Some of the shredded files covered officer-involved shootings including 11 “training review board” investigations. Since 2002, the Fremont Police Department has convened such boards to examine shootings, vehicle pursuits, and similar incidents. If the board determines that an officer may have violated a law or department policy, it forwards the case to internal affairs for a separate administrative investigation that can result in discipline.

“We routinely purge police records based on our retention schedule, including internal affairs documents,” Geneva Bosques, a public information officer for the police department, wrote in an email response to questions about the recent records purge.

Bosques said the shredding was unrelated to the legislation, Senate Bill 1421. “In 2016, the police department initiated a review of the records we had in our possession to include but not limited to police reports, personnel records, officer involved shootings and internal affairs investigations,” she said.

The timing of the purge, however, ensures that numerous records that may have been disclosed under SB 1421 can never be reviewed by the public.

One review board file that Fremont destroyed was an investigation into the shooting of Glenn David on Feb. 18, 2004. Briefs and depositions contained in a wrongful death lawsuit filed by David’s family in federal court, and police incident reports obtained from Fremont through a public records request, describe some of what happened that day.

David was working his shift as an assembler at an electronics plant when he became distraught and stabbed himself in the abdomen with a knife. He told a co-worker he was trying to kill himself and the plant was then evacuated.

When police arrived, they found David alone inside the building, bleeding from his abdomen and wrist. Officer Michael Chinn ordered David to drop the knife, but according to the lawsuit filed by his family, David was having a mental health crisis exacerbated by methamphetamine use and yelled and threatened suicide.

“Shoot me,” David shouted at Chinn. Officers radioed for backup to bring less-lethal weapons, but David allegedly advanced toward the officers. Chinn fired twice, killing David. A mere 49 seconds elapsed between the time the police made contact with David and when Officer Chinn killed him.

David’s family contended that the police should have been better trained to deal with suicidal individuals and that Chinn needlessly escalated the confrontation rather than waiting for backup. But in 2006, a federal judge ruled that Chinn acted lawfully.

The Fremont police never opened a separate internal affairs investigation into the David shooting, according to police records quoted by a federal judge in the lawsuit brought by David’s family. Because FPD’s policy is not to open an investigation that could result in discipline against an officer unless the review board recommends it, the result is that the only record of the incident was the training review board’s file which the city destroyed.

When California lawmakers approved SB 1421, they did so with the finding that the public “has the right to know” about officer-involved shootings and serious uses of force, and to see how law enforcement agencies police themselves. Fremont’s decision to destroy training review board files prevents the public from examining how shootings were reviewed by the police department as well as its response to people in mental health crisis.

Fremont also recently changed the way it classifies training review board files so that the public is prevented from examining officer-involved shootings that don’t result in internal-affairs investigations. In November 2018, Fremont’s City Council voted to amend its records retention policy by adding a classification of police personnel files known as “other admin review.” According to city officials, because “other admin review” files aren’t part of an internal affairs or criminal investigation, they have to be kept for only two years before they are destroyed.

Another file shredded by Fremont concerned the fatal shooting of Zaki Shinwary on Jan. 16, 2015. Like David, Shinwary was armed with a knife, acting erratically and threatened people before two officers confronted him. Police said he advanced on them with the knife in his hand and was shot and tased.

Union City, a suburb adjacent to Fremont, also destroyed a large number of police records in June 2018 while SB 1421 was moving through the legislature toward the governor’s desk for signature.

Police shredded reviews of officer-involved shootings, vehicle collisions resulting from high-speed pursuits, and use of force reports from 1983 to 2015, according to documents obtained through a public records request.

At least 12 records of incidents in which officers fired their guns were destroyed, including three in which officers shot and killed dogs, as well as two “unintentional shootings” in 1989 and 2009 that were judged to be “out of policy,” but it’s unclear what transpired in those incidents, whether any person was injured or any officer faced discipline.

Many of the traffic collisions involving Union City cops were determined to be caused by an officer’s poor decision making and to be preventable. Supervisors issued written reprimands to officers and made them attend training sessions, according to brief descriptions of the destroyed files. However, it’s unclear if members of the public were injured in any of the collisions.

Union City officials did not respond to questions about whether their destruction of records was related to SB 1421.

A purge in Livermore

In Livermore, a suburban city 45 miles east of San Francisco, officials conduct a yearly purge of old records from all of the city’s departments.

“We typically destroy at least once a year, at the end of the year,” City Clerk Sarah Bunting said. “We routinely destroy records that have met or exceeded their retention period.”

The city’s records destruction policy typically includes purging police internal affairs files. As a result, Livermore already had few files of police misconduct investigations or use of force incidents dating back more than half a decade that would be subject to disclosure under SB 1421.

However, Livermore is in the process of destroying files for 27 complaints made to the police department’s internal affairs unit during 2012, according to documents obtained through a public records request. A list of files doesn’t reveal the allegations in these cases, whether they were sustained, or whether any officers were disciplined.

Also on Livermore’s list of records to destroy are hundreds of use of force reports spanning 2008 to 2012, and six reviews of officer-involved shootings that occurred in 2009, 2011, and 2012.

Under California law, police departments can destroy records of use of force incidents and civilian complaints alleging misconduct after five years. Cities can choose to adopt their own policy of maintaining these records for longer periods, but many choose not to.

The Livermore Police Department didn’t respond to requests for comment about whether the purge of records from 2008 to 2012, including shootings, was in any way related to the passage of SB 1421.

State Senator Nancy Skinner, the author of SB 1421, said she intended for the law to apply to older police misconduct records. In January, state Attorney General Xavier Becerra issued an information bulletin instructing law enforcement agencies to preserve older records that may be subject to disclosure.

However, Becerra is withholding Department of Justice files regarding police misconduct and shootings. His office argues that there has been significant legal controversy about whether the law should be retroactively applied. Becerra’s position drew a rebuke from Skinner during a Senate budget committee hearing last week.

“Your decision not to release the records has resulted in the state being sued,” Skinner told Becerra. “So we are now being sued because we did not uphold our own law.”

Skinner was referring to a lawsuit brought by a coalition of media groups seeking to compel his office to to disclose records. But other lawsuits have been brought by police unions seeking to prevent the law from applying to records created before January 1, 2019. So far, police unions have lost in multiple trial courts and the state’s 1st and 2nd Appellate District Courts. But the lawsuits have created a delay during which other cities have moved ahead with plans to destroy older police misconduct files.

Meanwhile, more local governments are moving ahead with destroying older police misconduct files. On April 2, Yuba City’s police chief requested permission from the City Council to shred internal affairs investigation files before Jan. 1, 2014, and use of force reviews before Jan. 1, 2016.

This story was originally published on The Appeal, a nonprofit criminal justice news site.