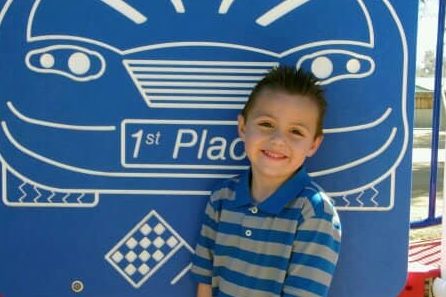 The Los Angeles County Sheriff’s Department has arrested the boyfriend of the mother of 10-year-old Anthony Avalos and charged him with murder.

Just to remind you, around noon last Wednesday, June 20, deputies from the Lancaster station of the LA County Sheriff’s Department responded to a 911 call for a medical rescue. A ten-year-old boy was not breathing.

When the deputies got to the Lancaster apartment, they found the boy to be “non-responsive.” The child’s mother, Heather Barron, said he’d gotten his injuries in a fall. The deputies called for paramedics and the boy was rushed to a nearby hospital, with sheriff’s deputies providing an escort.

We know now, of course, that the mortally injured ten-year-old was Anthony Avalos.  And this was not the first time authorities had been called to his house.

According to Los Angeles County Sheriff Jim McDonnell, who held a press conference about the arrest on Wednesday afternoon, detectives from the LASD’s Special Victims Unit, and from Homicide, became involved in the investigation almost immediately after the boy was rushed the hospital.

The detectives worked with the LA County County Department of Children and Family Services (DCFS) to remove eight other children from the household, said McDonnell. The kids, who ranged in age from 11 months to twelve years old, either lived in the home, or were in some way associated with the family. Meanwhile, Anthony, who reportedly had extensive head injuries, survived through the night, but at approximately 6:30 a.m., the boy died.

Despite his mother’s story about the fall, his death was considered by sheriff’s investigators to be “suspicious.”

As doctors tried unsuccessfully to save Anthony, the detectives, according to McDonnell, continued their investigation. They began interviewing a wide variety of family members and others, said the sheriff, including Anthony’s mother and her live-in boyfriend, Kareem Leiva, with whom she reportedly had a couple of other children.

According to authorities, Leiva was 10-year-old Anthony’s stepfather. Although detectives talked to Leiva immediately after Anthony’s death, they did not arrest him, and the man declined to come down to the Lancaster sheriff’s station for a more formal interview until Wednesday morning,

Among the oddities of Wednesday morning’s interview with Leiva was the fact that, as they talked to the man, they detectives noticed he was injured.

His upper chest near his throat—was “lacerated.” Leiva said he had injured himself in an attempted suicide. This and a number of other statements Leiva made in the course of the interview led to the man’s arrest for Anthony’s death.

Leiva’s injuries were bad enough that he was transferred to the hospital for medical treatment. But once released by the medical staff, according to McDonnell and Detective Chris Bergner, who also participated in the press conference, he would be charged with murder. Leiva’s bail will be set at $2 million.  He was reportedly still hospitalized Wednesday night.

One among the many tragic components to Anthony’s death was the fact it reportedly followed a dozen calls to authorities from family members and others about suspected child abuse of Anthony and his siblings.

Yet, the last visit by social workers to check on Anthony was more than two years ago, on April 2016, according to homicide detective Bergner.

Citing anonymous sources, the LA Times reported on June 24 that when 10-year-old Anthony died, his body was covered with cigarette burns and other injuries.

Other media outlets described the boy’s body as extremely malnourished at his death.

Yet, when asked about these injuries, Sheriff’ McDonnell characterized the descriptions as “grossly overstated,” and “not accurate based on what our detectives have seen.”

It has also been widely reported that Anthony “came out” as gay, and that homophobia may have had a role in his death. When asked about the reported homophobia angle, Bergner said the issue “has not come up in our investigation at this time.”

Yet, DCFS director, Bobby Cagel, who was appointed to head the often troubled agency seven months ago, told reporters on Tuesday that, according to caseworkers, at some point, Anthony told his mother that he “liked girls and boys.”

Whether that constituted coming out for the ten-year-old was not clear.

The LA Times and others have characterized Kareem Leiva, now charged with murder, as an MS-13 gang member.

“We’ve heard that,” said McDonnell at the press conference. But investigators had not “corroborated that.”

Mcdonnell confirmed that Leiva has a criminal record, but it is “not extensive,” he said. He did not elaborate.

As the story continues to unfold, accounts by Anthony Avalos’ aunt, Maria Barron, and others were troubling. Barron said she began alerting DCFS in 2015, when she noticed bruises and other injuries on Anthony and his siblings that the children told her were caused by Leiva. She said the children also reported Leiva locking them in small spaces where they had to urinate and defecate on the floor.

DCFS has confirmed these and other complaints of this nature, in addition to reports of sexual abuse of Anthony by a male relative not living in the family home, which Cagel said were “substantiated.”

At Tuesday’s LA County Board of Supervisors meeting, Supervisor Kathryn Barger introduced a motion asking for a report on the circumstances surrounding and leading up to the death of Anthony Avalos, especially since he had been repeatedly on the radar of DCFS workers.

DCFS director Cagel was present at the meeting as well, and spoke to the board.

“I’ve been here for seven months,” he said.  “But I’ve been doing this work for 30 years and my personal mission, frankly, is around trying to prevent this kind of thing from happening.”

The department is “committed to transparency,” Cagel continued.  And has been “collecting information” about the murder of Anthony Avalos since the moment Cagel learned about it, “in any effort to answer the question, why?”

“I certainly agree with you about the need for urgency here,” he said of Barger’s concerns about possible lack of resources in the Antelope Valley DCFS office, and about “the quality of services and oversight” provided to DCFS-involved families, having a bearing on Anthony’s death.

“Our office knows we need a greater sense of urgency in LA County.”