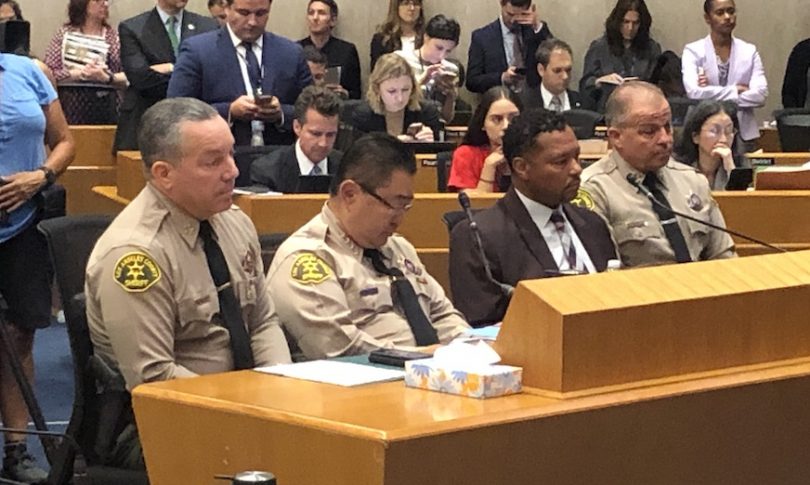 On Tuesday, October 1, the Los Angeles County Board of Supervisors voted unanimously to hold LA County Sheriff Alex Villanueva accountable for a “ballooning” $63.4 million budget deficit. They did so by temporarily freezing department officials’ spending and their ability to hire certain administrative, non-sworn personnel. During the freeze, the department is required to work with the Chief Executive Officer (CEO), the Auditor-Controller, and County Counsel to come up with a budget deficit mitigation plan — a plan that the CEO’s Office repeatedly requested from the LASD over the last year, without success. In the interim, the deficit continued to grow.

Finally, the issue came to a head as the county supervisors, CEO, and Auditor-Controller worked to balance last year’s budget.

The motion, authored by Supervisors Hilda Solis and Sheila Kuehl, noted that the sheriff’s department is not the only agency that provides legally mandated critical services to the public. Like the leaders of the county’s other 37 departments, they wrote, the sheriff must fulfill those public services while following the county’s “budgetary guidelines.”

“When Departments fall short, the gap must be covered by the County General Fund – which ultimately means that other County priorities go unfunded,” the motion states. These priorities include housing and other social services that benefit vulnerable groups, like transition-age foster youth and homeless individuals. It also means less funding for healthcare initiatives, childcare, and domestic violence survivors, Supervisor Solis said during the meeting. 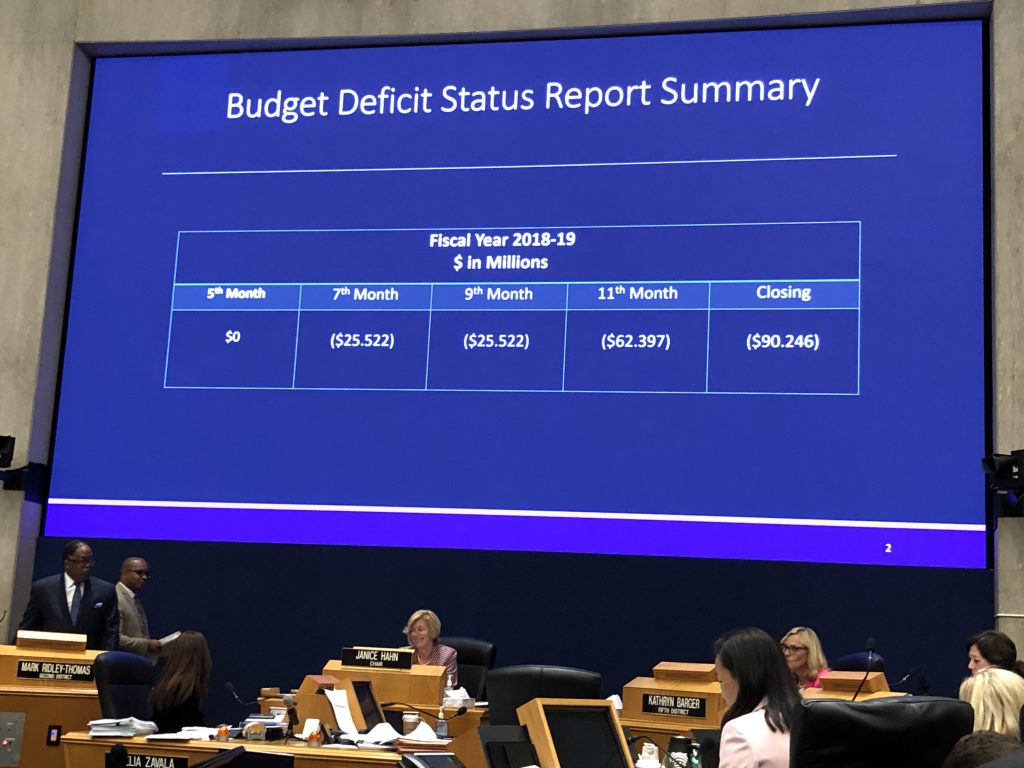 The hiring and spending freeze, Solis said, “is not about taking away the safety and security of our neighborhoods. This is in no way a message to say that we don’t want to see cops on the beat.”

The point that the motion won’t negatively impact public safety is one that several board members rushed to make clear.

The motion, in fact, does not affect the department’s ability to hire sworn officers, custody assistants, security officers, or those in forensics. It only affects certain administrative and clerical positions.

The message is, however, that the sheriff’s department, all other county departments, and the supervisors must be “careful stewards” of the taxpayers’ money, Solis said.

“This isn’t the only department we’ve had this problem with,” she added.

But, Solis said, the sheriff’s department’s deficit has been the most “staggering” she’s seen in her time on the board.

Several of the board members offered assurances that the motion was not a personal attack on the sheriff, with whom the board has had a strained relationship for nearly the entirety of Villanueva’s nine-plus months as sheriff.

Yet the board’s move began to sound personal at certain moments on Tuesday, as various supervisors offered several sharp criticisms.

“We have 38 departments,” Supervisor Kuehl told Sheriff Villanueva. “Only one of them has ended the year with a deficit.”

Other departments that “could have been headed that way,” sought help from the CEO early, before the situation became too dire. “We say here are steps you can [take to] avoid a deficit,” Kuehl said to Villanueva.

“Put on your big boy pants and take those steps…”

All the other departments managed to avoid landing in the budgetary hole, said Kuehl. “I’m looking at the fire chief sitting out in the audience. If anybody had extra expenses this year, he did.” 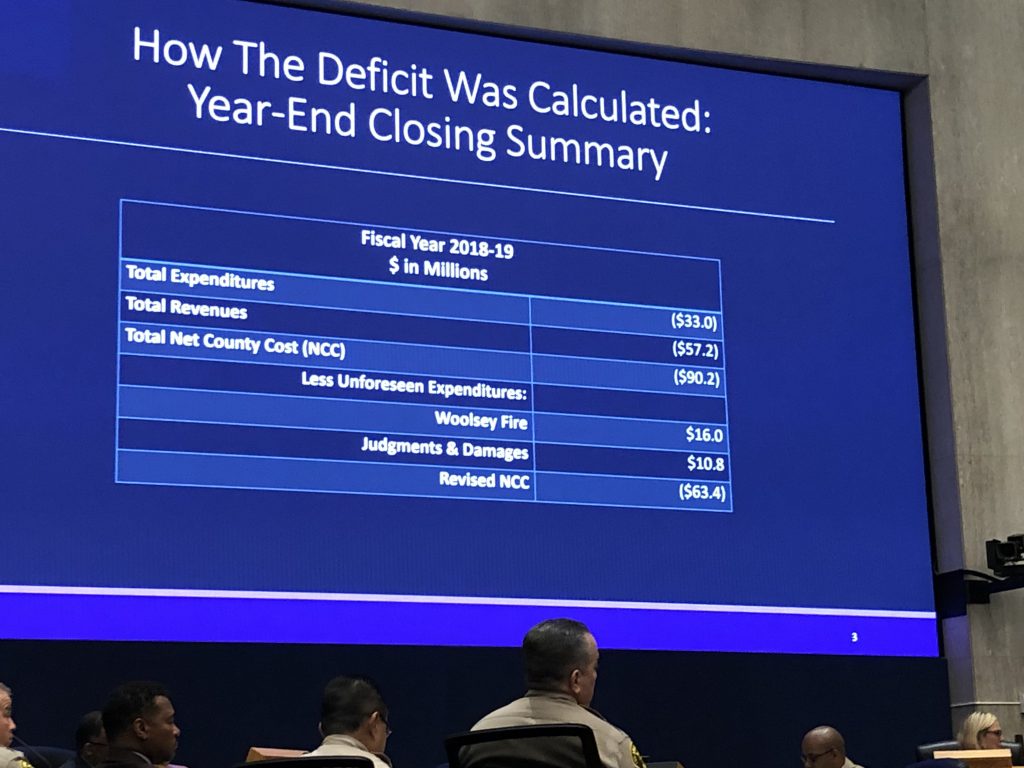 So How Bad Is the LASD’s Overspending Problem?

This has left a $63.4 million overrun. Most of that deficit can be traced back to high spending on overtime and “under-realized revenue,” the motion states. (Under-realized revenue, according to county CEO Sachi Hamai, includes grants and contracts the department was expected to obtain, but did not, or failed to apply for.)

Budgetary woes are not exactly new to the department, which has been led by Sheriff Alex Villanueva since December 2018. By April 2018, then-Sheriff Jim McDonnell was on schedule to close out fiscal year 2017-2018, with budget overspending of just over $40 million. That deficit dropped to $19.5 million by the end of the fiscal year, with help from the CEO and a budget deficit mitigation plan.

On several occasions since December 2018, when Sheriff Villanueva took office, however, the county has called on sheriff’s officials to produce such a “budget mitigation plan” to cover the running deficit and to safeguard the department against future overspending, according to Tuesday’s motion.

Thus, the supervisors forced the issue.

While sheriffs have long overspent when it came to overtime in particular, the board noted that prior to McDonnell’s $19.5 million deficit in 2017-2018, department officials had successfully balanced the budget by the end of each year. For fiscal years 2014-2015 and 2015-2016 the LASD ended the budget cycle with $15.7 million and $9 million in surplus, respectively.

An amendment to Tuesday’s motion via Supervisor Janice Hahn, aims to address the overtime problem by asking the Acting Auditor-Controller and CEO to work with the Inspector General to conduct a review focused on areas that the LASD could be more efficient in its use of overtime and other operations.

When it was the sheriff’s time to speak, he told the board that he welcomed any reviews of his operations and “constructive criticism,” but also urged the board to “fund the true cost of providing the critical services we do across all of our patrol, investigative, security, and custodial obligations that cover the entire county of Los Angeles.”

That true cost of public safety in LA County, according to Villanueva is $3.9 billion, not the $3.5 billion the agency received last year.

The LASD is “currently the most understaffed law enforcement agency in the United States,” Sheriff Villanueva said, “with 816 sworn vacancies and a per capita deputy to resident ratio of 0.9 deputies for every 1,000 residents, which is two and a half times LESS than the national average of 2.5.” Plus, he said, $47 million of the deficit was “inherited” from McDonnell, who left office last December. That inherited deficit “coupled with structural deficits in trial court funding, sworn vacancies, retiree healthcare, and unfunded mandates, leaves us severely underfunded as well,” Villanueva said.

After delivering his remarks, Villanueva said that he had “other appointments” he had to attend, and left precipitously, leaving Undersheriff Tim Murakami, Budget Director Conrad Meredith, and Director of Personnel Captain John McBride to answer any further questions.

Conrad Meredith told the board that the reason the LASD failed to “make budget last year” was due to “unfunded structural shortfalls” that “keep increasing.”

Worker’s compensation, for example, Meredith said, “has increased 30 percent in the last five years, so now we’re $45 million short in that one particular category.”

Supervisor Janice Hahn interjected to ask whether Meredith had been present in various county budget meetings. The budget director responded in the affirmative.

“So what communication did you have with not only our staff, but with the CEO” as well, “to address what you just said?” asked Hahn.

Meredith said that his team had been working with the CEO, but that “as soon as we try to put money towards closing the gap, the budget increases again.”

Things like increased costs for worker’s compensation and retiree health, Hahn replied, are not “unique to the sheriff’s department,” and should have been addressed sooner. “It’s obvious that you knew” that such shortfalls were “an issue,” Hahn said. “Maybe the audit is going to help address that.”

Supervisor Mark Ridley-Thomas agreed and said that he was glad to support Hahn’s amendment to include the audit on the sheriff’s spending and efficiency with overtime and other systems. But all departments have a budget, he said, even the supervisors themselves, and “have to live within the boundaries” of their budgets.

“There are checks and balances with which we must contend,” Ridley-Thomas told the sheriff, in a slightly scolding tone. “So any implication that this is unusual in terms of calling this department to account is just simply unsubstantiated.”

Ron Hernandez, President of the Association of Los Angeles Deputy Sheriffs, emphatically did not agree, and told the board that the way they were choosing to hold the department accountable by freezing hiring, and thus, according to Hernandez, “cutting public safety” was “irresponsible.”

Various members of the community and advocate organizations, in contrast, called for increased oversight of the sheriff’s budget and expressed concern that the board appeared to be considering increasing funding, in general, for the sheriff’s department — funding that would be better spent on community programs that keep people out of the criminal justice system in the first place.

For now, Sheriff Villanueva will be required to return to the board quarterly to give a progress report “to ensure [the sheriff’s department] operates within the Board-adopted budget,” according to the motion.

Meanwhile, $143.7 million in department funds will be frozen and unavailable to the department until the mitigation plan is in effect.