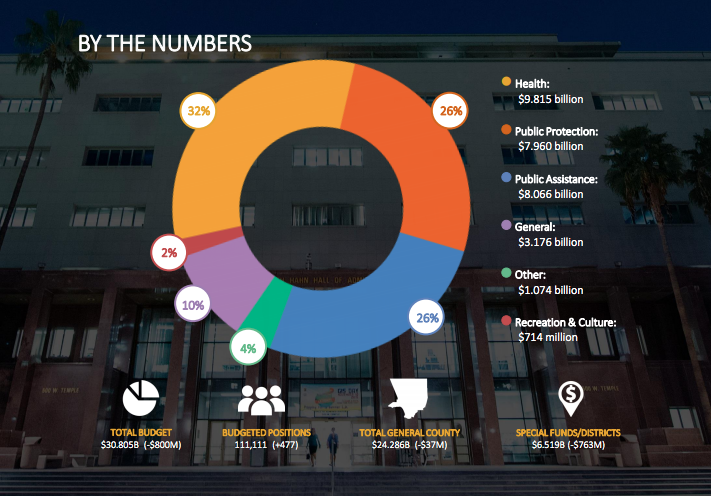 On Tuesday, Los Angeles County CEO Sachi Hamai presented the LA County Board of Supervisors with a proposed $30.8 billion budget for Fiscal Year 2018-2019 the mission of which is to “improve the quality of life for all County residents, particularly those struggling on the margins of society,” according to Hamai.

The more than 1000-page budget allocates $52.2 million in federal and state money for California foster care and adoption programs. With the money comes an increase of 104 positions to the Departments of Children and Family Services and Mental Health. The first state-required program, the Continuum of Care Reform, which is overhauling counties’ child welfare placement systems by eliminating traditional group homes, and focusing on long-term placements with foster families. As part of the county’s efforts to comply with CCR, it has implemented the Resource Family Approval, which program works to improve the assessment, approval, and training process for foster and adoptive caregivers of vulnerable youth.

A total of $374 million is set aside for fighting the county’s homelessness crisis. The figure includes an extra $100 million over last year, thanks to Measure H’s quarter-cent sales tax increase.

According to Hamai, during the second half of 2017, more than 7,000 people in LA County entered crisis, bridge, and interim housing, and more than 3,000 homeless families moved into permanent housing.

The budget includes $21.5 million in additional funds for increasing the number of inpatient mental health beds and the use of state hospital beds for the county’s mentally ill. Another $18.9 million is set aside for mental health services laid out in the Mental Health Services Act of 2004. This money will pay for 20 positions to run services focused on prevention and intervention for the county’s residents who live in permanent supportive housing.

The county’s substance abuse programs and services would receive an additional infusion of $79.2 million.

The Office of Diversion and Reentry are slated to get a new pot of $14 million (for a total of $34.3 million budgeted) to increase permanent supportive housing for justice-involved individuals from a supply of 1,000 to 1,500.

Hamai’s budget would increase the county’s spending on programs intended to reduce recidivism among the county’s probationers under SB 687 by $26.9 million. The money will go toward re-entry centers, individual case management, employment services, and more.

A total of $12 million from probation’s budget dollars is slated to help with the ongoing establishment of The Office of Youth Diversion and Development, “to identify and support diversion programming targeted at youths.” The $12 million will be allocated over a four-year period.

The supervisors voted last November to launch a comprehensive and county-wide youth diversion program designed to redirect the thousands of LA kids who would otherwise be headed for the juvenile justice system.

“This budget reflects our determination to confront homelessness, the dearth of affordable housing and the need for criminal justice reform,” Supervisor Mark Ridley-Thomas said. “It also expands access to health services and an equitable economy, ventures into innovations in technology and biosciences and celebrates the arts.”

The county will hold public hearings on the budget starting on May 16, and the supes will start their deliberations on June 25.

The Los Angeles County Sheriff’s Department is running a budget deficit of approximately $40.3 million in county funds for the current fiscal year, according to a 14-page report by LA County’s CEO and Auditor-Controller.

The report, presented to the LA County Board of Supervisors on Tuesday, says the “net county cost” deficit can be attributed, in part to the $81.5 million in over-expenditures on salaries and employee benefits and by $6.7 million in “under-realized revenues.” Part of this extra cost is offset, the report says, by spending less money on “services and supplies ($23.8 million), other charges ($7.4 million), capital assets-equipment ($11.6 million) and an increase in reimbursable revenue from other County departments of $5.1 million.”

The cost of this fiscal year’s overtime payments is estimated to be $260 million—more than double the $118 million allocated in the department’s budget. The report shows that the department regularly overspends in this category. During the previous fiscal year, the LASD spent $125 million more on overtime than projected. The year before that, the department exceeded the budget by nearly $136 million.

“One of the areas that we believe we need to work with the sheriff’s department,” said Hamai, “is really doing an in-depth study of the overtime costs” to make sure that those costs are indeed tied to staff vacancies.

The department says it plans to offset the deficit through a number of “one-time solutions including a reduction in overtime and a hard freeze on services and
supplies and capital assets spending.”

The “misalignment” of the LASD’s budget is not a new problem, Hamai said, but one that has been going on for “20 years or so,” and one that will not be solved “overnight,” but which will instead require a “phased-in” strategy.

“I think through our joint effort, we have identified important budget realities that must be addressed,” LA County Sheriff Jim McDonnell told the board. “This includes the very real possibility that the LASD is underfunded, but also the opportunity for the LASD to critically review past practices such as overtime, growth in projects and programming, and so forth.”