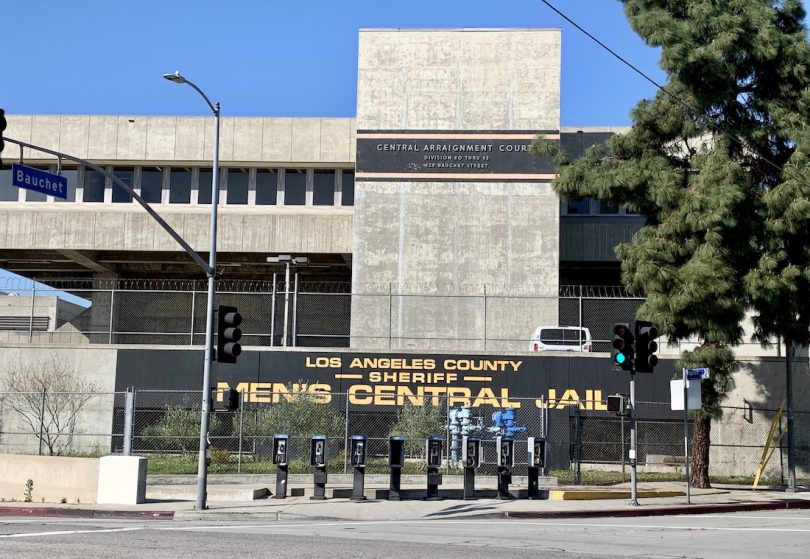 In August 2019, the Los Angeles County Board of Supervisors made the historic decision to cancel a $1.7 billion contract to replace the dangerous and dungeon-like Men’s Central Jail, and to commit that money and effort to a “care first, jail last” ethic, instead. Then, 10 months later, near the end of a board meeting on June 23 — amid nationwide protests demanding government leaders dismantle the criminal justice system in its current form and replace it with a system focused on community health and care — Supervisors Hilda Solis and Sheila Kuehl proposed the board take the next step toward decarceration.

This Tuesday, July 7, at approximately 11:45 a.m., after hearing dozens of public comments, the supervisors voted unanimously to approve the motion, which directs county departments and the Alternatives to Incarceration Workgroup (ATI) to come up with a plan for closing MCJ within a year.

While a large portion of the callers that the board took expressed concern about closing the MCJ, Solis noted that the supervisors also received 1,500 emails in support of closing the jail, and just 20 in opposition to the plan.

Youth Justice Coalition’s Phal Sok, who had been incarcerated in the crumbling “concrete box” that is MCJ, urged the supervisors to decarcerate and do away with the jail.

“Speaking as someone who is directly impacted, someone who is formerly incarcerated, as someone who caused harm in our community: that cage … that you spend millions of dollars a year on did not stop me from doing that harm,” Sok said. “It is about choices that people make. Ultimately, what I needed was somebody to guide me in those choices. I needed support from folks in the community to call me, and love me, and care for me,” not a “man with a badge and a firearm.”

Now, Sok said, is the time to “listen to folks that have been impacted,” who have been incarcerated in MCJ, and to have the courage to “move away from punishment and toward accountability.”

Tuesday’s action is the latest milestone vote down this new “care first” path on a 15-year journey toward replacing the jail, which Solis and Kuehl point out “consistently ranks among the ten worst facilities in the country.”

“It has been well-documented over at least the last 25 years, in lawsuits, federal investigations, court monitored settlement agreements, complaints, and grievances,” Tuesday’s motion stated, “that MCJ’s flawed design and infrastructure contribute greatly to the county’s inability to provide appropriate medical and mental health care, programming, recreation, and humane living conditions.”

In response to the pandemic, the LA County Sheriff’s Department has worked with other county justice officials to reduce the county’s daily jail population from 17,000 to closer to 12,000, bringing the jail system below 100 percent capacity for the “first time in at least 15 years,” according to the motion.

The fact that the county has been able considerably reduce the number of people held in county jails without increasing crime rates shows that reducing LA’s reliance on incarceration “is an achievable goal,” Solis and Kuehl wrote.

“I am committed to pursuing a path forward that allows us to no longer rely on incarceration to respond to the resident’s need for housing, nutrition, food, economic stability, treatment, healthcare,” Solis said.

Measure R required the county to develop a plan for reducing the LA County jail population, which had been hovering at an average daily population of just over 17,000 in 2019, with over 100,000 booked into jail each year.

Tuesday’s motion for a jail-closing plan directs a workgroup convened in June — to keep the county’s jail population at or below the COVID-reduced number — to collaborate with relevant stakeholders and report back to the board every 60 days with updates on what it will take to close MCJ in the next year “while continuing to ensure public safety and providing appropriate services for individuals released early or diverted from incarceration.” The motion calls for information about how those who would remain incarcerated post-MCJ-closure would be spread across the county’s other jails, and how that would impact the jail system.

When it was Sheriff Alex Villanueva’s turn to address the board, he informed the board that he had “sole and executive authority” over the jail system. “We had a plan to demolish Men’s Central Jail,” Villanueva said. Rejection of the plan “left us with the dungeon we have today — known as Men’s Central Jail. The 12,000 remaining in the jail, Villanueva said, are “a concentration of the most dangerous inmates in the system right now.”

Supervisor Kuehl stressed that half of the county jail population is made up of people who have not been convicted of crimes, but are being held pretrial, often because they cannot afford bail.

The motion also calls for an assessment of how much money the county would save by closing Men’s Central Jail by no longer having to pay for renovations and maintenance for the facility, by reducing jail staffing costs and how much the county pays for food and other costs of holding people inside MCJ, among other costs.

“In order to meet the needs to support the success of those being released, and to prevent future law enforcement contact,” according to the motion, “the County must commit costs saved from closing MCJ – including eliminating the need for renovations and the expensive attempts to provide medical and mental health care within a facility that was not designed for such care – to reinvesting into our most disenfranchised communities and increasing access to basic need and the county’s system of care, to further reduce the county’s historic reliance on its jail system to meet its residents’ health and service-related needs and embrace a new vision for the county’s future.”

“Closing Men’s Central Jail will restore dignity to our communities,” Supervisor Solis said. “People are not made whole locked up in a decrepit cell.”

Approximately 30 percent of those in jail have open mental health cases. And, according to a January 2020 report from the nonprofit RAND Corporation, approximately 61 percent of the mental health population — on any given day, more than 3,000 people — locked inside Los Angeles County’s jails could safely be released into community-based care. The problem is that the county must come up with enough community programs, services, and housing to serve those who would otherwise be locked — unnecessarily, according to RAND — inside county jails.

Judge Peter Espinoza, the director of the Office of Diversion and Re-entry, told the board that he believed the county could come up with enough housing to divert a significant portion of the MCJ population.

“We can safely do this work,” Judge Espinoza said.

While Espinoza stressed that not everyone from MCJ would be appropriate for release, he said the the county had the capacity to create “real housing and real services” for many of those currently in the jails to be “safely maintained” in the community.

The five supervisors took additional important steps to build up these alternatives to incarceration on Tuesday.

A second motion, introduced by Supervisors Mark Ridley-Thomas and Sheila Kuehl and approved by the board, will allocate $30 million to continue the work of the county’s Office of Diversion and Re-entry so that “a minimum of 500 more individuals from the jails” can be diverted over the next year, and to “expand community-based diversion and reentry services, interim housing, and permanent supportive housing” for Angelenos. (ODR has diverted around 5,500 people from jails, and provided more than 19,000 individuals with reentry services in partnership with community and county programs.

“Four months ago, we embraced a comprehensive plan to improve community health and safety by building on proven treatment and diversion programs that have already helped thousands of men and women access mental health and social services instead of going to jail,” Kuehl said. “This motion ensures that we can build on that impressive track record, and build out our plans for this transformational office.”

The supes also voted to fast-track feasibility evaluations and other studies that will allow the county to quickly fund Restorative Care Villages on medical campuses. These villages, recommended by the Alternatives to Incarceration Workgroup, will give residents “access to a full continuum of community-based, non-custodial services, including: recuperative care, a full scope psychiatric facility, housing with wrap-around services, a recovery center, as well as educational and employment opportunities.”

Many of LA’s justice system-involved residents, “lack access to affordable housing and wraparound services,” said Supervisor Solis, who authored the motion with Supervisor Kathryn Barger. “Providing more permanent supportive housing units where individuals can receive community-based mental health care will give people hope for a new beginning.” It will also, the supervisors hope, reduce the county’s “need” for jail beds.