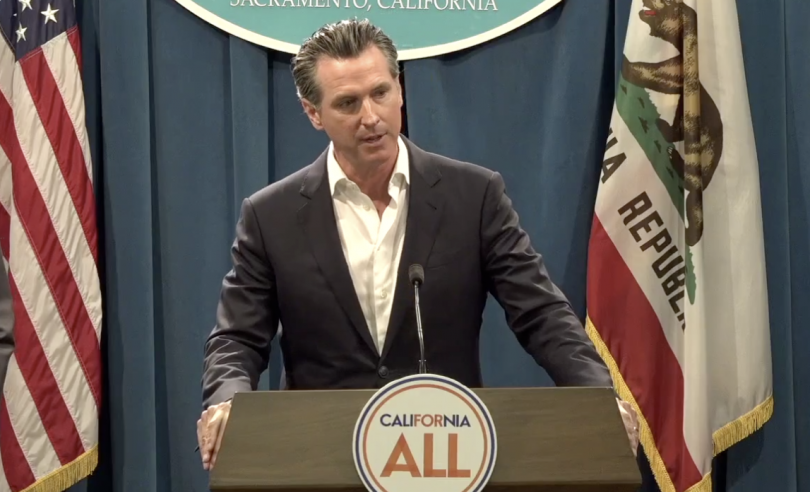 California Governor Gavin Newsom has just under two weeks left to sign a tall stack of legislature-approved bills that would significantly impact the criminal justice system, including a bill to open a path to diversion for parents accused of crimes, one that would automate the expungement process, and a bill that intends to keep kids out of the state’s troubled lockups.

We’ve compiled a quick roundup of some of the more pressing criminal and juvenile justice bills still waiting to either become laws or to land in the trash bin.

One particularly noteworthy bill WLA has been tracking, SB 394, aims to reduce the number of parents and children separated by incarceration by boosting diversion for primary caregivers.

The bill would open a pathway for courts to send parents to pretrial diversion programs, instead of prison or jail for certain low-level nonviolent crimes — so that kids and their parents are not “saddled with the debilitating collateral consequences of a criminal conviction,” according to the bill’s author, Senator Nancy Skinner (D-Berkeley).

Another of Sen. Skinner’s bills, SB 42, seeks to reduce the number of dangerous nighttime releases from jails in California.

Local jails across the state — including in Los Angeles County — routinely release both male and female inmates at all hours of the day, even in the middle of the night, often without much or any money, and without a way to contact loved ones or call for a ride to somewhere safe.

Nighttime releases have, time and again, proved to be fatal, especially for women (like Mitrice Richardson). Yet, lawmakers’ efforts to halt after-hours releases have, more often than not, failed.

Sen. Skinner’s “Getting Home Safe Act” would allow inmates to choose to remain in jail until morning. Considering most newly freed individuals may decline the offer, local law enforcement officials would be required to offer free phone calls and cell phone charging, as well as a safe place to wait for a ride.

Because it only costs counties $24,000 to send a child to a state facility, however, local jurisdictions continue to ship kids off to the DJJ, also passing on most of the cost. (It costs the state $300,000 to lock up each kid in DJJ facilities.)

Also called the Keep Youth Closer to Home Act, the bill intends to keep kids in local facilities, nearer to their families — where they can receive better treatment and services than the DJJ provides — by increasing the yearly DJJ fee that counties must pay from $24,000 to $125,000, in most cases.

Reentry Housing $$ for the Wrongfully Convicted

AB 701, authored by Assemblymember Shirley Weber (D-Los Angeles), would boost what an exonerated person receives upon exit from prison–from $1,000 to $1,000 plus an additional $5,000 for housing. The freed innocent person would also be entitled to reimbursement for housing costs for the next one to four years.

Another noteworthy bill on Gov. Newsom’s desk seeks to strengthen data gathering and makes it easier for local courts to share data with researchers.

AB 1331, the “Criminal Justice Data Improvement Act,” will help to ensure “accurate data in criminal records” that will inform legislators as they make adjustments to state law and the criminal justice system, according to Assemblymember Rob Bonta and San Francisco District Attorney George Gascón, who partnered on the bill.

AB 1331 would require the CA Department of Justice to collect data about every arrest, charge, and sentence from police departments and local court systems across the state.

Bonta and Gascón introduced the bill in response to an April report from Measures for Justice and the Stanford Criminal Justice Center. The report highlighted how difficult it is—even for researchers, let alone the public—to access criminal justice data in California, and how that negatively impacts lawmakers and officials’ ability to shape evidence-based laws and policies.

A second bill to which DA Gascón contributed, AB 1076 would bring automatic expungement and resentencing to California.

Data suggest that approximately two million people are eligible to have old arrests and certain crimes removed from their records. Yet the complicated petition process keeps most from clearing their criminal histories.

by Assemblymember Phil Ting (D-San Francisco)–in partnership with SF District Attorney George Gascón–would automatically complete expungement and resentencing processes for people convicted of eligible low-level offenses (not violent or sexual crimes), as well as people whose arrests never resulted in convictions, as long as the statute of limitations has passed.

The bill would require the California Department of Justice to actively search its criminal justice databases weekly for individuals eligible for automatic relief.

AB 1076 is estimated to have the potential to save the state thousands of dollars per record change — taking the individual resentencing/expungement costs down from $3,757 to four cents.

The state legislature has also agreed to move forward with sentencing reform via SB 136, a bill from Senator Scott Wiener (D-San Francisco) that would abolish a mandatory sentence enhancement affecting approximately one-third of California’s prison population, plus many more in county jails.

As of 2016, nearly four out of five CA prisoners had at least one sentence enhancement added to their sentence. One out of four people in prison were serving a sentence with three or more enhancements.

This bill would eliminate a one-year enhancement affecting individuals who have committed non-serious, non-violent felonies, who nevertheless get hit with an additional year in prison for each previous felony conviction that resulted in a prison or jail term (with the same 10-year limit).

Courts seeking to impose fines and fees on adult and juvenile defendants in criminal proceedings will be required to determine whether each person has the ability to pay those debts, which often become the burden of defendants’ loved ones, if Gov. Newsom signs AB 927.

The bill, by Assemblymember Reggie Jones-Sawyer (D-South Los Angeles), would force courts to presume inability to pay when a defendant is “homeless, lives in a shelter, or lives in a transitional living facility, receives need-based public assistance, is very low income, or is sentenced to state prison for an indeterminate term or a term of life without the possibility of parole.”

Gov. Newsom also has the historic opportunity to eliminate an onorous three-year deadline to access assistance from the state’s Victim Compensation Fund.

The CA Victim Compensation Board covers expenses that arise for survivors in the wake of a crime, including medical treatment, mental health counseling, burial expenses, income loss, and more.

Crime survivors lose out on tens of thousands of dollars each year because they fail to file claims on time. Far more likely miss out on assistance because they don’t know they’re eligible for financial assistance, or because they are not ready, in the aftermath of the crime, to seek help.

SB 375, from Senator Maria Durazo (D-Los Angeles), would extend the deadline for compensation to 7 years, giving California survivors more time to get the help they need.

The state also appears likely to abolish the use of controversial private prisons.

Currently, private prisons in California and one in Arizona hold approximately 4,000 California inmates.

By signing AB 32, Governor Newsom would make good on his campaign promise to discontinue the use of private prisons. The bill would ban new private prison contracts starting in 2020 and phase out their use altogether by 2028.

Stay tuned for updates on these and other criminal justice bills as Gov. Newsom draws closer to his October 13 bill-signing deadline.