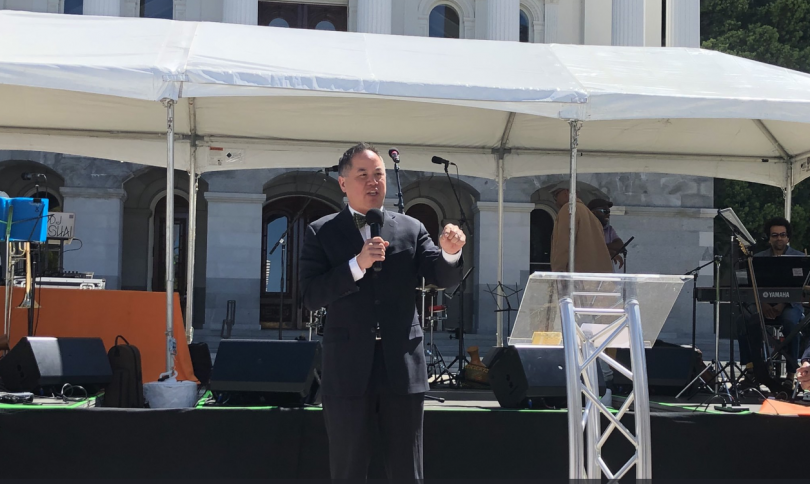 AB 1076, a bill to automate the expungement process statewide, and AB 1331, a bill that would expand California’s collection of criminal justice system data.

Data shows that there are around two million people in California who are eligible to have old arrests and certain crimes removed from their records. The complicated petition process keeps most from clearing their criminal histories, however. Others fail to wipe their records simply because they are not aware that they are eligible, or that such relief even exists.

These enduring stains on criminal records can keep people from being able to access housing, employment, and education. People with past felony convictions must contend with thousands of legal restrictions that make successful reentry all the more difficult. Even old arrests that did not lead to prison time can block a person’s path to employment.

AB 1076, by Assemblymember Phil Ting (D-San Francisco)–in partnership with SF District Attorney George Gascón–would automatically complete expungement and resentencing processes for people convicted of eligible low-level offenses (not violent or sexual crimes), as well as people whose arrests never resulted in convictions, as long as the statute of limitations has passed.

“Eight million California residents have criminal convictions on their records that hamper their ability to find work and housing, secure public benefits, or even get admitted to college,” according to Californians for Safety and Justice, the bill’s sponsor. “Millions more have old arrests on their record that never resulted in a conviction but remain as obstacles to employment. Nearly 90% of employers, 80% of landlords, and 60% of colleges screen applicants’ criminal records.”

Moreover, the bill would save taxpayers some serious cash. Currently, processing each petition for a record change costs the state $3,757. Automating the system would take that number down to four cents per record.

The bill would require the California Department of Justice to actively search its criminal justice databases weekly for individuals eligible for automatic relief.

The state DOJ would also be tasked with including information on who had and hadn’t been granted record changes under AB 1076.

The California Law Enforcement Association of Records Supervisors, says that the burden of clearing records should fall on the individual, not the state. “AB 1076 will unnecessarily put the burden on records management personnel, who are short staffed and without sufficient resources, to move arrest dispositions to an automated system, a very labor intensive and cost-prohibitive task,” says CLEARS. “This proposed policy further creates a liability for law enforcement agencies that may inadvertently miss a defendant’s record eligible for dismissal.”

But leaving barriers like a complex expungement process between Californians and jobs and housing has a far worse impact on the community and economy, according to Assm. Ting. “There is a great cost to our economy and society when we shut out job-seeking workers looking for a better future,” Ting says. “This bill would open doors to those facing employment and housing barriers by automating the process of clearing an arrest or criminal record for eligible individuals.”

A related bill, AB 972, would have brought about automatic resentencing for Proposition 47 crimes—six low-level drug and property felonies that were reduced to misdemeanors. That bill remains frozen in the Assembly Appropriations’ “suspense file,” where bills can be abandoned quietly without lawmakers having to actually vote them down.

The second Assembly-approved bill, AB 1331, the “Criminal Justice Data Improvement Act,” will help to ensure “accurate data in criminal records” that will inform legislators as they make adjustments to state law and the criminal justice system, according to Assemblymember Rob Bonta and San Francisco District Attorney George Gascón.

The bill requires the CA Dept. of Justice to collect data about every arrest, charge, and sentence from police departments and superior courts across the state.

“AB 1331 is critical in ensuring accurate data in criminal records in order to provide lawmakers with the information they need to make necessary changes to the criminal justice system,” says Assm. Bonta. “If criminal outcomes are not fair and just, they undermine public safety goals and prevent people from achieving liberty in their personal lives. AB 1331 will work to provide more just outcomes in the criminal legal system by redesigning the data collection process at the local and state level.”

Assm. Bonta and DA Gascón introduced the bill in response to an April report from Measures for Justice and the Stanford Criminal Justice Center. The report shed light on how difficult it is—even for researchers, let alone the public—to access criminal justice data in California.

The report also highlighted glaring gaps in the state’s criminal justice data that “limit the ability of researchers, policymakers and the public to assess criminal justice policies, especially critical during the current period of reform.” These missing pieces in the data picture are not only a “threat to public safety,” but “also a threat to good governance,” according to DA Gascón.

The bill did undergo a watering-down via amendments that among other changes, eliminated requirements that the DOJ collect specific data on each person on probation or parole, every person in state prisons, and every person before the state parole board.

“Currently, under the direction of the DOJ, local law enforcement agencies are
required to fill out an itemized report, and submit the data to the Monthly Arrest and Citation Register (MACR),” CLEARS says. “It’s not clear what additional, relevant, or useful criminal justice data would be gained by requiring another weekly itemized report to the DOJ as proposed by AB 1331.”

The bill’s author says that the weekly reports would help to address the fact that, according to the DOJ, 60 percent of arrest records are missing disposition information. “Missing arrest disposition information means that many arrests that have not been filed or resulted in conviction appear as pending cases and remain on criminal records that are disseminated to employers and licensing boards, effectively criminalizing a person who may in fact be innocent,” says Bonta.