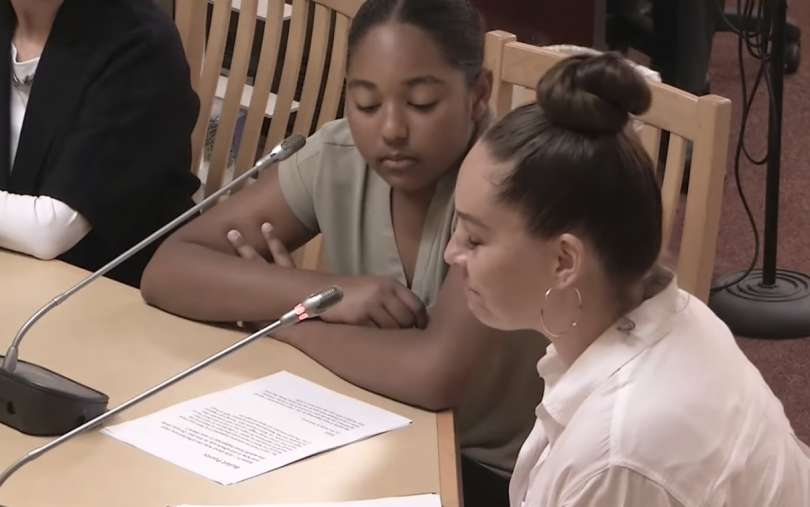 An estimated 10 million US children have parents who are currently locked up, or who have previously been incarcerated. A bill currently on Governor Gavin Newsom’s desk, SB 394, seeks to reduce the number of parents and children separated by incarceration by boosting diversion.

In 2014, a UC Irvine study found that having a parent behind bars can be more damaging to a kid’s well-being than divorce or even the death of a parent. Students with incarcerated mothers and fathers are more likely to receive suspensions in school, and are more likely to drop out than their peers. Kids with incarcerated parents also have a higher likelihood of coming into contact with the justice system, themselves.

According to report by the Vera Institute titled “Overlooked: Women and Jails in an Era of Reform,” nearly 80 percent of women in jails nationwide are mothers. And most of those jailed mothers are single parents, solely responsible for their young children.

Ten years ago, one such young mother named Ashleigh Carter was sentenced to three years in prison for a non-violent drug offense. It was her first criminal conviction, and her first time in prison. “I had never been more scared in my life,” a tearful Ashleigh told the CA Senate Public Safety Committee in April. “The thought of me having to leave my daughter terrified me. What parent ever dreams of never being able to hold their child again, make them pancakes in the morning, or teach them how to tie their shoe?”

While Ashleigh awaited trial, she said, she worked every day to show the court that she should be allowed to stay in her community and care for her daughter and disabled mother. She continued to provide for her family, working two jobs, and attended therapy regularly.

“I also successfully completed electronic monitoring, drug testing, and complied with every other pretrial stipulation,” Ashleigh said. “I compiled letters of support from members of the community and organizations that I worked with, petitioning the courts to allow me to remain at home to care for my daughter and my mother. Police officers even showed up to my hearings in support.”

“It made no difference” to the courts, said Ashleigh.

While Ashleigh’s mother was able to take care of child, sparing Asia, then-eight-month-old, from the foster care system, Ashleigh and Asia’s separation left deep wounds. Asia and her grandmother were forced to move into a shelter after Ashleigh’s incarceration.

And visits to the prison were few and far between.

“No matter how long the visits lasted, it was never enough time,” Asia said. “There isn’t ever enough time in the world with your mother, especially only a few hours every three months–if that.” Leaving her mother behind in prison after visits, Asia said, “felt like pouring salt on an open wound.”

Those brief visits left Ashleigh feeling distant from her daughter, too.

“The destruction and hurt that separation due to incarceration causes cannot ever adequately be described with words,” she said. “This pain is one that I can only compare to death, because on so many levels everyone involved suffers so much loss.”

Now, six years after her release from prison, Ashleigh continued, “we are all still healing from the time that we spent apart, still learning about each other, still trying to repair the damage that was done, and every day we spend together is another step in that healing process.”

In an effort to reduce the negative impacts of parental incarceration, some prison programs meant to boost bonding between separated mothers and fathers and their children offer extended visits and week-long day camps, allow parents to record themselves reading children’s books, or offer moms who give birth while incarcerated longer than the standard 24-48 hours with their baby.

But SB 394 seeks to keep families like Ashleigh and Asia’s together in the first place.

SB 394 would open a pathway for courts to send parents to diversion programs, instead of prison for certain low-level non-violent crimes — so that kids and their parents are not “saddled with the debilitating collateral consequences of a criminal conviction,” according to the bill’s author, Senator Nancy Skinner (D-Berkeley).

The bill passed through the Assembly on Thursday with a 29-8 vote, and now awaits a final decision from Governor Newsom.

SB 394 would authorize local superior courts, through collaboration with district attorneys and public defenders, to create a pretrial diversion program for primary caregivers that lasts between 6 and 24 months.

Additionally, the crime for which a parent is seeking diversion cannot have been committed against their children or anyone else for whom the parent is a primary caregiver.

The bill has garnered wide support, including from the American Academy of Pediatrics, the Anti-Recidivism Coalition, the California Public Defenders Association, Drug Policy Alliance, And the National Association of Social Workers.

In June, the Los Angeles County Board of Supervisors voted to send a letter in support of the bill to the state legislature and to Governor Newsom. The county’s Public Defender and Alternate Public Defender’s Office, Probation Department, and Office of Diversion and Reentry expressed support for SB 394.

Some prosecutors, including the LA County District Attorney’s Office, have taken issue with the bill, however, arguing that it will clog courts and put the public at risk.

The LA DA’s Office, led by Jackie Lacey, officially opposed the bill, alleging that it will overload the local court system, and covers crimes that should be ineligible for diversion, including corporal injury to a spouse, elder abuse, stalking, animal cruelty, and certain sex crimes.

The California District Attorneys Association, too, opposed the bill.

“This bill would create a new pretrial diversion scheme, singling out one class of individuals for disparate treatment under the law; allowing those who provide primary care for children, financially or otherwise, to avoid accountability for their crimes,” the CDAA said in a statement. Additionally, according to the association, the bill would “jeopardize public safety” by keeping future employers in the dark about crimes cleared through diversion. Victims would also suffer from such an expansion of diversion, according to the prosecutors. “The bill lacks even basic language to address how victim restitution would be impacted,” the CDAA said.

While no child “should live in an unsafe home,” the National Association of Social Workers California Chapter said in support of the bill, “all too often, parents are jailed for minor, nonviolent offenses, removed from their children when there is no threat to the child’s well-being.”

Skinner’s bill, the union said, “would reduce the trauma of parental incarceration” and avoid “the punishment of children for their parents’ deeds.”

Image: Ashleigh and Asia offer testimony before the Senate Public Safety Committee on behalf of SB 394.