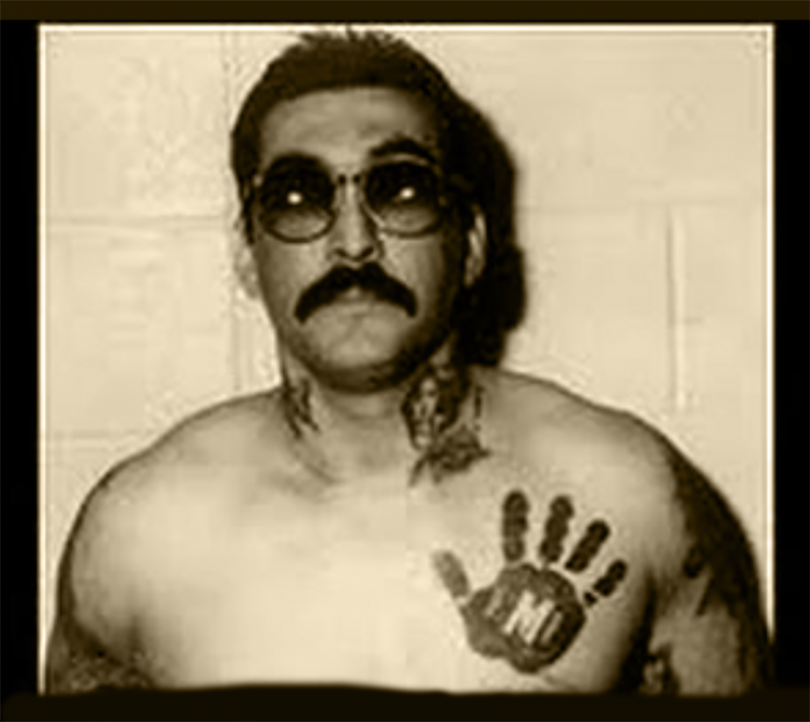 It is the second time Brown has reversed the parole board’s decision to free Enriquez.

For those unfamiliar with Rene Enriquez’ background, a brief reminder: In 1993, “Boxer” Enriquez was convicted of killing two people, and sentenced to 20-to-life. He has admitted to killing or attempting to kill others, one of whom he attacked when both were in jail awaiting trial, stabbing the man 26 times.

Earlier during that same period, when he was out on parole in December 1989, Enriquez ordered the killing of a 28-year-old mother of two. The woman, Cynthia Gavaldon, was allegedly selling drugs for the gangsters. Enriquez thought she might not be turning over her full earnings, so he ordered her death. (Gavaldon’s family comes to every parole hearing and pleads that he not be released.)

A few weeks later still, he personally pumped five bullets into another member of the Mexican Mafia, after first giving the man what was intended as a heroin overdose. The victim, Enriquez told an earlier probation board, was someone he was ordered to kill by higher-ups in the EME after the guy supposedly ran away from a fight.

Enrique also admits to being part of the gang rape of an 18-year-old girl, in his own teenage years. Moreover, according to his own account, he didn’t just kill people in anger, or because he was drunk or drugged up, or as part of a fight, but coldly, as a “business” decision, and/or to enhance his status in the notorious prison gang.

Nevertheless, in 2014, another parole panel also decided that it was time for Enriquez to be released.

In 2014, Governor Brown had affirmed around 82 percent of the parole commission’s decisions, according to the Associated Press. Yet, back then, as now, the governor declined to go along with the decision to let Enriquez out.

So why has Rene “Boxer” Enriquez been marked eligible for parole—-not once, but twice, in two years—-while men and women convicted of murder for one terrible act of lethal violence committed when they were young and troubled, get turned down repeatedly? Never mind that many of those same lesser known inmates have decades of blemish-free behavior in prison, have worked to make positive use of their time inside, and who have also worked to face the grievous harm that they did to others in their youth.

The primary reason that Enriquez gets a yes vote, while others a no, appears to be the fact that, in 2002, Enriquez became disenchanted with his relationship with the Mexican Mafia, wondering if he too might soon be marked for execution, and agreed to become a source for law enforcement officers eager for an inside look into the infamous, dangerous California prison gang, La EME. Enriquez, with his extravagant personality, and his former position of prominence in the organization, could provide genuine information—and has now done so for years, (although his information has reportedly become less and less useful, simply because it is dated).

In providing an insider look at the workings of the “Big Homies,” Enriquez morphed into more than just an informant, he became a star, and—most relevant to his bids for parole—the darling of many in law enforcement.

In fact, prior to his most recent hearing earlier this year, Enriquez received more than 60 letters from law enforcement agencies supporting his release.

Jerry Brown, however, does not share this infatuation. In his three-page letter explaining why he was again declining to okay Enriquez’ exit from lock-up, Brown acknowledged that the would-be parolee has “earned the appreciation of many prosecutors and law enforcement entities for his willingness to provide information and testify despite the risk to his personal safety.”

Yet, while Brown commended Enriquez for taking various positive steps, including participating in “a few self help programs” such as anger management classes, Jerry found “they are outweighed by negative factors that demonstrate he remains unsuitable for parole.”

Brown’s reasons for the turn-down were specific and cogent.

“It is clear,” Brown wrote “that Mr. Enriquez is knowledgeable about the nature of the gang, and how it uses violence to achieve its goals. But he has not yet articulated what made him so eager to adopt such a violent lifestyle. He purported to take full responsibility for “promoting the philosophies of the organization” and “embracing the violence.” But when pressed to discuss the reasons behind his own actions, he responded in generalities, “That’s the nature of the Mexican Mafia….”

According to Brown, Enriquez told the parol panel that “he “‘gravitated toward the lifestyle’ because he had low self esteem, ‘liked being a rebel…'” And later, once he was in prison, was “‘flattered’ by the invitation to joint the very elite group’ of the Mexican Mafia and that he wanted the ‘mythic’ level of respect the members received from other inmates.”

Brown also noted that Enriquez “blames the gang for his own choices and for his many years of extremely violent gang leadership.” But his explanation,’gang members are violent because gangs are violent,’is a truism,” wrote Brown dryly, (presumably sending many readers of the letter scuttling for their dictionaries). “Mr. Enriquez did not participate in the violence just because it was expected of him. He personally molded and shaped the Mexican Mafia’s expectations of its members, and expanded the gang’s reach outside the prison.”

In other words, Boxer’s participation was not reluctant. Nor was a person who had taken a life, who was now tortured by the sorrow he had caused. He was an icy, calculating killer who, on multiple occasions, used violence with ambitious zeal in order to advance his status

“Over and over again,” Brown wrote, “he made an independent decision to turn away from his ‘normal,’ ‘upper-middle-class’ upbringing to become a leader of one of the most dangerous gangs in America. His claim that he knew ‘early on’ that he would leave the gang is absurd—he continued participating in violent gang activity for years and carried out these murders a decade into his membership…

Furthermore, Jerry wrote, “Mr. Enriquez has been disciplined many times for serious misconduct in prison, including for trafficking drugs…physical and sexual assault on an inmates, and stabbing and inmate. Mr. Enriquez trafficked large amounts of narcotics into prison and pioneered a way to use and control a vast network of violent drug dealers and gang members outside the prison walls.” And “athough he has not been convicted of additional murders, attempted murders, or criminal conspiracies, there is no doubt he is responsible for much more devastation….”

At WitnessLA we commend the governor for his wise, carefully reasoned and refreshingly factual reversal of Rene “Boxer” Enriquez’ bid for parole.

Maybe there will come an appropriate time in the future for Boxer to rejoin the non-incarcerated world. Or maybe not. In any case, we would like to gently suggest that there are many less glamorous people who, while they have no authorized biographies written about them, are right this minute far more deserving of forgiveness and freedom that Rene “Boxer” Enriquez.

VIDEO NOTE: In order for the CDCR to recognize Enriquez’ separation from La Eme, and thus his need for protective housing within the prison, he was required to “debrief,” which meant to tell much of what he knew about the organization to prisons officials, sessions that were videotaped. The excerpts above, which are from one of his debrief tapes, are courtesy of RadioWorks.