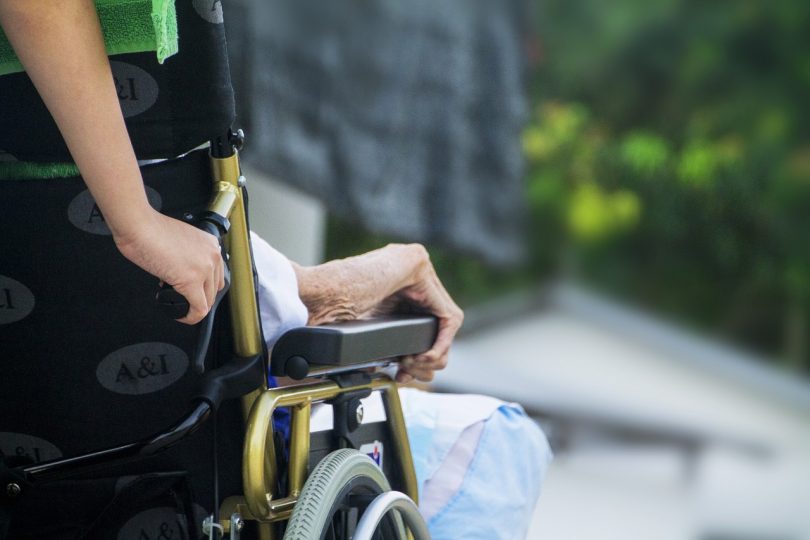 While 49 states and D.C. have laws and programs in place that allow for the “compassionate release” of prisoners nearing the end of their lives due to terminal illness or age, the programs are rarely used, according to a new report by the nonprofit Families Against Mandatory Minimums. Iowa is the only state without any law or policy that specifically allows for early medical parole, although several other states have compassionate release programs on the books, but have no rules for implementing the system.

Continuing to incarcerate the extremely low-risk and high-needs population of dying inmates, places an unnecessary fiscal burden on states, and contribute to prison overcrowding, as the nation’s population of aging inmates grows.

The proportion of prisoners over the age of 55 increased by 400 percent between 1993 and 2013, and they continue to grow, even as overall state prison populations fall. “By 2030, prisons will house over 400,000 prisoners who will be 55 and older, making up nearly one-third of the population,” the report says.

Spending on medical care for inmates has skyrocketed, too, and was 10 times higher in 2013 than it was in 1976. Inmates granted compassionate release, the report says, can access public health care on the outside that costs states a fraction of what medical care behind bars would cost.

Moreover, keeping inmates near death shackled to beds and away from their families is inhumane, according to report author Mary Price, who serves as general counsel at FAMM and co-chairs the American Bar Association Criminal Justice Section’s Sentencing Committee.

Price and her team closely examined the laws, policies, and practices regarding compassionate release in each state, and found that numerous barriers block the way for families seeking freedom for their grievously ill loved ones. So the FAMM team created 51 memos that lay out “every state’s publicly available compassionate release rules so that prisoners and their supporters will have one place to visit where they can learn about eligibility criteria, application procedures, needed documentation, and decision-making steps.” The FAMM researchers hope that breaking down each state’s rules will increase applicants’ likelihood of winning early medical release.

“Our review found that many [compassionate release programs] are so complicated and confusing that trying to navigate them can be overwhelming for the very people they ought to help,” the report says. “We often found ourselves struggling to make sense of incomplete, inconsistent, and at times even incoherent guidelines and rules. We can only imagine what it must be like for men and women in prison who are dying or living with serious medical conditions, or for their families trying to help from the outside.”

Often, inmates “are literally running out of time to find information” regarding their state’s compassionate release program.

And just 13 states have laws that require officials to keep track of and report compassionate release statistics. Only a few of those states make the data available to the public.

Many states, the report says, “use eligibility criteria that seem unduly, and even cruelly, restrictive.”

In California, for example, prisoners applying for medical release can only be approved if they are permanently incapacitated to the point that they need round-the-clock care, because they can no longer perform “activities of daily living,” like breathing, eating, or going to the bathroom. (The state also requires recipients of medical parole to be over the age of 60 and to have served at least 25 years in prison.) Mississippi requires inmates to be bedridden to be eligible for release.

Many of the rules are complex, or worse—vague. New Hampshire says that only terminally ill prisoners whose medical costs are “excessive” may be released, but the state doesn’t define what would make a medical bill “excessive.” Montana says non-terminal inmates seeking release must require “extensive medical attention,” but similarly does not elaborate.

Other states exclude inmates unnecessarily, according to the report. Louisiana will not release anyone whose illness is contagious, for example. Alaska bars inmates who have been convicted of sexual assault or abuse. New Jersey’s list of crimes that disqualify prisoners for early medical release is “lengthy,” according to the FAMM report.

Many states that do offer guidance and detailed regulations for compassionate release have complex review processes that lead to delays that ill inmates pay for with the little time they have left.

Some states that only grant compassionate release to the terminally ill require doctors to have given a prognosis of 30 to 60 days, but because the review process can sometimes take months in states without deadlines, “it is virtually impossible for a prisoner with a short time to live to survive long enough to hear the decision,” according to the report.

There are policies worthy of replication, however.

The report singles California out as a state that safeguards against delays.

“California lays out time frames within which assessments, reviews, and recommendations must occur for medical parole cases,” says the report. “The expectations and steps taken seem clearly set out and specific and, because they are time-limited, may keep cases from languishing without action.”

Price and her team also praise California’s rule that directs doctors to seek out and recommend inmates who may be eligible for release.

The report also lauds New Mexico for requiring prison staff to automatically give all inmates over the age of 65 a copy of the state’s geriatric parole policy and forms to apply for the parole program.

Each prisoner should receive information on compassionate release, the report says, and prison handbooks should include regulations and eligibility criteria, as well as directions for applying for early medical parole.

States should collect comprehensive data each year, too, on applicants, approvals, denials, and demographics.

Price and her team also recommend prisons help participants create a plan for pre- and post-release. The plan should include tasks like applying for supports like public assistance, health care, veteran’s benefits, and housing, and placement in a medical facility.

“It’s cruel and wasteful to continue to incarcerate people who no longer pose a threat to our society,” Price says. “Over the years, most states have attempted to create some form of an early release mechanism for those in need. However, all could be improved, and it is our hope that this will serve as a guide for policymakers nationwide.”