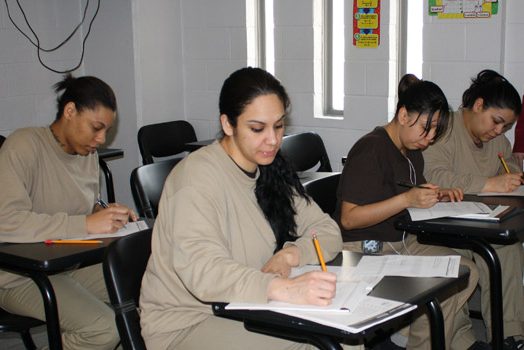 A new report from the Urban Institute shines a light on how 41 states do or don’t address pervasive issues of trauma and victimization for imprisoned women.

According to the nonprofit Prison Policy Initiative’s latest annual “whole pie” analysis, there are 231,000 women and girls incarcerated in the United States on any given day — about half in jails, and half in prisons. (Each year, about 81,000 people are released from women’s prisons and 1.8 million are released from local jails.)

But because there are far fewer women in jails and prisons than there are men, too few programs, services, and policies are geared to meet the needs of women and girls, including critical services that address the trauma and victimization that often leads women to lockup (where they are often retraumatized).

Over 60 percent of locked-up women are mothers with children under 18. Most of those women were the primary caregivers for their kids before they were incarcerated.

In California, 92 percent of women in state prisons report that they have experienced physical or sexual abuse from men.

With financial help from the National Institute of Justice, the Urban Institute looked at how prison systems identify and address victimization inside women’s prisons, what victim services exist in those prisons, and what programs and partnerships promote healing and safety.

Researchers found that out of 41 state DOCs, 15 used gender-responsive risk assessments that ask about past trauma during intake. The report urged the other states to adopt the risk assessment tools and to include questions about traumas that occurred prior to incarceration.

Corrections staff said they generally learn about incidents of victimization behind bars through hotline reports, and written and verbal reports from the victims or their peers. Prison officials should do more to train staff to identify signs of in-custody victimization “rather than over-relying on self-reporting,” according to the report.

State DOCs said that in cases of alleged victimization in women’s prisons, medical staff, local rape crisis centers, or hospitals will see the victim to conduct forensic exams, and test for STDs and pregnancy.

For in-custody victimization as well as past trauma, the most common support system is mental health treatment, according to the report. Yet, the DOC leaders and incarcerated people that Urban Institute interviewed said that these services were often limited by staffing issues, infrequent mental health visits for prisoners, and a lack of expertise regarding sexual assault, among internal staff members.

Two major impediments to prisons’ ability to be trauma-responsive, according to the report, were the “undermining of the validity of incarcerated women’s personhood and victimization experiences,” and “staff violence against women.”

While some state prison systems provided victims with legal services and access to victim advocates, many of the incarcerated people UI spoke with said that more crisis intervention and legal assistance are needed.

Incarcerated interviewees told UI of gaps in services for specific needs, including programs addressing PTSD, positive sexuality, and programs tailored to the needs of people who identify as LGBTQIA+. Report authors recommended these services be boosted, and that correctional institutions do more to address the unique needs of people in women’s prisons who are not cisgender, including transmen, transwomen, nonbinary people, people who are gender nonconforming, and others who identify as LGBTQIA+. “People in these communities have unique victimization needs and are more likely to have experienced childhood sexual assault and in-custody sexual assault,” the report states. “Given their heightened risks, correctional practices should work to prevent their continued victimization.”

The report also urges DOCs to ramp up their use of sexual assault response teams (SARTs), which not only investigate alleged assault and abuse incidents, but also connect victims to critical services. Additionally, prison systems should increase collaboration with community-based services and state domestic violence and sexual assault coalitions.

The researchers took a closer look at the practices and programs of 15 “standout” prisons that “seemed to implement innovative and/or comprehensive approaches to address trauma.”

Each of these women’s prisons had at least one evidence-based trauma-informed program in operation. Some had programs meant to specifically address the effects of domestic violence and human trafficking. Others offered trauma-focused substance use treatment. Some prisons use peer mentoring programs, in which other incarcerated people offer coaching and support to those in need.

“A burgeoning body of literature suggests that implementing gender-responsive and trauma-informed care to better reflect this profound shift in incarcerated populations will aid in successful reentry, restore women’s health and well-being, and enhance prison safety and security,” the researchers note. “Innovative approaches to programming and practices are paramount to ensure adequate treatment and to reduce recidivism.”