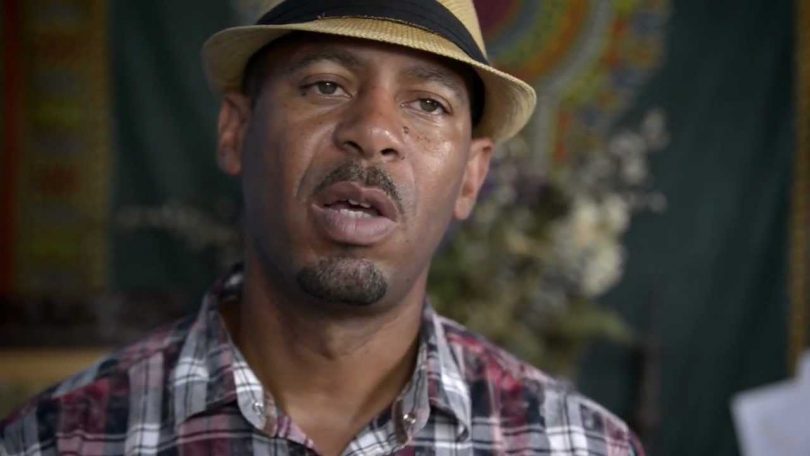 Aqeela Sherrills, a former Grape Street Crip, who was one of the primary architects of the famous Blood-Crip truce of 1992, has been working for nearly three years to lower gun violence in Newark, New Jersey, as the creator and director of something called the “Newark Community Street Team” or NCST.

Sherrills, who lives in Watts, originally came to Newark at the invitation of Mayor Ras Baraka to create a small pilot project to address the city’s violence at a time when Newark’s police department was being investigated by the feds for “troubling patterns” of the use of excessive force, along with mountains of complaints about cops targeting minorities for questionably legal searches, plus allegations that certain officers blithely stole money and property from civilians.

With all this going on, the mayor decided to bring in Sherrills, whom he called “a Godsend,” to jump-start the program that would become NCST. The concept of the new strategy was to train veteran community members, many of whom had served time in jail or prison, to work as “mediators and interrupters” who could de-escalate and diffuse violence before it occurred in Newark’s highest crime areas, among other duties. 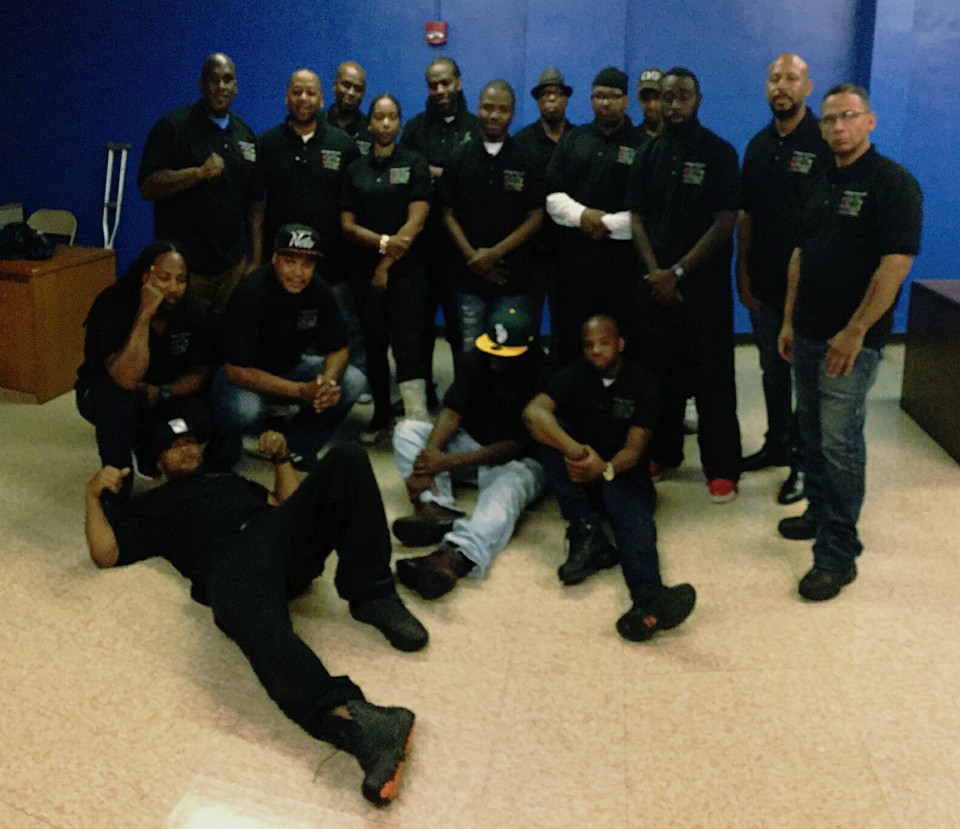 According to Mayor Baraka, around 60 percent of the city’s violent crimes stem from personal disputes.
And personal disputes are among the problems that the NCST team members have been rigorously trained to address through their community relationships. At the same time, the team members have also been tasked with building relationships with community youth and their parents in other ways, such as providing safe passage for students to and from school.

Reportedly, the strategy is working well enough that the Newark police have started to genuinely appreciate NCST’s presence.

Last week, the Wall Street Journal did a short but very good video story on Sherrills and his work with NCST.

However, to understand why LA-bred Sherrills would be chosen to design such a program for New Jersey’s most populous city it helps to know a bit about his personal background.

Since, at WitnessLA, we’ve known Sherrills and his work for a long time, we thought we’d fill in some of the rest of that story.

Aqeela Sherrills was born in the Jordan Downs housing projects of Watts, and came of age in the mid-1980s when gang violence in Los Angeles was headed into its most deadly period. But although Sherrills and his brother Daude, were both Grape Street Crips, Aqeela was able to escape the streets for a few years to go college in 1987. His time at Cal State Northridge was “transformative,” and gave him an expanded perspective, he said.

One of the results of this altered perspective was that when Sherrills came home from school, he was determined to do something about the gang violence that had already killed many of his friends and family members, and was destroying his community.

Daude was his first convert to the idea, and the two brothers gradually began talking to their homeboys about the madness of shooting at young men who were no different from themselves. At first they only talked to the gangsters on their own side of the Crip/Blood dividing line, but eventually, they also began talking to their so-called enemies.

Over three-plus years, Aqeela and Daude picked up more and more converts to the cause, who in turn spread the word still further.

Finally, on April 28, 1992, the day before the Rodney King verdict and the subsequent days of the LA riots, Sherrills and some other homeboys from both sides of the fence managed to hammer out a fragile cease-fire. The cease-fire became a full-blown truce that lasted for around ten years, breaking apart only when a new generation of gangsters came on the scene.

In the meantime, Sherrills and his brother Daude started a non-profit that, among other things, pioneered a school-dropout retrieval and retention program that was subsequently adopted by the state of California.

Sherrills was also prescient in recognizing the now well-documented relationship between personal trauma and violence.

“Violence isn’t between gangs, it’s between people with wounds,” he told me in early 2006.

Aqeela Sherrills can speak with authority about victims and trauma, because he is a crime victim himself, several times over. In addition to the friends and family he lost in LA’s gang wars, as a child he was the victim of sexual abuse–a matter he has spoken about often in public to encourage other men to bring their own childhood abuse out into the open.

Then in 2004, after Sherrills had become nationally known for his violence prevention and other community work, his eldest child, Terrell Sherrills, who at 18 was home on vacation from his freshman year on a full scholarship at Humboldt State University, was shot and killed in what was believed to be a case of mistaken identity when some young gangsters showed up unexpectedly at a party Terrell was attending in upscale Ladera Heights.

Sherrills was no stranger to violence and death. “But nothing prepares you for the death of your child.”

At his son’s wake, a completely shattered but calm Sherrills assured the mourners at the Agape Spiritual Center in Culver city that his son’s killer would be brought to justice.

“But we’re also going to help and forgive that kid,” he said. “We’re going to hold space for the highest possibility of good to show up in him.”

In fact, the young shooter wasn’t caught. But, although Sherrills eventually learned the boy’s identity through street information, he held fast to his belief in forgiveness.

“The conditioned response is to take another life,” he said. “But this eye for an eye philosophy,’ leaves everybody blind. The boy who killed his son, said Sherrills, was “a black boy who was the victim of a culture that doesn’t see him human.”

Determined to find “the gift” in this most terrible of sorrows, Sherrills went deeper into justice advocacy. He founded the Reverence Movement, to help others talk about their emotional wounds, and co-founded the Crime Survivors for Safety and Justice Initiative, which has been prominent in California’s justice reform movement.

He traveled internationally into areas of high conflict.

And he came to Newark.

In Newark, in addition to the violence prevention work his team is known for, Sherrills stresses the importance of making sure that the victims of violent crime get the help they need, including the funds and service they are entitled to, along with help in healing.

Traditionally, he told NJ.com in 2016, “government deploys law enforcement to apprehend the perpetrator, but we don’t deploy therapists and healers and counselors to deal with the after-effects of violence.” And that’s a problem, he said. 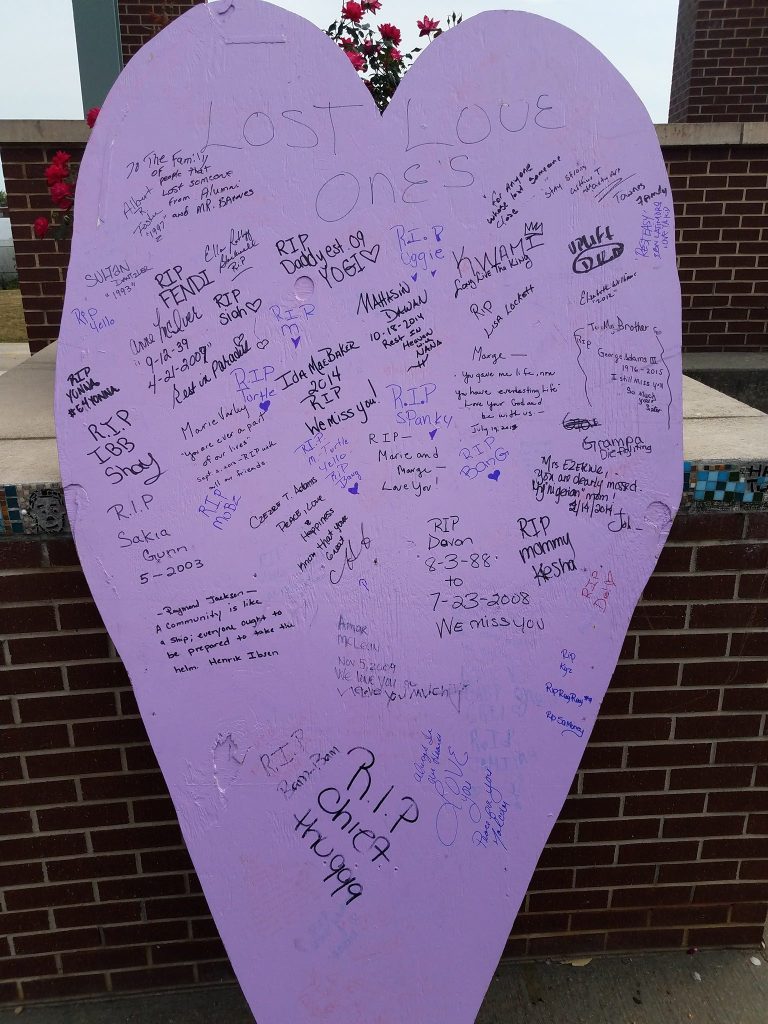 A lot of what Sherrill’s team members do has to do with mentoring youth and young adults who are at risk of becoming either victims or perpetrators of violence, and matching them with needed services and programs. NCST also has a team of specially trained men and women who are sometimes deployed quickly to diffuse neighborhood tensions that are building to violence.

“We’re not police,” Sherrills told the Wall Street Journal last week. “We don’t share intelligence with the police because you can be killed out here” for something like that,” he said. The team’s role is to divert the threat of violence through mediation of disputes, and through facilitating community healing.

These days Sherrills commutes monthly to the South Ward of Newark to check in on the teams that he has trained and organized for the past few years.

He also brought in NFL legend Jim Brown to speak at the NCST team’s August 2017 graduation from Brown’s Amer-i-can life skills program, a program that a much younger Sherrills helped Brown to start decades before.

“I was raised around things that no child should be exposed to,” Sherrills said when speaking about the work he is doing in New Jersey and California and elsewhere. “I understand violence as a public health issue.”

In Newark, the mayor says he hopes to expand NCST, if he can get the necessary funding.

In the meantime, Aqeela Sherrills does his work, which he said is how honors his son Terrell daily.