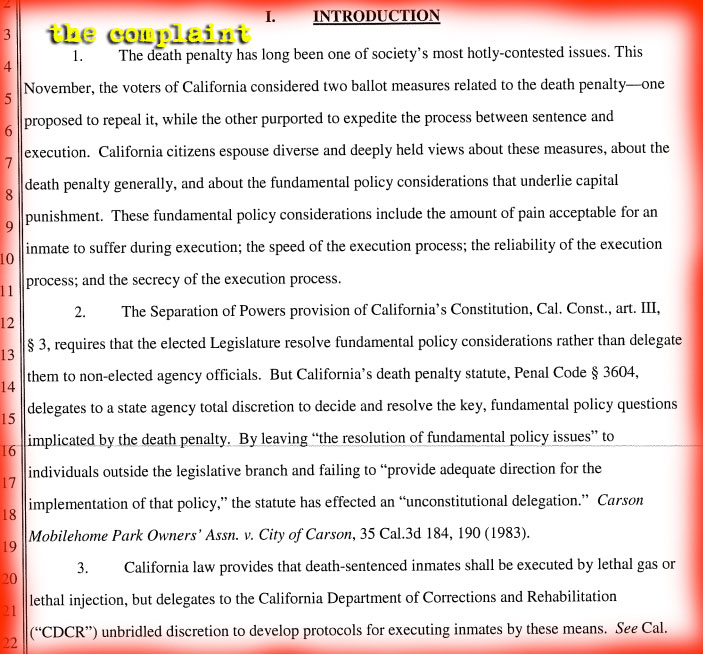 The ACLU of Northern California and the law firm Covington & Burling filed a lawsuit Tuesday that aims to block the state from resuming executions. The complaint argues the constitutionality of CA Penal Code §3604, which gives full discretion to bureaucrats at the CA Department of Corrections and Rehabilitation rather than elected officials to “decide and resolve the key, fundamental policy questions implicated by the death penalty.”

“This law gives unelected bureaucrats too much power and it shields legislators from accountability on the death penalty process,” said Linda Lye, Senior Staff Attorney at the ACLU-NC Foundation. “This case is about one fundamental issue: accountability.”

There are 728 men and 21 women currently on death row in the state.

The ACLU suit calls into question the CDCR’s “unbridled discretion to develop protocols” regarding the use of lethal injection drugs or lethal gas, and the “pain, speed, reliability, and secrecy” of the process.

“The people of California, through their elected leaders, must have a say in and take responsibility for how this irreversible punishment is carried out,” said Mitch Kamin, a partner with Covington & Burling. “Whether or not you agree with the death penalty, there is no doubt that it is irreversible. It cannot be exempt from careful scrutiny in an open forum — the Legislature.”

Leave a Reply to Conspiracy... X