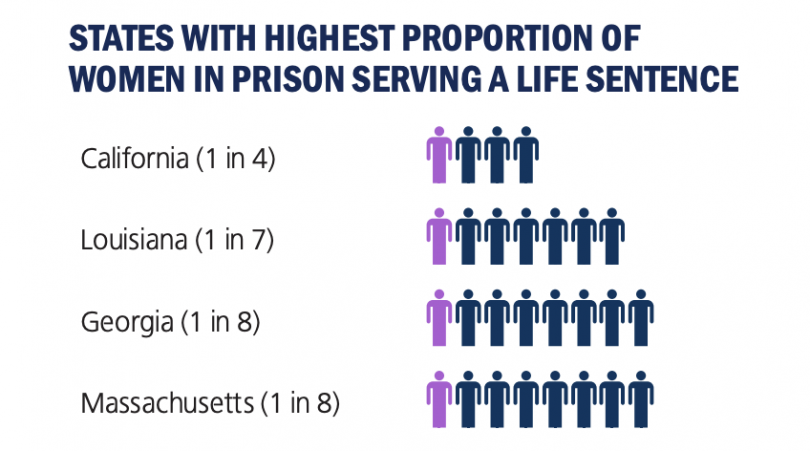 California has the highest proportion of women serving life (or virtual life) sentences in state prisons — one out of every four female prisoners, according to a new fact sheet from the Sentencing Project. The state with the next highest rate of life imprisonment among women in prisons is Louisiana, where one in seven imprisoned women will spend her life behind bars.

Nationally, one out of every 15 of the 111,000 women in prison in the U.S. is serving life sentences. One-third of those 7,000 women are serving sentences that do not offer a chance at parole.

These numbers — as is the case with the overall number of women in prison — are on the rise, despite concurrently declining rates of violent crimes among women.

While men make up 97 percent of the lifer population in the U.S., the number of female lifers has grown exponentially over the last decade.

Between 2008 and 2016, the population of women imprisoned for violent offenses increased by 2 percent. At the same time, the number of women serving life sentences jumped 20 percent.

By comparison, the number of men serving life sentences increased 15 percent during that time.

During those same years, the number of women serving life-without-parole sentences shot up 41 percent, while the number of men sentenced to LWOP increased by 29 percent.

Across the nation, there are nearly 300 women serving life sentences for crimes they committed when they were minors. Three states are responsible for half of those life sentences: California (80 women), Georgia (23 women), and Texas (42 women).

Often, women and girls who commit violent acts are victims, themselves, of physical or sexual abuse, or both. More than one-third of female lifers have attempted suicide at least once.

When the Sentencing Project surveyed people serving LWOP sentences for crimes they committed as kids, 80 percent of women said they had previously experienced physical abuse, 77 percent said they were the victims of sexual abuse, and 84 percent said they had witnessed violence at home. A separate study of California women convicted of murder who had survived intimate partner abuse revealed that all but two of the women were given life sentences. Six of the women were sentenced to LWOP. While the other 34 women had received minimum indeterminate sentences carrying between 7 and 15 years in prison, all of them had already served 25 years at the time of the study.

The expanding population of women living behind bars for all — or nearly all — their lives is in direct conflict with the national movement away from mass incarceration born from, among other factors, tough-on-crime policies, and racism.

“The unprecedented growth of life sentences in the United States runs counter to declining crime rates and growing challenges to mass incarceration,” according to the Sentencing Project. “The overwhelming majority of individuals who commit crime — even serious crime — will “age out” of criminal behavior, and their continued incarceration diminishes returns on public safety.”