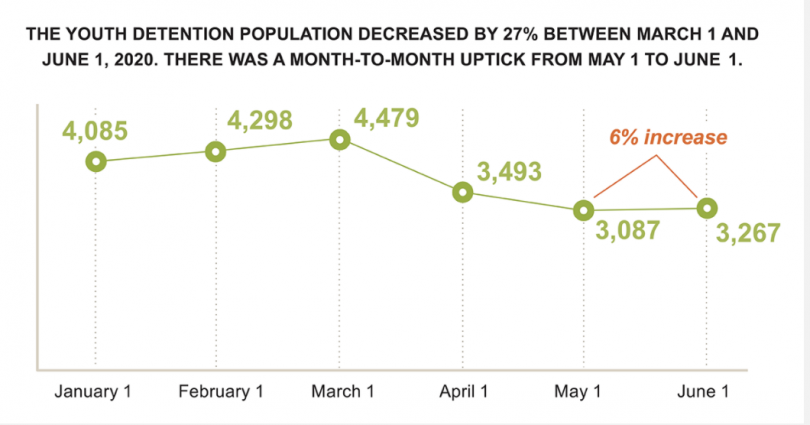 An April survey of juvenile justice agencies in 30 states showed a 24 percent decrease in the local juvenile detention population — from 3,713 to 2,828, between March 1 and April 1, 2020, as the pandemic came into focus and government leaders took action to slow the the spread of coronavirus.

That downward trend, revealed in the Annie E. Casey Foundation’s survey, continued for another month to May 1.

After falling precipitously over that two month-period, however, a fresh survey found that the number of kids in juvenile detention facilities in the U.S. had started to tick back up again — 6 percent between May 1 and June 1.

The initial beginning-of-quarantine drop was mainly tied to the cessation of admissions to lockup (which decreased 50 percent from February to May), not because of large-scale releases. Yet, the fact that most local and state governments have resisted releasing kids early so that they can be with their families during a pandemic has led to a small but still significant increase in the juvenile justice population.

This latest Annie E. Casey survey captured responses from juvenile justice agencies in three additional states, a total of 33 states. The jurisdictions accounted for approximately one-third of all youth held in juvenile detention on any given night.

According to ongoing data gathering from The Sentencing Project, at least 943 kids and 1,044 staff have tested positive for coronavirus in juvenile lockups across the nation as of July 10. 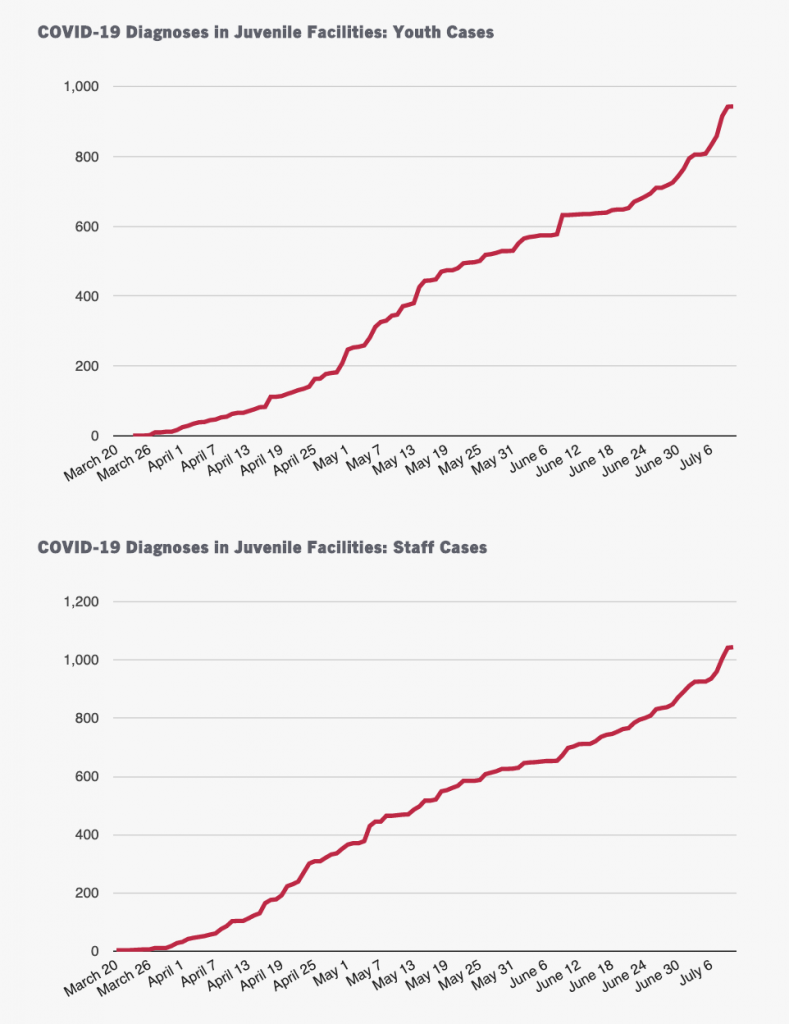 The infection numbers in youth lockups have continued to explode upward since the beginning of April. But it didn’t have to be this way.

“These data demonstrate how critical it is for juvenile justice systems not only to keep young people out of detention facilities but also to act with urgency to get young people out,” says Nate Balis, director of the Annie E. Casey Foundation’s Juvenile Justice Strategy Group. “A more equitable youth justice system requires intense focus on releasing Black youth from detention.”

The vast majority of these confined kids are in locked correctional facilities, including juvenile detention centers, long-term secure facilities, and adult prisons and jails.

As of Friday, July 10, a total of 30 kids and 42 staff in LA County’s juvenile probation lockups had tested positive for the virus. A total of 29 additional kids were under medical observation after displaying COVID-19 symptoms and/or while awaiting test results.

While a handful of jurisdictions released a portion of the kids in their custody to protect them — and facility staff and the public — from a coronavirus outbreak behind bars, Los Angeles County and most others have not.