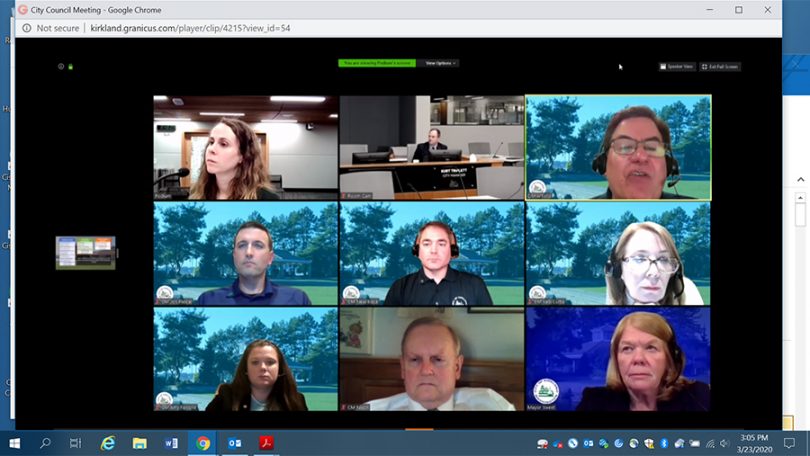 Elected officials are figuring out Zoom just like the rest of us.

Some of the most important legislation states and cities enact to fight the coronavirus pandemic will be passed on grainy video chats or glitchy conference calls, using processes that have never been tested.

Policymakers around the country are quickly learning how — or whether — they can cast votes remotely, a method that could prove crucial to responding to the pandemic while maintaining social distancing guidelines.

The Seattle City Council has held meetings remotely since March 9, as Washington state suffered the earliest fallout from the virus. The Council passed bills to stop evictions of renters and small businesses, expand sick leave, bolster businesses and artists and provide relief to utility ratepayers — all while meeting over a Skype audio line.

“There’s been some technological catch-up,” Councilmember Teresa Mosqueda admitted, “but the Council has been able to do its work in real time in a collaborative way in the last two weeks, and I don’t think being remote has hindered that.”

Several states passed rules to allow their legislatures or local governments to vote remotely, and lawmakers are testing video chat and teleconference technologies that might allow them to hold emergency votes from afar.

But some legislatures have found themselves bound by state constitutional rules that require them to meet in person, and officials at every level are debating whether virtual meetings comply with public access and transparency laws. 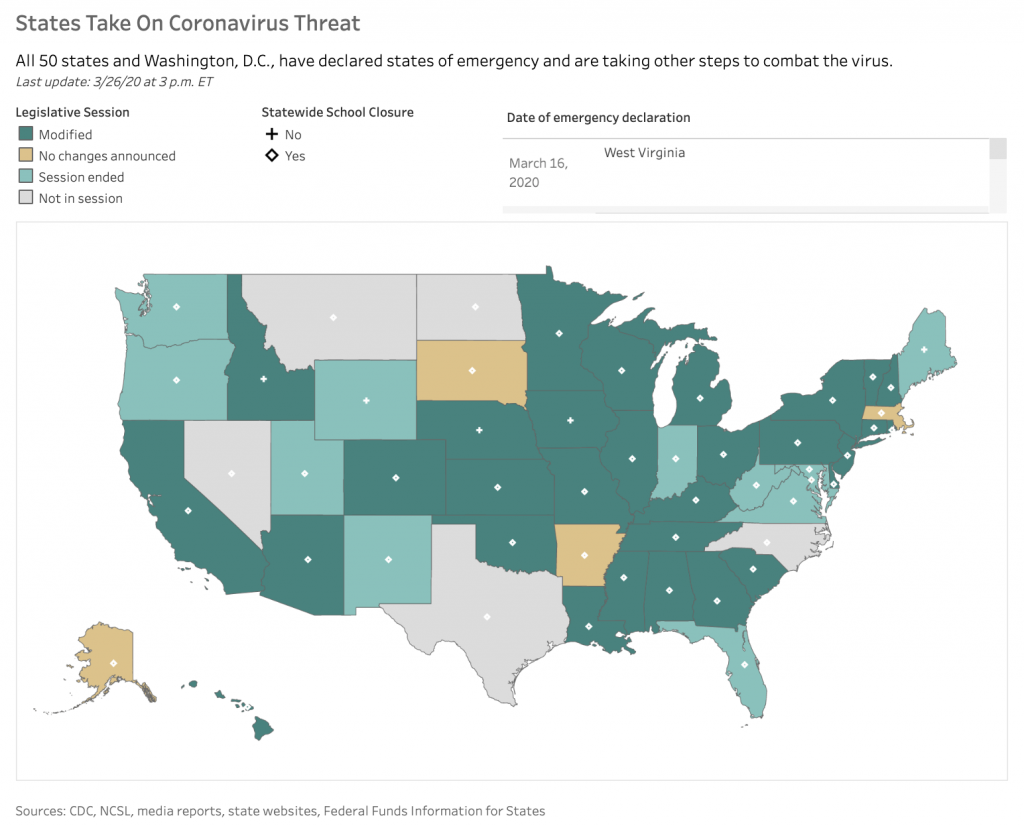 Meanwhile, after several members of the U.S. Congress tested positive for the virus, some lawmakers pushed to allow the House and Senate to vote remotely, though a report by House Democratic leaders this week said doing so “would raise serious security, logistical, and constitutional challenges.”

While many legislatures meet only part-time, city and county governments — as well as school boards, fire districts and the like — often need to vote on a regular basis. In several states, governors and legislatures have acted to ensure local governments have the authority to conduct business remotely.

“We wanted to strike a balance between the public health and safety considerations and basic notions of transparency,” said Luke Britt, the state’s public access counselor.

The order limits remote votes to “essential” business, meaning cities can’t use the provision to sneak through a controversial zoning ordinance. Britt said he has encouraged local governments to provide a way for the public to submit comments electronically, while livestreaming meetings if possible.

In Michigan, Democratic Gov. Gretchen Whitmer also allowed for local bodies to vote electronically, while the legislature in Oklahoma passed a bill allowing teleconferencing options. Colorado is exploring whether electronic forms of communication comply with the state’s open meetings law.

In Seattle, where the City Council started meeting by phone more than two weeks ago, Mosqueda said it took some time to work out the kinks of the process — and that other cities need to start making remote voting plans now, so they’re not paralyzed if they can’t meet in person.

“The lesson for the rest of the country is that we were probably a few weeks late in implementing what we needed to do,” said Mosqueda, who was serving as temporary president when the Council decided to meet remotely.

Seattle officials had to ensure that the public could participate, that staff members could help with bill analysis and that meetings were still broadcast. Seattleites can send comments by voicemail or email. It took some test runs — both with the technology and the procedures — to get the Council ready for live remote meetings.

“The more they do it, the more savvy they become,” said City Clerk Monica Martinez Simmons. “The biggest thing is — almost like a radio show — consider your audience and the way they’re receiving this information.”

Mosqueda said the process has had its hiccups but is better than the alternative.

“It is always a challenge when you can’t have an in-person conversation with someone,” Mosqueda said. “But there is no piece of legislation worth risking your life or your staff’s life when there are plenty of ways to participate remotely.”

Nearby Kirkland, where the coronavirus killed nearly three dozen nursing home residents, held its first remote City Council meeting March 17. Councilmember Toby Nixon said the video meeting was effective for conducting business, though the broadcast that reached the public was “glitchy” at times.

The city provided a video feed in the lobby of City Hall for residents without internet access, but only one person showed up to watch.

Nixon, who also serves as president of the transparency watchdog Washington Coalition for Open Government, said Kirkland wants to ensure its process is as open as possible. The City Council allows residents to submit public comments by email, voicemail or video message, all of which are read or played at the meeting. The Council also votes by roll call, so each member’s position is clear.

“We basically said, ‘We have to set the example and not even be in the room together,’” Nixon said.

State legislatures can expect to work through the same challenges that Seattle, Kirkland and several other Washington cities are fine-tuning now.

Even before the coronavirus crisis, Oregon and Wisconsin had rules in place allowing their legislatures to vote remotely in emergency situations, making them outliers. Both legislatures are troubleshooting their systems, knowing the pandemic may require a special session.

“We’ve got the concept, we’ve tested the concept and had a walk-through a couple days ago, and it’s looking good,” said Wisconsin state Senate President Roger Roth, a Republican. “It’s not perfect, the video won’t be perfect, but it will absolutely convey to the public everything that’s happening.”

Under the method Roth helped devise, all 33 senators will call into a single videoconference on their state-issued laptops. Wisconsin’s remote voting rules require that lawmakers have voice or video communication and have an outlet for the public to monitor proceedings. Virtual sessions are to be broadcast on WisconsinEye, a public affairs cable network.

The Wisconsin legislature delayed the end of its session as the pandemic spread across the country, and the Senate still needs to act on more than 100 bills passed by the Assembly, Roth said.

“If things progress the way they look to progress, I don’t know how any legislative body in the U.S. will be able to come into their chambers and do business,” he said.

Roth said the virtual-vote plan has been mostly accepted, but it’s not been without opposition.

“I don’t want to be calling in on a teleconference trying to take care of important business,” state Sen. Tim Carpenter, a Democrat, told the Wisconsin State Journal.

Carpenter, who urged the legislature to meet in person as soon as possible, did not respond to a request for comment.

Oregon’s rules for remote voting, Chief Clerk of the House Timothy Sekerak said, require lawmakers to be “distinguishable and intelligible,” and the proceedings need to be available for the public to witness.

Other states, including Utah and Pennsylvania, have quickly passed rules to allow legislators to conduct virtual votes. Mark Thomas, chief of staff for the Utah Senate, said the details of remote sessions are still unclear, but lawmakers wanted to give themselves the option to do so.

“There’s a lot of logistical things that we’re still reviewing, but we at least have the constitutional and rulemaking authority now,” he said. “‘How does the public actually get notice? How are they able to participate? What if they have questions or issues? How would the voting actually occur?’ There’s obviously security concerns.”

Thomas said the Utah legislature is likely to hold a special session later this year, and it’s still unclear whether it will be conducted electronically.

Next week, the South Dakota legislature will meet over teleconference to consider action on vetoes, as well as emergency measures to respond to the pandemic.

The Pennsylvania legislature has adopted rules for remote voting, though some party leaders must still be present.

In Arizona, a House measure would allow some lawmakers to vote remotely, but the system can accommodate only a handful of participants at a time — and Democrats assert the move is designed to ensure Republicans can preserve their thin majority even if a few of their members can’t attend.

Meanwhile, New Hampshire lawmakers overwhelmingly voted down remote voting, amid concerns it would violate the state Constitution. Many states, including Florida, Minnesota and New York, require lawmakers to meet in person, according to the National Conference of State Legislatures.

Open government advocates acknowledge the extraordinary nature of the pandemic.

“Nobody can be a purist and insist that everything must be business as usual when nothing is business as usual, so public bodies are certainly entitled to a little wiggle room on formalities as long as it remains unsafe to cram people into meeting rooms,” said Frank LoMonte, director of the University of Florida’s Brechner Center for Freedom of Information.

Many state attorneys general have issued guidance in recent days, instructing local governments how to meet remotely and comply with their state’s open meetings laws. The Wyoming Press Association also weighed in, noting that meetings should be available to the public electronically and on a toll-free call-in line for those who don’t have a computer.

On Tuesday, Washington Gov. Jay Inslee, a Democrat, suspended portions of the state’s open meetings law. Governments are no longer required to make their meetings available at a public facility, if they’re responding to the emergency or conducting “necessary and routine matters.” Additionally, officials no longer must provide public records at their facilities, many of which are closed.

In an email, LoMonte said governments that vote remotely should seek to postpone any matters that aren’t time-sensitive and make sure the public can be heard, “even if it’s clunky and imperfect.”

But even transparency experts aren’t unified on all the details. While LoMonte advised limiting remote meetings to essential and emergency business, Nixon — the Washington state open government leader — said it’s important to continue even the mundane work.

“We’re trying to lend that air of normalcy as much as possible,” Nixon said.

Nixon added that it may be harder for small and rural local governments to set up remote meeting technology, and they likely have more constituents who can’t access the internet to watch a livestream. He also raised concerns about ensuring public records are retained when officials work from home.

Another consequence of governments working from home, LoMonte noted, is that public records requests may be delayed.

“Honestly, this is an opportunity for agencies everywhere to do what they should’ve been doing for years anyway: Pushing out key documents and databases online before they’re requested,” he wrote.

Editor’s Note: In California, on March 16, state legislators voted to pass two bills totaling $1.1 billion in relief for hospitals, schools, and local governments impacted by coronavirus. Lawmakers then unanimously voted to suspend the legislative session until April 13, with options to return earlier or extend the break, if the governor “declares that continued home isolation is, or similar preventative measures are, necessary to address the current state of emergency.” It is not yet clear if or when the legislature will take the public hearing and voting process into the virtual realm, but as the June budget deadline nears, if the state’s stay-at-home order is still active, lawmakers will have to figure out ways to adapt.

At the local level, the LA County Board of Supervisors will hold its first virtual meeting on Tuesday, March 31, after two weeks of canceled meetings. Members of the public wishing to address the board can submit written public comments via email or physical letter.

After two canceled meetings, the LA City Council held its first remote meeting on Friday, March 27. Members of the public wanting to participate were able to submit their comments by calling into the meeting, or by submitting written comments online.

This story was originally published by Stateline, an initiative of The Pew Charitable Trusts.

Image by City of Kirkland: Members of the Kirkland City Council in Washington meet remotely.