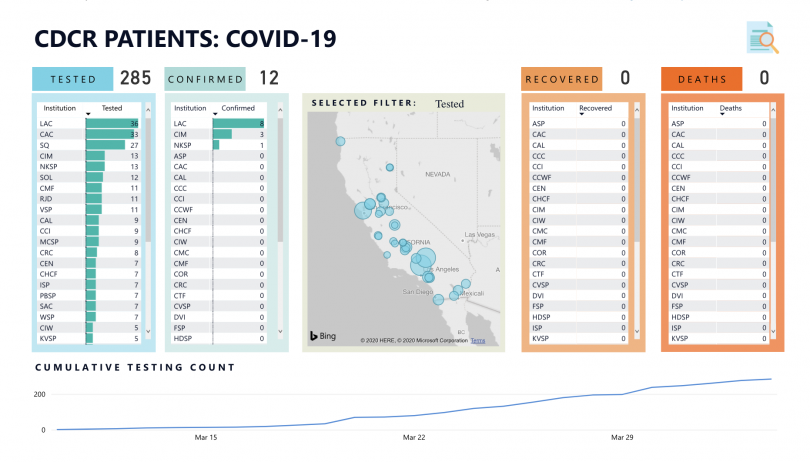 UPDATE: As of April 3, there were twelve prisoners with COVID-19 diagnoses, triple the count recorded four days earlier, on March 30. A total of 285 prisoners have been tested, so far. Forty-two prison employees have tested positive for the virus.

On Tuesday, the California Department of Corrections and Rehabilitation (CDCR) announced that up to 3,500 prisoners would be shortlisted for “expedited parole” in response to the spread of coronavirus through the state’s prison.

As of 5:50 p.m., on March 30, there were four adult prisoners who had tested positive out of a total of 243 tested, and 22 CDCR employees with COVID-19, half of whom are at the California Institution for Men in Chino.

Multidisciplinary teams convened to expedite the release process within the state’s prisons will first review the cases of those with less than 30 days remaining on their sentences, and then those with less than 60 days left. Only those “not currently serving time for a violent crime as defined by law, a person required to register under PC 290 (sex offenses), or domestic violence” will be granted early release.

On top of the expedited parole plan, Governor Gavin Newsom’s executive order suspending transfers from jail to prison is expected to reduce the state’s total prison population by 3,000 people in the next 30 days, according to the CDCR.

Reducing the state’s prison population by 6,500 people is a reduction of a little over 5 percent.

The CDCR also says it will “immediately expand space in community-based parolee programs, particularly for those at risk of homelessness or housing instability.”

Additionally, the state’s more than 120,000 prisoners are now receiving hand sanitizer — previously withheld as contraband — in hope of reducing the spread of the virus. The department reports it has also increased social distancing efforts by reducing the number of people allowed in common areas at any given time. This doesn’t solve the problems arising from the fact that 40 percent of the state’s prisoners are housed in often-cramped dorm-like quarters. To that end, the department is reportedly working to move around 500 prisoners out of dorms.

Prison employees are also now submitting to temperature and verbal screenings before they enter prisons and other CDCR facilities.

We’ll have more on the issue soon.