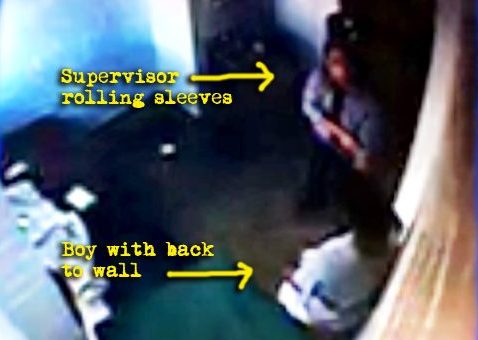 LA County Chief of Probation Terri McDonald announced in a recent statement that, since a certain video-recorded beating incident of 17-year-old by by staff “came to light,” the department has “initiated a sweeping internal investigation,” which has, according to McDonald, turned up “seven other force incidents at Barry J. Nidorf Juvenile Hall” in which probation employees “appear to have acted outside of policy” by using “unauthorized or excessive force, being misleading/untruthful, or both.”

The matter McDonald pointed to that she said triggered the investigation is the April 24, 2016 beating Witness LA first reported last summer. In this use-of-force episode, which also took place at Barry J. Nidorf Juvenile Hall in Sylmar, four male probation officers appear to slug, push, and kick an unresisting teenager as a supervisor looks on. The slugfest was caught on video by a camera mounted in the boy’s room, and several sources leaked 4:18 minute copy of the crucial part of the disturbing video to us.

McDonald’s announcement came after District Attorney Jackie Lacey’s announcement last week that two probation staff, one of them a supervisor, had been charged with assault for their part in the Sylmar video beating.

A Supervising Detention Service Officer named Sergio Cano, 45, was charged on Wednesday of last week with one count of assault under color of authority. Cano pleaded not guilty to the charge.

Then the next day, Lacy’s office announced that Deputy Probation Officer Timothy Boundy, 42, was charged with three counts of assault under color of authority.

It seems that, in addition to the April 2016 video beating, Boundy is accused of assaulting another teen on Feb. 8, 2016, after the boy tried to leave his room. Then on Oct. 8, 2015, Boundy reportedly grabbed a third teen, threw him to the ground and hit him.

According to LA County Probation a third department member is also facing charges of assault under color of authority for the videotaped beating. Probation did not release the third man’s name, but we have since learned it is Carlos Antonio Portillo.

It is heartening to hear that after nearly a year, arrests have finally been made, and that rigorous internal investigations are taking place.

But, according to our own investigations, those seven force incidents are likely not the only ones waiting to be found. Head in hands after the beating

Are There More Incidents Beyond the 7 Discovered?

Subsequent to our reporting on the April 2016 Sylmar video beating, we discovered two more alleged assaults of probationers by staff.

We learned of a May 31, 2016, incident of alleged abuse of a teenage probationer by probation staff that reportedly occurred at Central Juvenile Hall, located on Eastlake Avenue, east of downtown LA. In the incident a staff member reportedly used a boy’s sweatshirt to choke him.

There were no videos of the incident, but there were witnesses. One of the adult witnesses thought the incident serious enough that the staffer called the police. We obtained a written account from that witness. You can read the details here.

In October 2016, sources inside probation told us of still another alleged beating of a probationer by staff. In this third instance, again there was no video. But we spoke to multiple sources inside and close to probation, who said they firmly believed that the reported assault of the teenager did occur, and that efforts were made to cover-up the incident by painting the boy as the attacker. (You can find the details of that alleged incident here.)

In addition to these three, we have heard of still more alleged assaults of kids by staff from parents who have contacted us to ask for help. But without staff corroboration, we felt we could not write about those stories.

Yet, one of the most detailed and credible reports we received allegedly occurred in early 2016 at Barry J. Nidorf Juvenile Hall, the facility where Chief McDonald said her investigation turned up seven additional force incidents against probationers.

Chief McDonald’s Announcement Tells of Force Incidents in the Juvenile Halls, But What About the Camps?

The report, which delved into the experiences of youth in the county’s juvenile facilities, found that some of those “negative experiences” with staff that kids recounted, were just “minor disagreements.’ Some of what was reported was simply “inappropriate behavior” on the part of the staffer. But there were also accounts, according to the report’s authors, of “verbal and/or physical assault.”

In one case, a young man reported a staff member calling his mother his “crackhead ass mom” who “dropped him on his head.” There were multiple reports of staff who “would physically harm or pepper spray youth outside the view of the cameras.”

Several kids told of incidents in which staff reported took other youth to areas where there were no cameras and punched them, to the point that they returned with obvious injuries. Some reported having been punched themselves.

A girl in one facility, Camp Scott, said that “while being restrained by a staff member, a PO picked her up from behind and slammed her on her face leaving a scar.”

The girl said she felt that the male staff should not be allowed to restrain the girls as the male staff would do “extras” or use more force than necessary.

Like most of the kids who reported physical abuse to researchers, the girl refrained from filing a grievance or in any way reporting as she “didn’t want to deal with fallout from staff for the remainder of her program.”

Still other kids reported being punitively pepper sprayed at close range for minor infractions, and without an “OC warning,”

Additionally, wrote the report’s authors, some probationers told researchers “that the staff instigate fights or arguments between youth by telling the whole dorm who the new youth is affiliated with. Youth say that staff have encouraged ‘enemies’ to fight to ‘get it out of their system.’”

Changes on the Horizon

Probation sources tell us the new chief has said privately that she is determined to root out those staff members who are not doing right by their charges.

“The vast majority of our hard-working employees consistently demonstrate their commitment to our clients and our communities,” McDonald wrote, “but we will hold accountable those who do not uphold the Department’s values. The Probation Department will not tolerate abuse of those in our charge.
”
Furthermore, said Chief McDonald, in addition to “holding staff accountable for their unacceptable actions, we also are revamping our systems of training and accountability to ensure that we have adequate check-and-balance systems in place.”

We too know that most of the county’s probation officers are dedicated to their jobs, and to the people they serve. But we applaud Chief McDonald’s determination to make sure that those staff members who believe it’s permissible to do harm to the kids in their care are shown quickly to the door.