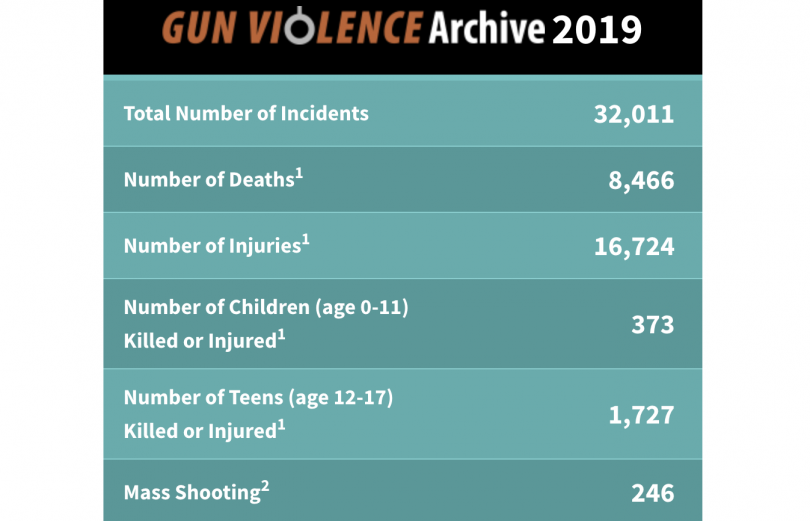 On Sunday evening, at 5:41 p.m., a man began shooting into a crowd of people at the Gilroy Garlic Festival, killing three people–6-year-old Stephen Romero, 13-year-old Keyla Salazar, and 25-year-old college student, Trevor Irby–while injuring 12 others, according to Gilroy officials.

Local law enforcement officers killed the gunman, Santino William Legan, 19, of Gilroy, at the scene.  His motives as yet are unclear.

Including the garlic festival, there have been more than 240 mass shootings in the U.S. this year, according to the national Gun Violence Archive. (The site characterizes a mass shooting as a shooting in which four or more victims were injured or killed in a single incident/event, excluding the shooter.)

Three days before the Gilroy shooting, the National Collaborative on Gun Violence Research announced $10 million in funding for 17 research projects around the U.S. focused on uncovering long-buried answers to questions about the nature of gun violence, through rigorous data-gathering and analysis.

This critically important funding intends to fill a gaping hole in gun violence research after a more than two-decade-long ban on federal funding for such research.

In 1996, under intense lobbying from the National Rifle Association, Congress agreed that gun violence was not a disease, and thus, did not fall under the domain of the Center for Disease Control or the National Institute of Health, although, at the time, both the CDC and NIH rightly viewed the nation’s approximately 30,000 yearly gun deaths as a public health issue. This effectively dried up gun violence research in the U.S.

Last year, however, President Donald Trump’s 2018-2019 spending bill handed the authority to research gun violence back to the CDC. In 2018, when the Arnold Foundation announced the national collaborative with an initial $20 million in funding, said it hoped the philanthropic project, which is administered by RAND Corporation, would kickstart the feds’ own funding of firearm violence research.

“America needs evidence-based answers on the causes of gun violence and how to prevent it,” the collaborative’s director, Andrew Morral, said. “These research projects, selected first and foremost for their rigor, will generate evidence for informing policy that protects the public and preserves the rights of responsible gun owners.”

Together, these studies will help inform policymakers, police departments, school officials and families in their decisions about gun safety and use, the collaborative says.

The largest sum, a pot of just over $2.1 million, will allow Yale University researchers to follow the trajectories of domestic violence offenders with guns and their female victims “with the aim of understanding the impact of exposure to guns used in threatening, coercive, or intimidating ways.”

The collaborative also awarded $1.67 million–the only other award over $1 million–to the Center for Court Innovation, which seeks to understand the “socio-cultural” factors at play behind gun violence. Researchers plan to interview 750 youths in Baltimore, Detroit, Las Vegas, New Orleans, and New York City to gain a better understanding of how and why young people get their hands on guns and use them, and what strategies might help build community resilience against firearm use.

A University of Chicago research project will conduct a national survey of law enforcement agencies to pinpoint the number of times officers shot at civilians, as well as the number of times civilians shot at police, over the last two decades, and the individual aspects of each shooting. The collaborative awarded $649,869 to conduct the survey and analyze its results.

Another project conducted at the University of Chicago will use $570,240 to develop a police training program, in partnership with the Chicago Police Department, focused on improving “officer decision-making in high-stakes situations for the safety of officers and community members alike,” according to the collaborative.

Gun control laws and policies are also going under the microscope, thanks to the collaborative.

UC Davis researchers will use $612,673 to study the effectiveness of various background check policies at cutting crimes involving firearms.

Another noteworthy grant of $710,189 will fund a three-year University of Michigan study evaluating school programs–including the Sandy Hook Promise Foundation’s “Know the Signs” Program in effect in the Los Angeles Unified School District–that teach kids “to recognize and report potential violence and mental health threats and by increasing social inclusion at school.”

“As horrific mass shootings become all too frequent in this nation and as gun violence continues unabated, the philanthropic community has an opportunity—indeed, a responsibility—to direct its resources toward supporting scientific research into causes and solutions,” the Arnold Foundation stated. The intent is “not to further a political agenda but to support rigorous research”–research that can inform policy decisions focused on “reducing this infuriating and inexplicable crisis afflicting our nation.”