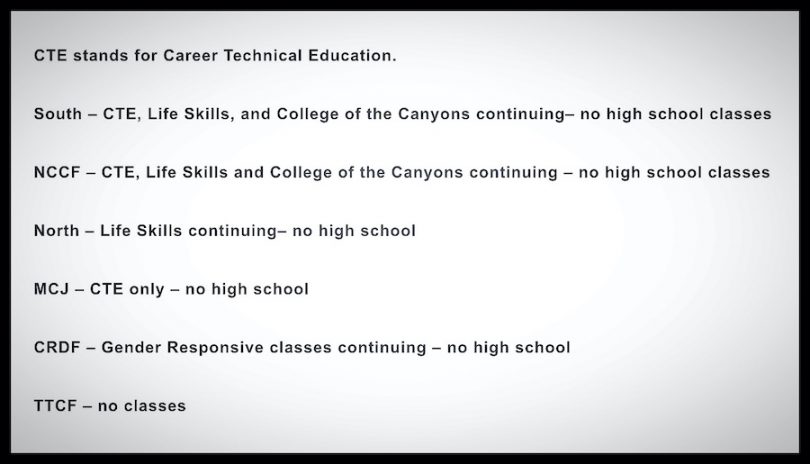 Over the past few days, LA County Sheriff Alex Villanueva has eliminated public visiting, reduced arrests, and quarantined dozens of inmates in an effort to prevent the spread of coronavirus through the jail system. Yet the sheriff’s department is also reportedly still requiring organizations offering programs and services inside the jails to come to work as usual, or else jeopardize their contracts with the department.

LA County Probation, which runs the county’s juvenile halls and camps, has shut down contracted education and rehabilitation programs, including things like art and music classes, to reduce the risk to contractors, staff, and inmates.

The California Department of Corrections and Rehabilitation, too, has shut out volunteers and rehabilitative program providers “until further notice.”

Across the state, K-12 schools have shut down, and most colleges and universities have moved to virtual classes, yet many classes and programs are still in session, and being conducted in-person in LA County jails.

On Monday, the sheriff announced a number of strategies to address the coronavirus risk inside the jails by pausing jail visits, reducing jail churn, and via early release for inmates nearing the end of their sentences. Thanks to these changes, Villanueva said that between February 28, and March 17, the jail population had already dropped from 17,076 to 16,427.

Yet, so far, sheriff’s department officials are taking “minimal precautions” to protect the dozens of contracted workers coming inside the jails, and the incarcerated people and jail staff with whom they come into contact, jail sources tell WitnessLA.

Members of the LASD and contract workers inside the jails have voiced concerns about continuing programming when increased civilian foot traffic in and out of the jails raises the risk of spreading the deadly coronavirus.

In phone meetings over the last couple of days, however, the department has reportedly instructed program facilitators to keep coming in to perform their regular duties. At the same time, sources say, department higher-ups have not yet issued social distancing and hygiene guidelines — or hand sanitizer — for protecting the health and safety of those contractors.

And for those individuals who choose to quarantine or stay home due to their high coronavirus risk status, the department has allowed workers to use their limited paid sick leave to stay home. But when that sick leave runs out, workers will be faced with a tough decision about whether to return to their jobs.

In most other prominent CA counties, sheriffs have made the difficult decision to pulled programming from their jails.

In San Francisco, on March 16, Sheriff Paul Miyamoto suspended programs and services run by community members and organizations, and all events that “compromise safe social distancing” “until further notice.”

The San Diego County Sheriff’s Department, too, announced that among many other health-focused changes occurring in the jails, all reentry service programs provided by non-SDSD staff had been canceled.

Obviously, the issue is a complicated one. Even temporarily cutting services and programs meant to help people develop important skills for successful reentry is a heavy decision for any corrections official to make. On Wednesday, the Vera Institute of Justice released a list of recommendations for jails and prisons to reduce the risk of coronavirus outbreaks. In that report, Vera urged corrections officials to avoid total lockdown if possible, and keep programs running.

“Avoid use of lockdown as a first response and continue programming, classes, jobs, and recreational activities,” the report said. “This is particularly important for children and young adults. Develop a staffing schedule that allows for the same programming to be offered in smaller groups.”

As #COVID19 continues to spread in LA County, we have urged leaders in the criminal legal system to adopt policies that align with the recommendations of experts and protect public health. We have urged that all decisions be made in coordination with public health experts. (1/5)

In a series of Tweets on Wednesday, the LA County Public Defender Union said that while the CDC says that social distancing and “excellent hygienic practices” are the best tools in the fight against coronavirus, “public health experts have said these measures are near impossible for those in carceral facilities…”

With this in mind, the union said it was paramount that judges and sheriff’s officials continue to reduce the number of people who end up in county jails. “For those who are not released, the sheriff must ensure that facilities are as empty and clean as possible.”

In response to WLA’s inquiries regarding continued jail programming, the sheriff’s department pointed to its “Coronavirus Updates” webpage.

As of March 17, there were nine inmates in isolation housing, 21 inmates in quarantine at Men’s Central Jail, and five inmates quarantined in Twin Towers, according to the department site. Dozens of LASD sworn and non-sworn employees had come into contact with the virus and quarantined, as well.

Additionally, the most recent coronavirus update as of March 17, says “everyone who enters our custody facilities” is having their temperature scanned “to help make sure that someone who is potentially infected does not expose the rest of the population.”

Screening for symptoms is not a fail-safe, as many who contract the virus remain asymptomatic, and even in the cases involving noticeable symptoms, infected individuals are contagious before those symptoms appear. Still, some screening is likely better than no screening at all.

Jail sources told WLA these temperature checks had not yet been implemented, however, as of March 18.