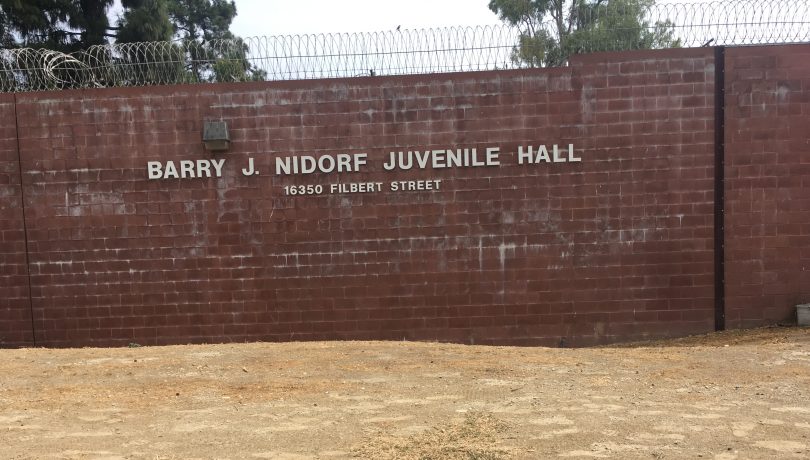 The first report was triggered late last month when officials at AFSCME Local 685—one of the main unions representing officers working for probation—were worried enough by the urgent messages from their members stationed at the Sylmar facility that they sent union representative, Stacy Ford, to visit the hall and  find out what was going on.

Ford went to the Sylmar-located facility—which is colloquially known as “Barry J”—on Wednesday, September 26. His subsequent report was scathing.

The union, however, is in the midst of contract negotiations with the county, so it was always possible Ford was exaggerating. Nevertheless, startled by Ford’s report, along with what they were hearing from other sources, this past Saturday, October 6, five members of the LA County Probation Commission also made a visit to Barry J, and came back with an equally disquieting picture.

Based on what the commission members subsequently reported in a letter to LA County Probation Chief Terri McDonald, which was also sent to all five members of the county’s board of supervisors, Ford wasn’t exaggerating at all.

WitnessLA has talked to our sources both inside the troubled juvenile hall, and others with direct knowledge of conditions at the facility, who confirmed the situation portrayed by Ford and the five commissioners who visited the hall on Saturday—Betsy Butler, Randy Herbon, Joe Gardner  Jan Levine, and Azael “Sal” Martinez-Sonoqui.

According to both accounts, a huge part of the problem at the hall is the fact that there are reportedly too few staff members on duty each day to safely care for the youth in their charge.

Those working at Barry J say that staffing shortages are not just inconvenient, but  have reached what Ford described as “dangerous levels.”

Many units reportedly don’t have the necessary back-up officers, or are being overseen by one officer, when there should be two, so that if something goes wrong in the unit, there’s often no one to assist.

Each day, a surprising number of employees are calling in sick or on disability, thus  leave the staffing critically short, according to Ford’s report, and the accounts given to the probation commissioners, and to WLA.

Furthermore, employees are reportedly quitting or seeking transfers at an unusually rapid rate. As a consequence, the staff who come to work, hoping to do a good job, are reportedly often held over for far longer than usual hours, which eventually results in exhaustion and what appears to be burnout for many.

Furthermore, officers reported not feeling safe in the facility.

Based on our own research, this was reported by veteran officers as well as the newer staff members.

Kids out of control

Matters are reportedly made worse daily due to the fact that the kids in the facility are frequently out of control, threatening to assault officers, making “lewd remarks,” and in general behaving with increasing violence.

There was a recent report of a kid pulling a phone off the wall and breaking it. In other cases, kids broke windows. (The probation commissioners reported seeing door windows boarded up “due to youth having thrown chairs through them,” and noted that other windows that had been “broken and repaired.”)

…an officer in tears in the unit, experiencing some kind of temporary melt down…

In another case, the observers reported walking in on an officer who who was in tears in the unit, experiencing some kind of temporary melt down because of what a kid in the unit had done.  We were also able to confirm this report.

According to two sources, one boy reportedly assaulted a female staff member with a chair, but rather than being transferred to another juvenile hall, or at the very least, to a different unit in the facility, he was instead sent back to the same unit, which a probation source explained is a strategy that is emotionally problematic for both the youth who did the assaulting, the officer who was assaulted—and for other kids in the unit.

…serious violence, vandalism, or routine disrespect and disregard of instructions…

When there are fights between kids, Detention Service Officers (DSOs) reportedly don’t feel they have adequate tools or training to control the situation, and to institute appropriate “consequences” when kids engage in “serious violence, vandalism, or routine disrespect and disregard of instructions.”

Matters are not helped by the fact that a high percentage of the youth sent to the Sylmar facility are in need of mental health services, which according to the probation commissioners “are not available to them in a way that is meaningful,” because Barry J’s mental health staff are, like the rest of the staff, reportedly too few in number to give the needed services to the facilities’ population, and thus are extremely over-extended.

When asked for solutions both officers and supervisors repeatedly said that that they have not received proper training to effectively deal with the kids in their care.

As a consequence, new officers are reportedly “scared” to approach youth and “confront them about their negative behaviors.”

Veteran officers too are not confronting minors when they act out, according to Ford, “out of fear of going under investigation and face the possibility of losing their jobs.”

Our sources made similar observations.

“They were afraid they’d be written up.”

For instance, in the recent past there was a rise in use of pepper spray in some of the juvenile facilities. But now many officers in Sylmar are reportedly fearful of using pepper spray at all.

In a recent situation, according to one of our sources, when a group of kids began “trashing the unit and breaking things,” a supervisor reportedly told staff members to use pepper spray.

“But they refused,” our source told us. “They were afraid they’d be written up.”

Not just any training, the right training

Of course, newly hired detention service officers first must go through weeks of instruction at the department’s training academy, and there are updates on the training.

…if you don’t find a way to connect to them, you’re in trouble…

“But, see, the academy is ‘yes, sir, no sir,’ Marine training,” said a veteran officer at Barry J. “The new hires aren’t trained to speak to the kids.” They don’t learn “how to engender trust,”  and similar skills that are essential for their daily work.

“You have to make that connection with these kids,” he said. “In the end, they’re children.” So if you don’t find a way to connect to them, “you’re in trouble.”

Interestingly, in the last year or so, the department did provide a group of officers at Barry J with a kind of highly-regarded interactive training method that is part of the  ‘Youth in Custody Practice Model,” and similar to the training given to the staff members in the department’s new model facility, Campus Kilpatrick. This method is also favored by the Center for Juvenile Justice Reform at Georgetown University, which has reportedly been helping LA County Probation to implement the training system.

“The staff who had that training loved it, and found it very useful,” said our sources.

But from what we were told, the well-liked new training was never repeated for other Barry J. personnel.

Ford and others reported that both teachers and some of the facilities’ longtime volunteers were expressing serious concerns for the safety of the kids, as well as for themselves.

Some teachers, like the officers, reportedly told Ford they were “afraid of being assaulted” by kids and “are cussed out on a regular basis.”

WLA also heard reports about veteran teachers who used to bring various kinds of teaching aids, supplies, and equipment of their own into the classroom in order to make what they taught more interesting for the youth. But now those same teachers  no longer feel such niceties are either safe or practical.

“I’ve never seen it the way it is right now,” said one of our sources at the hall. “But people still come to the job, and still try.” For a lot of those working at Barry J., he said, “the work is still a calling.”

Yet, at the same time, most staff fear that no one in management is listening to their concerns, sources told us.

With all of the above in mind, on Sunday night, four of the probation commissioners who visited Barry J on Saturday sent an urgent report (that WLA has obtained) to Probation Chief Terri McDonald, and to the offices of all five members of the Board of Supervisors.

“It was our unanimous consensus,” the commissioners wrote, “that the conditions in the Hall are extremely unsafe both for the youth housed there and for the staff. The facility is a ticking time bomb. If both immediate and more long-term changes are not made as quickly as humanly possible, someone in that facility is going to be seriously injured, or the hall will erupt in group violence.”