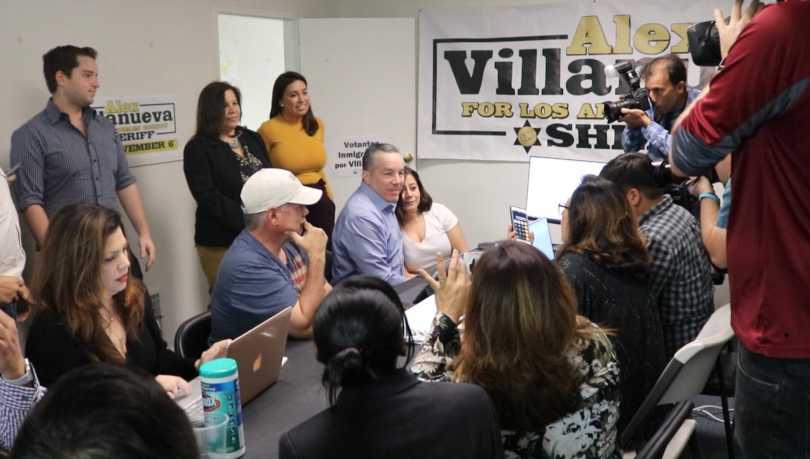 “With a lead of nearly 58,000 votes, we can finally say that there’s a #NewSheriffInTown!” Villanueva tweeted from his East L.A. office. “We owe it all to our volunteers and everyone who supported our campaign. Now the work really begins as I prepare to hit the ground running on day one as your new Los Angeles County Sheriff!”

Villanueva told ABC 7 reporter, Josh Haskell on Friday evening,  that he and his supporters had a chance to “crunch the numbers,”  and to “look at the results,” and thus he believes, he said, that “mathematically, the odds are almost nil that the trend is going to reverse.”

As of this writing, Sheriff Jim McDonnell has not conceded.

And according to the office of the county’s Registrar-Recorder, there are approximately 422,600 ballots left to be counted.

If Villanueva is right about this being the point of no return, what many believed was impossible has just happened: For the first time in 100 years in Los Angeles, the challenger has unseated the incumbent. Oh, and there has never been a Democrat elected to the office of L.A. County Sheriff in 138 years.

While the position is considered non-political, Villanueva and his supporters made a point of referring to the fact that he is a registered Democrat, as opposed to McDonnell’s stated position as an independent, a fact that many—WitnessLA included—thought helped the challenger in a high-intensity mid-term election that was likely to bring out Democratic voters in large numbers.

Villanueva’s campaign was also energetically grass roots in nature, and had him showing up at community events, both crowded and not so crowded, many of them organized by local democratic clubs, at least 36 of which endorsed him.

He also reportedly won 84 percent of the Latino vote, according to UCLA elections expert, Matt Barreto, who spoke to the LA Times.

So is it true, is Villanueva a lock?

The next batch of votes will be counted and announced next Tuesday.  So watch this space.

Meanwhile, in a painful side note, both McDonnell and Villanueva attended the memorial service on Thursday for Ventura County SD Sergeant Ron Helus, who gave his life in the service of his community at the horrific mass shooting on November 8, at Thousand Oaks’ Borderline Bar. Thursday was also the 31st anniversary of Helus’ first date with his wife-to-be, Karen Helus.